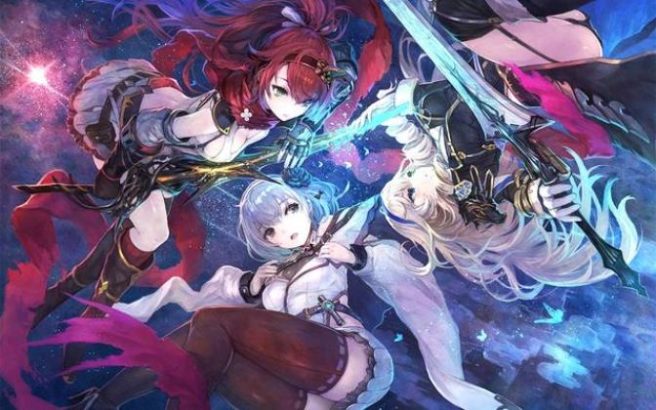 New details are in for Nights of Azure 2. The latest information covers Malvasi (“Queen of the Moon”), The Three Popes, and Lily characters. Find everything rounded up below with screenshots included, courtesy of Gematsu.

Malvasia, the “Demon / Queen of the Moon” (voiced by Yu Shimamura)

– The head of the demons who emerged as a replacement for the Nightlord who disappeared
– She can be sealed away by offering the “Bride of Time”
– It is said that she was a calm demon in the past, but now for some reason seems to be trying to envelop the world in eternal night
– —A being that appears divine
– She addresses Alushe with cold eyes and a disinterested tone

The Three Popes, “The Top of the Curia” (voiced by Reiko Suzuki)

– The top of the Curia, who are trying to offer up the Bride of Time in order to seal the Queen of the Moon
– After reflecting on the dictatorial rule of the former pope, the new popes were established as a three-person parliamentary system to make decisions
– The three popes calmly gaze at Alushe and company through the openings of their majestic outfits
– With light shining through the stained glass behind them, the three popes give off a cold atmosphere during an audience
– Even those that belong the Curia have not seen their faces

– By fighting together and deepening your bonds with Lilys, Alushe’s connection with them will become stronger
– Even Muveil, who is hostile towards Alushe at first, will open her heart through battle and new interactions

A Reliable Ally to Take on a Formidable Foe

– Alushe once admired Muveil like an older sister
– After becoming a demon, she targets Alushe to make her fall to the demons, but after becoming an ally, she’ll fight alongside Alushe as a reliable Lily

Power as a Lily

– As a holy knight of the Curia that fights to the bitter end, Muveil can make use of abilities that specialize in giving players an edge in battle, such as inflicting status ailments on the enemy
– With her active skill “Battle Cry,” Muveil attracts the enemy’s attention to herself and raises her defense power
– In order to trigger a Double Chase collaborative attack with Muveil, a fixed number of enemies must be inflicted with status ailments

– By continuing to battle and performing Lily actions, the bonds between Alushe and the Lilys will deepen

A Helpful Cast of Lilys

– In running through the darkness of the night, Alushe will meet various girls
– In addition to the bonds she was originally cultivating, the girls she will meet after becoming a half-demon will also help her as they head toward confrontation against the Queen of the Moon together

The Power of a Reliable Lily

– By Alushe and her Lily partner attacking enemies and performing cooperative actions like Double Chases and active skills, the tension gauge will rise, and when it reaches its maximum value, you can perform a Lily Burst special move

A Story Filled with Lilys

– By raising your intimacy level with a Lily, a story between Alushe and that Lily will be told, and Lily events will occur. You can also see a sides to the Lily characters that you otherwise would not

The Story of Girls Who Run through the Night

– In escorting her childhood friend and the saint Liliana, Alushe, and agent of the Curia, is killed by the Queen of the Moon and brought back to life as a half-demon
– Alushe follows her heart and decides to defeat the Queen of the Moon
– Carrying the blood sword in her hand, Muveil stands before Alushe
– Muveil was originally a knight belonging to the same group as Alushe, and Alushe admired her as a commanding officer that bravely led her subordinates
– Such a woman once left Alushe profound words
– What is the best thing to do to save the girl who fell to demons?
– Camilla, who is researching half-demons, suggests one possibility
– But at the same time, there is the danger that Alushe might become closer to a demon. And it seems that Camilla is also closely linked to Muveil
– While Muveil weighed on her mind, Alushe moves on ahead in order to obtain information on the Queen of the Moon
– Along the way, Christophorus appears again before her
– A “demon of purity,” Alushe is able to tell that Christophorus is not involved with the Queen of the Moon
– On her journey to find the Queen of the Moon, Alushe and Muveil finally confront each other
– No doubt can be seen in their straightforward gaze. Carrying the same blood sword, and keeping the promise she made with the Muveil she admired like an older sister close to her chest, Alushe commences the battle.
– Alushe, who has overcome numerous battles, relaxes her mind by messing around with two of her childhood friends like they once did in the past
– Alushe has no free time to stand still
– Numerous obstacles await her in the long road she has to travel
– Supported by her allies, Alushe will continue to fight in order to defeat the Queen of the Moon

The Abilities of “Tricker” Servans

– “Tricker” Servans can reduce Alushe’s MP, consume MP to perform Servan actions, perform unique special actions on the field
– These Servans will play an active role in various situations, including proceeding the battle more advantageously and opening new paths
– Shalf, the thunder wolf Servan, can manipulate electricity from within its body. In addition to using this power in battle in ways such as sending electricity through the water fountain to paralyze and deal damage to surrounding enemies, it can also be used to solve field puzzles
– Falfara is a butterfly Servan with elegant, shining wings
– It can pick up Alushe, allowing her to jump high and reach high locations