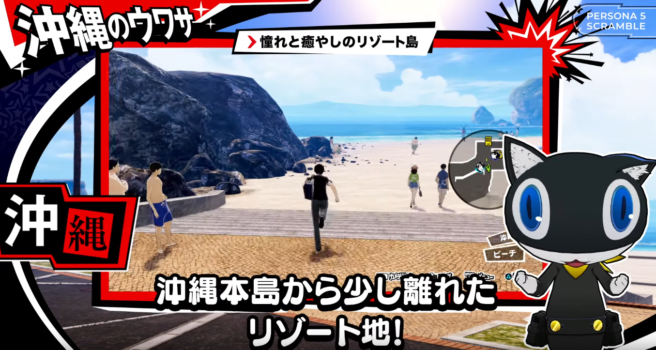 Yesterday saw the release of a new trailer for Persona 5 Scramble: The Phantom Strikers. Today, even more info about the game has been released via the latest “Morgana Travel Report” video. The video shows off the next main location the Phantom Thieves will be visiting – the tropical island of Okinawa, as well as the cooking and requests systems (credit goes to Persona Central for translating the video).

While they’re solving the case of the mysterious Jails, the Phantom Thieves head to Kugojima, a resort island near mainland Okinawa. They’re enjoying a bit of vacation in this tropical paradise, but something seems strange about the residents of the island. The Okinawa Jail takes on the form of an abandoned laboratory. It’s unclear at first what happened here, but voice recorders that were left behind might provide some clues.

You will encounter several obstacles in this Jail – you may have to make use of the so-called Phantom Moves which allow you to do a variety of stealthy actions, such as breaking through panes of glass that are blocking your way. Sometimes, you will also encounter giant locked doors. To get through them, a so-called Hacking Battle will occur. Protect your Navigator from Shadows while she’s hacking the security system of the door.

Briefly glimpsed in yesterday’s trailer, there’s a cooking system called Joker’s Kitchen. Gather ingredients and use them to create dishes that have a variety of effects in combat, such as restoring HP of buffing stats. You can obtain new recipes from event shops and other locations.

Persona 5 Scramble: The Phantom Strikers will be released on February 20 in Japan.