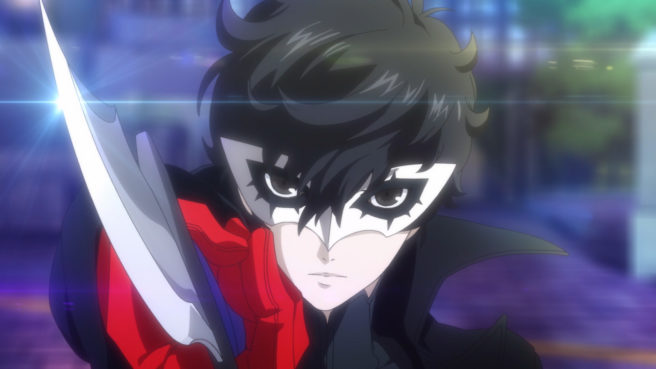 Atlus has issued a new batch of details and screenshots for Persona 5 Scramble: The Phantom Strikers. Today’s update covers the Protagonist as well as Sophia.

– Third-year high school student
– After moving to Tokyo, he got wrapped up in a series of incidents involving psychotic breakdowns and awakened to his Persona abilities
– He formed the Phantom Thieves of Hearts with his friends to reform the distorted hearts of rotten adults, and led a major case full of conspiracy to resolution
– After the case was shut, he returned home, but visits Yongen-Jaya in Tokyo once again for summer vacation
– A dauntless all-rounder with a wide range of attack skills
– Code Name: Joker
– He has high mobility and attack power
– Unleashes quick, close-range attacks with his dagger
– His ability to fight with a wide range of skills is his greatest weapon, and he can use attacks of various attributes depending on the combination
– His initial Persona is Arsene
– He specializes in Curse-type skills and can sweep up enemies with his sinister power
– Joker is the only member of the Phantom Thieves who can freely change Personas
– His wide range of attack skills allows him to strike the enemy’s weak point
– Joker has as many Show Times as he does Personas

– A mysterious girl the Protagonist and others encounter in the other world version of Shibuya
– She seems to have all but forgotten her memory, except for her goal to “become a good friend to humans”
– Often giddy and mysterious
– Her goal to “become a good friend to humans” is genuine
– In order to accomplish that she works hard to support the Protagonist and company
– She can fight with Shadows using abilities that resemble a Persona
– She is a character full of mystery, including the reason why she is in that other world
– Rhythmically connect attacks to sweep up crowds of enemies
– Code Name: Sophie
– In battle, her outfit extends and covers her head, and her hairstyle changes
– She fights using yo-yos, allowing her to swiftly attack a wide range of enemies. For her gun attack, she uses a Blaster
– Sophie fights using floating objects called Pithos, which are similar to a Persona
– She uses techniques of the same property as Bless-type skills
– In addition to Healing-type skills that support her friends, she also has skills that can weaken enemies