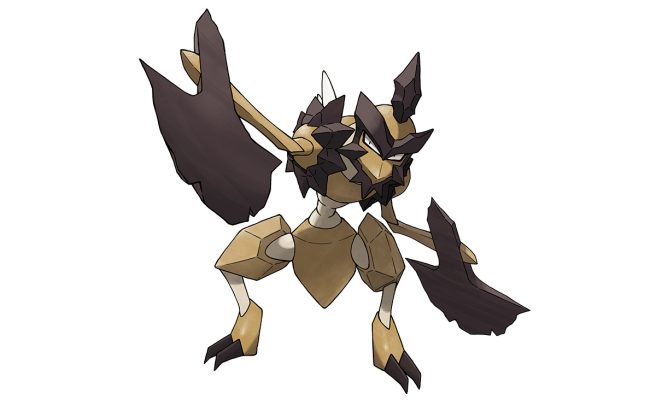 A new trailer for Pokemon Legends: Arceus has just gone live, and it’s introduced us to a new creature known as Kleavor.

Kleavor is a Bug/Rock Pokemon, coming in at 5’11” and weighing 196.2 pounds. It’s able to evolve from Scyther due to special minerals located in Hisui. Parts of the creature’s body have hardened into stone, and these stone parts can chip during battle.

In Pokemon Legends: Arceus, players will see that Kleavor can use its axe-like arms to deal massive damage. It uses its arms to carve symbols into tree trunks and chop trees down to mark its territory.

Today’s video shows a bunch of other elements for Pokemon Legends: Arceus as well. We’re able to get a look at the Arc Phone, alpha Pokemon, Celestica Flute for riding Pokemon, and facilities of your home base, Jubilife Village, which includes the clothier and hairdresser, photography studio, general store and craftworks, and the pastures.

Our last look at Pokemon Legends: Arceus was about a month ago when a video for the game was published, and it was our first look at the title since its reveal. We were also introduced to Wyrdeer, Basculin, Hisuian Braviary, and Hisuian Growlithe.