Posted on June 20, 2020 by Campbell(@CampbellSGill) in Reviews, Switch 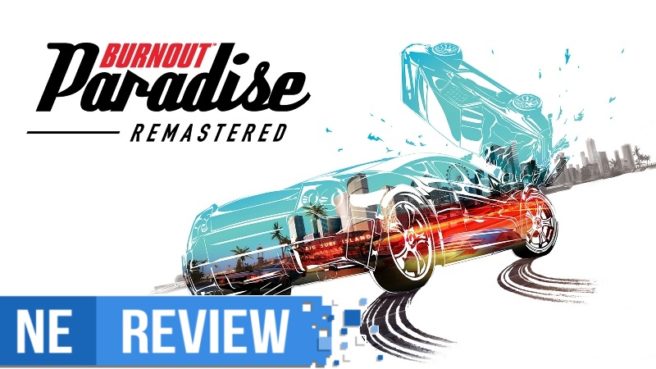 Early on, Burnout Paradise Remastered tells you that this game will be “unlike any driving experience you’ve ever had.” Although many people already have experienced this exact same driving adventure in the years since its original release on last-gen consoles in 2008, it is nonetheless just as fun as ever. This remaster promises to bundle all of that version’s extra content and DLC into one polished package that features improved visuals and performance, and after releasing on other platforms a few years back, it’s finally made it to Switch. The release on Nintendo’s console might have a few drawbacks of its own, but it preserves all the simple joy of the original game with pristine performance in portable and docked play.

Burnout Paradise Remastered is an arcade experience through and through. It’s an open world racer with few overarching objectives – you’re free to explore the streets of Paradise City however you like, zooming at high speeds and gleefully breaking traffic laws and wreaking havoc as you go. There is little by way of an overarching goal, except completing missions across the city to get marks on your license. With every race, time trial, or combo challenge you complete, the more your license rank improves, and the higher you rank, the more cars get added to your garage. 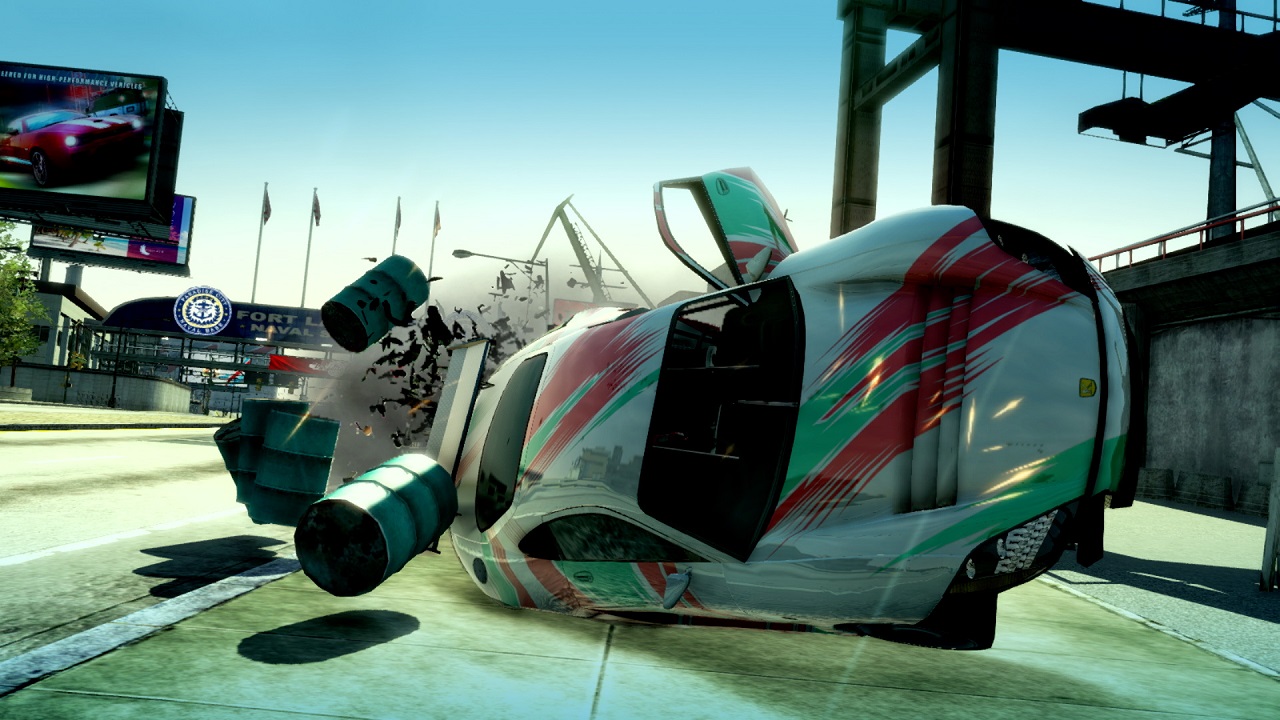 It’s a simple progression scheme, but a highly effective one. It’s extremely addictive to just race around the world and discover all that it has to offer. The game rewards flashy or daring driving by filling up your boost meter, which can make you go even faster for short periods of time and can make all the difference in a neck-and-neck race. If you just barely miss an oncoming car, or drive in the opposite lane for an extended period of time, or cause extensive damage to roadside property, you can increase your boost meter. This mechanic encourages you to make the most of Burnout Paradise’s smooth and responsive controls to make the most daring and bold moves that you can.

There’s lots to do in Paradise City beyond the main license rank challenges. There are viewpoints to discover, hidden routes to race through, and billboards and fences to smash in. And there are very few penalties for mistakes as well: if you get into a massive crash (as is extremely easy to do when you’re flooring it and driving into oncoming traffic), you simply respawn at a nearby site a few seconds later without a scratch. This means you can zip across the streets with reckless abandon and have little fear of negative consequences, making for a blissfully freeing arcade experience. Burnout Paradise Remastered might not have much overarching structure, but that means that it lets you focus 100% of your attention on chasing its many opportunities for high-speed thrills. 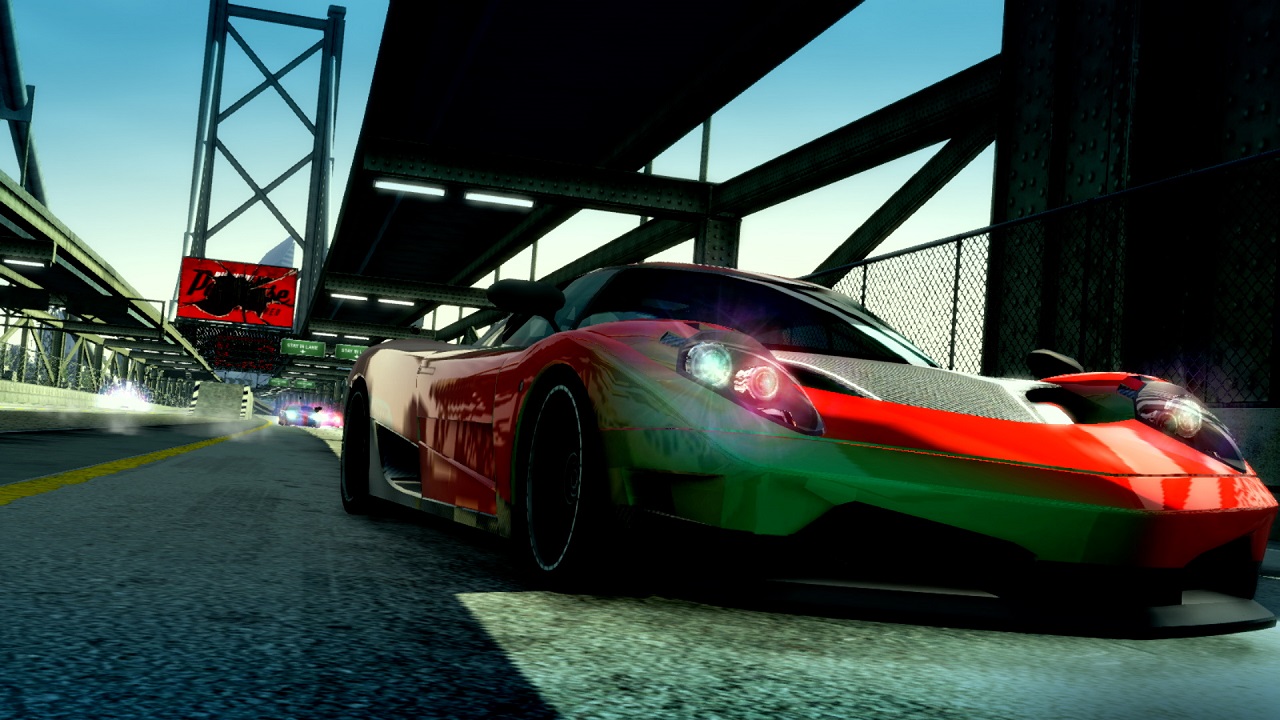 That being said, just as much as the fun of the original game has been preserved in the Switch release, so have its blemishes. Many of its objectives can feel repetitive. You’ll end up racing the same route over and over again if you want to max out your license. Likewise, there is no fast travel option, which is particularly annoying because you can only change your car at specific locations around the map. Paradise City might not be an exceptionally large open world, but it is nonetheless tedious to have to speed from one location to the other when nearly every other game in its genre has adopted fast travel. Such complaints are nitpicking, of course, but this remaster was the perfect opportunity to address them and create a more polished experience all around, so it’s a shame that they weren’t addressed.

Switch owners will be pleased to know that this same arcade delight holds up intact on Nintendo’s console. All the content is there, including the dozens of DLC cars and Big Surf Island, meaning that you have all the Burnout content you could ask for immediately. As is extremely important for any racing game, Burnout Paradise runs at a silky smooth 60 frames per second on Switch. Whether you’re playing docked or handheld, it features the same dependable performance that can enable you to make sharp turns and split-second reactions to road conditions. 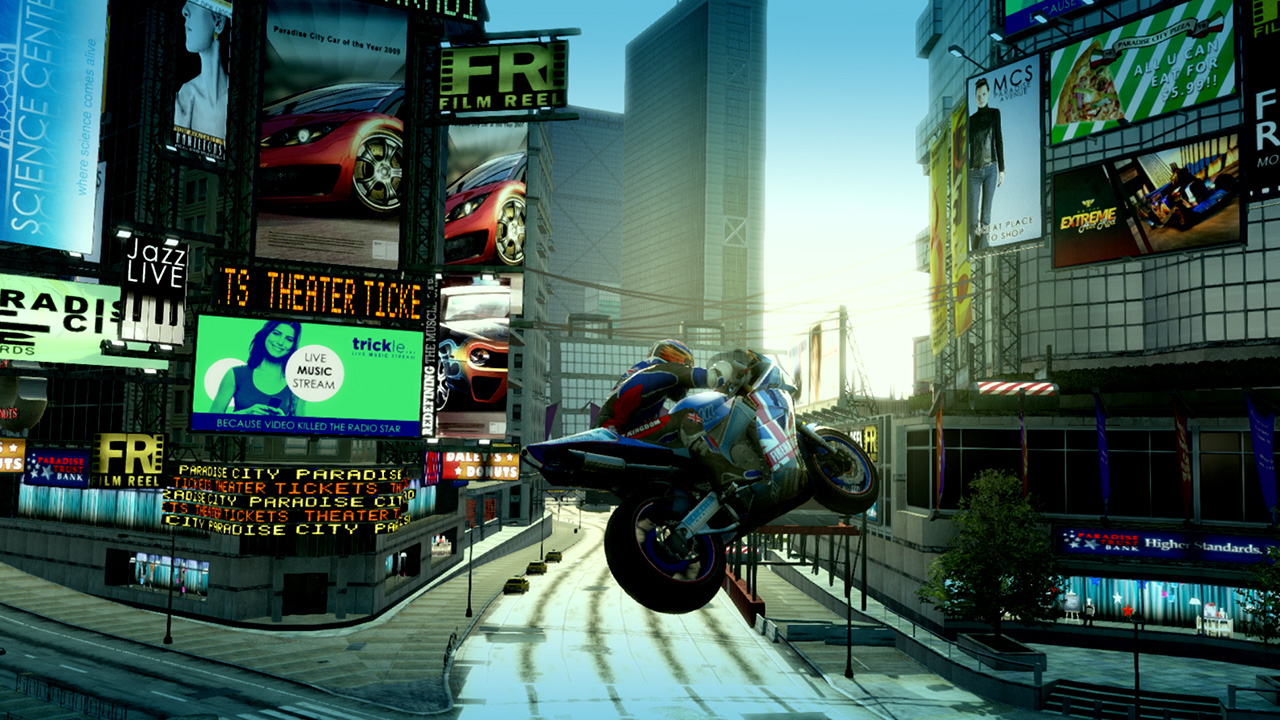 Visually, it looks solid as well. Understandably, it’s lacking in some of the graphical enhancements present on other versions of the game, but it nonetheless looks solid. It looks fairly sharp in TV mode, but handheld mode is a bit blurrier. While many events start out with a striking blurring effect, for example, shadows and outlines simply look pixelated and choppy on the Switch’s handheld screen. The tiny screen also makes it difficult to make out oncoming obstacles when you’re racing around, which is due in part to the small screen size as well as lower resolution.

As appealing as its visuals can be on Switch, the drawbacks in handheld mode bring into question whether the Switch version is worth its significantly higher asking price compared to other versions of the game. It really brings into question how much value the ability to play portably can bring. That being said, if you want an excellent arcade racer that you can play anywhere you want (albeit in a somewhat compromised state), you can’t go wrong here.

With Burnout Paradise Remastered on Switch, you get one of the finest arcade open world racers ever made, running at a beautiful performance and with the ability to play wherever you want. It’s a brilliant game that has enjoyed a relatively smooth transition to Switch, although the handful of technical blemishes, along with the continued presence of longstanding issues with the original game, raise the question of whether it’s worth the high asking price compared to the other versions. But at the end of the day, if you’re willing to pay the price for a portable version of some of the best racing thrills ever created, Burnout Paradise Remastered is an easy recommendation.