Posted on November 4, 2018 by Dennis(@LyonHart_) in Reviews, Switch 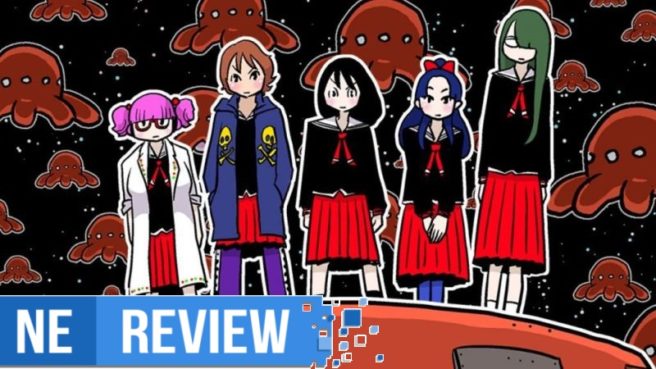 Music is prominent in our day to day lives because of the amount of emotions it can give us. Whether it’s sadness, happiness, anger – it can illicit memories and induce feelings, creating moments that stay with you for the rest of time and take you out of the moment and into another space. For musicians, this is a lifestyle, not just a hobby, and the wonderful thing about games like Guitar Hero, Rock Band, and Dance Dance Revolution is that they make feeling like a musician – regardless of whether you have talent or an affinity for instruments and the craft – a lot more accessible to the masses by handing them peripherals to make the immersion that much more real. With Gal Metal, no peripherals are needed, as your life as a drummer begins as soon as you pick up your Joy-Con and start tapping away with the motion, hitting at imaginary drums as you try to save the world from an alien invasion with the power of metal. It’s a lot of fun when it feels good, however the accuracy, timing, and calibration more often than not are off-tempo, even if you’re not, making it for an imaginative but somewhat lackluster experience.

Gal Metal has a unique presentation, because at its surface it just seems like a rhythm game, but there’s much more going on than what it leads on. I was rather surprised to find that it took some time before I played my first song, and then the one following that, as in between the story itself is presented in a visual novel format, which eventually turns into a management sim. The story is laid out in a manga-like format, reading right to left, with panels representing each line of dialogue and action performed, with some slight animation in between to bring it to life a little more. More often than not each chapter and episode will consist of the band attending a typical day of school, talking in between classes wondering what they need to do to defeat the aliens, and then texting each other while in class to further plot their victory. After the school segments are over, you can jam out with your bandmates, or you can accomplish other errands and activities that’ll help increase certain stats for your band – like more combo abilities, less of a chance to be stunned, etc. – and increase the bond between your bandmates as well for more story content between each band member. 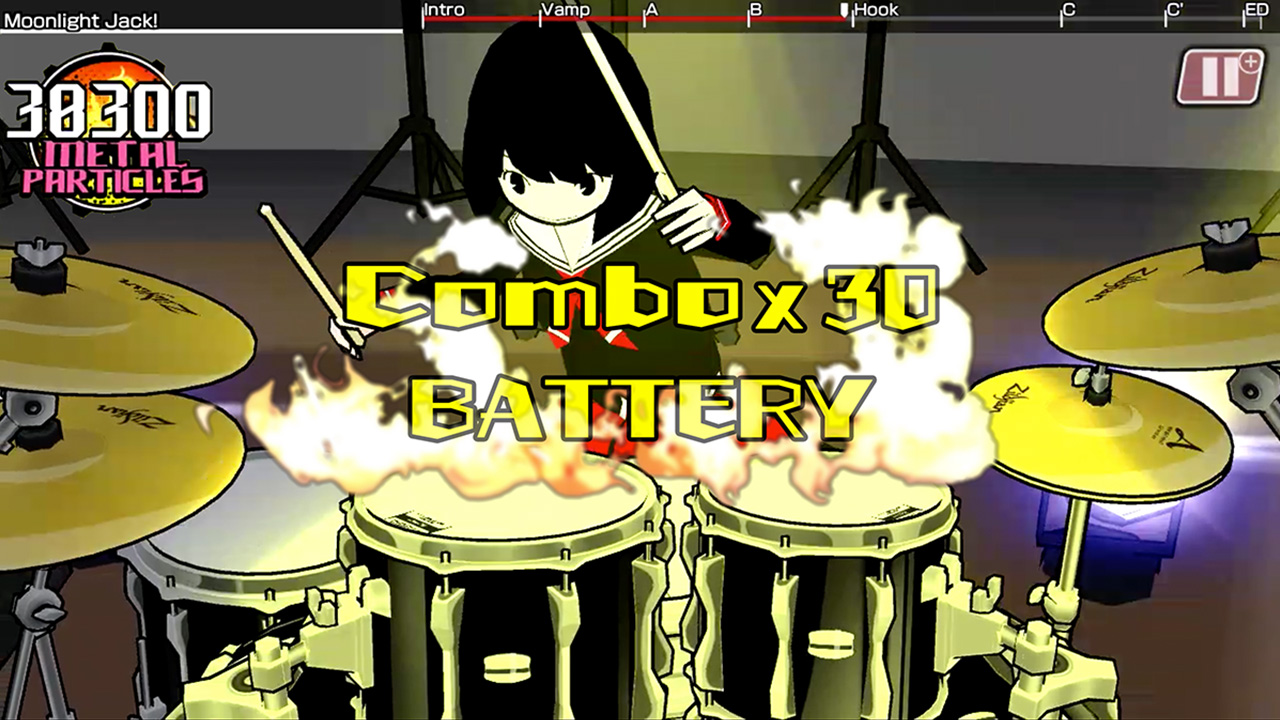 Each member of Gal Metal doesn’t really stick out due to their cliché types such as the nerdy member, shy member, rebellious member, and so on, but the cute art style and dialogue does make for a somewhat charming interaction between them all as you progress through, even if it is kind of the same thing whenever you’re going through the story segments. While going out to do activities and errands after school, you can choose between a variety of things to do like go to the theater, shopping, library, and others, but unfortunately you don’t get much out of it other than a stat boost depending on the activity chosen. Sometimes if other members are at the same location you’re at, you can get additional story content, but a lot of the time it’s just a quick little animation of them jumping around and not much more beyond that. Maybe I’m asking too much to have walked around a small hub at the very least – similar to Splatoon – but the menus and management are lackluster and truthfully don’t even feel all that important to the story or your chance of success. After going through only the handful of tracks the story has to offer, all you’re really required to do is make sure you’re able to create a tempo that’s in sync with the rest of your band, and switching between rhythms to ensure combos and your chance at defeating the aliens, which is just a glorified high score to beat.

As much as I wanted to enjoy Gal Metal (and I definitely felt like I was rocking out at some points, so credit where credit is due), I felt myself becoming more frustrated with it because of its constant push to want to use motion controls, though thankfully it does offer two other options: touch and button. These were a lot more suitable since they were more accurate, yet I found it very interesting that you could also go more in depth with the drums this way as well. With motion, you just swing your Joy-Con and depending on the side you’re swinging, you’ll either initiate a kick drum or a snare. Swing both simultaneously and you can hit crashes as well. It’s a three step way of playing that’s easy to pick up and definitely fun to do, but the sensitivity is sometimes either too great or too small, and it’s difficult to calibrate it just right to simulate an actual drumstick. 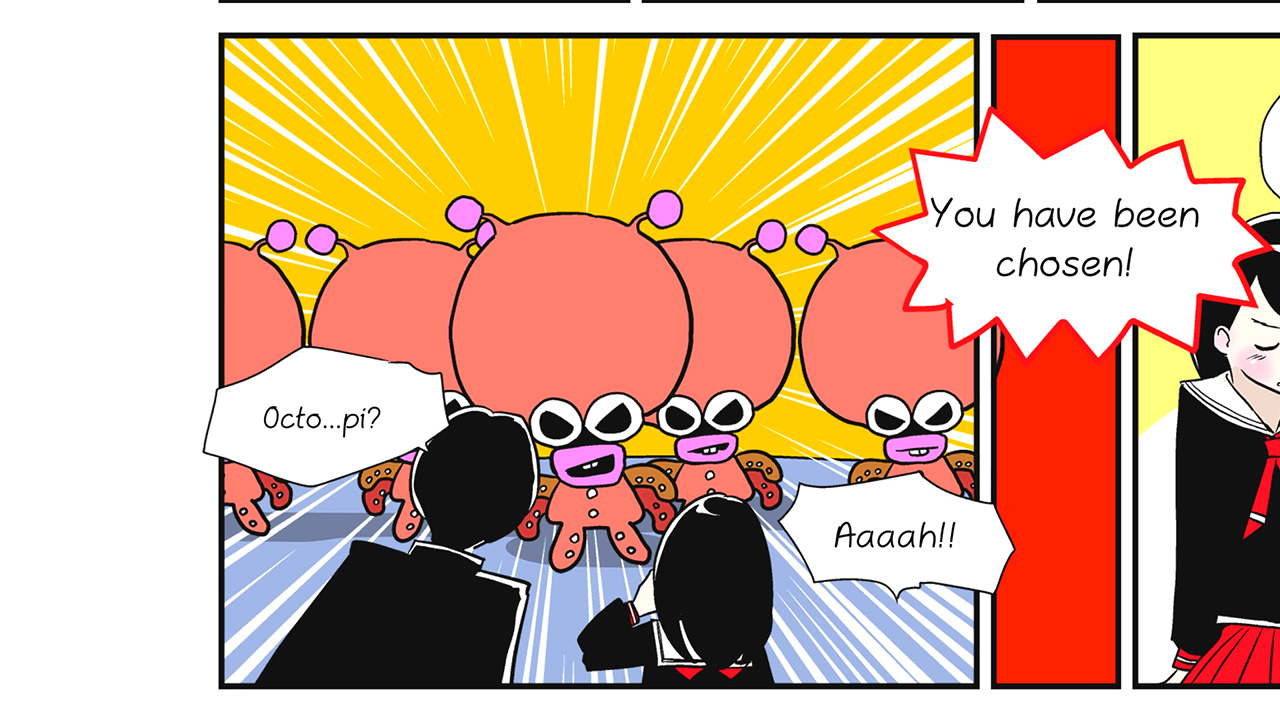 The buttons work well due to a physical presence, but the only issue with button mode was that with so many parts of a drum set – snares, hi-hats, toms, and cymbals – it’s hard to keep up with all the button placements, and the layout isn’t exactly intuitive either. With touch, however, you can visually see slightly transparent icons of each part of the drum set, and a simple tap will trigger the sound. Though I would have preferred to play with either motion or button, surprisingly the touch method ended up working the best and actually made our songs not sound like a cacophonous demolition derby. Regardless of mode you choose, when playing in handheld mode, the touchscreen is active on the Switch, and you can progress the story as well as play all modes this way as well. The entire game can be played without the need for Joy-Con or buttons and is perfectly suited for tablet-only.

Overall, Gal Metal has all the right ideas and qualities for an accessible, charming, and fun rhythm game that has the potential to be rather popular within a niche but passionate Switch audience. However, the lack of modes, repetitive episodes, uninspired graphics, and a pointless management portion make for a sub-par package that may need a few more years of practice before it’s ready to hit the big stage.

Gal Metal is definitely a unique title that makes use of the motion controls with the Joy-Con and makes you feel like a drummer. Unfortunately, the motion controls could use some improvement, and regardless if you yourself are a musician or a rhythm-genre expert, you’ll end up finding yourself wondering if you’re drunk as you sloppily save the world with out of tune and out of tempo drum beats, but thankfully the ability to change controls to button and touch can alleviate some of the issues. At the end of the day, Gal Metal is arguably a concept that still needs to be polished out, as the idea behind it is great, and the depth of band management and increasing skills allow for more than just drumming as its gimmick, making it a more thoughtful experience, but the songs are short and have little room for error, giving a sense of rushing to make the best rhythm you can for your band mates to jam out to, only to be disappointed by the unresponsiveness of it all before you find yourself reliving a scene from Mars Attacks!

Gal Metal review copy provided by XSEED/Marvelous for the purposes of this review.