Posted on November 15, 2017 by Dennis(@LyonHart_) in Reviews, Switch, Switch eShop 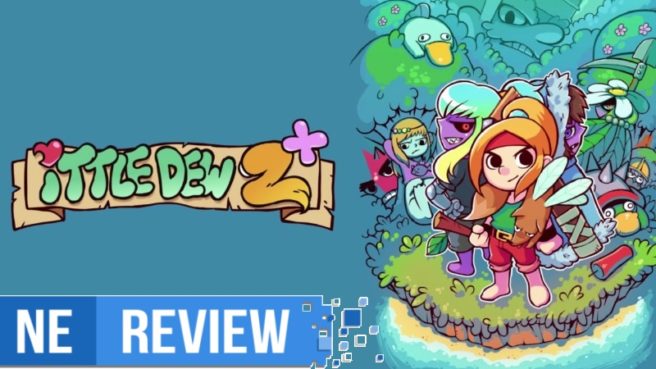 Years after Ludosity’s well-received Ittle Dew back in 2013 on Steam before making its way to consoles about a year later, Ittle Dew 2+ is here and makes its way over to the Switch, offering fans of top-down dungeon crawlers and old-school Zelda players something to look forward to, and a sequel that finds itself just as wildly charming and humorous as it was the first time around. The game brings with it some new treats that make it feel like a fresh, albeit familiar, new adventure for our protagonists Ittle Dew and Tippsie.

Ittle and Tippsie find themselves unfortunately (or fortunately, depending on how you look at it, as they love the loot) crashing into yet another island where they must explore and adventure throughout dungeons and meet mysterious creatures along the way to aid them in finding raft pieces so they can leave the island and be on their way to probably crash into another island in the future. The story here is immensely simple, as is the gameplay that accompanies it, but what makes it so worthwhile is that the whole vibe of the entire game from the addicting, fun, yet relaxing soundtrack, to the humorous dialogue, unique portions of the map, and absurd characters you meet along the way offer an experience that feels wholesome and memorable. It almost presents itself like a wild cartoon from beginning to end that finds itself enjoyable by all ages. The art direction is similar to the first Ittle Dew, but goes for a more 3D look this time around. In a lot of ways it makes it distinct from the first and from other games in general, but in an odd way makes it feel a lot less inspired compared to its predecessor. 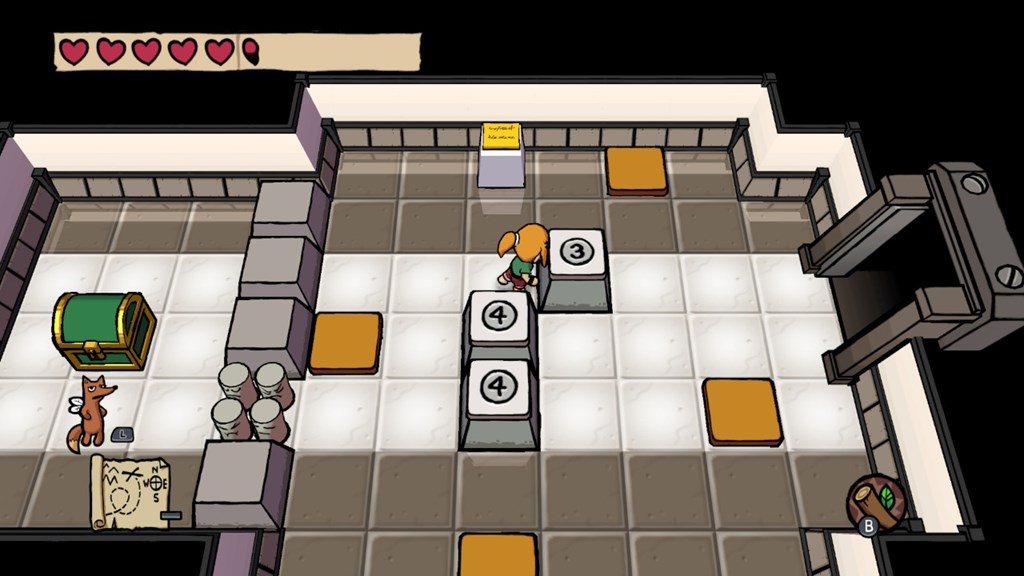 After a brief cut-scene and an exchange of words with an NPC, you’re basically free to explore as you please. The map does well to let you know where you should go, but doesn’t penalize you for going in the opposite direction or checking out some other towns or dungeons in the interim. If anything, in a subtle way, it does encourage the player to do so, as you’ll also find a bunch of hidden stuff scattered throughout the island, some useful, some not so much. Some items won’t make sense to you right away while they’ll hold significant value later down the road, either serving as an imperative part of a quest, or something needed to complete a puzzle that may not be immediately accessible to you. The sense of curiosity and exploration is definitely rewarded in good fashion, and give players more to do besides go straight to dungeons – which is totally fine if that’s something you want to do.

As you traverse the island, you’ll run into a multitude of enemies from really angry turtles, evil statues, floating eyes, demented vegetation and so much more. The enemy variety, while not the biggest, is varied enough and spread out in a way to let players know where they’re also located, as some enemies will belong in certain places over others, such as the Star Forest, Desert, and more. There isn’t any type of traditional experience system in Ittle Dew 2+, so players will have to use their best judgement when it comes to which enemies or bosses they can take on right away with the equipment at their disposal. Most boss fights and enemies have a set pattern that you grow accustomed to after a while, so it’s nothing to truly fear, and there’s enough time and clever enough animations to dictate what the enemy will do next, giving the player enough time to dodge should they choose.

Ittle Dew 2+ has you start out with five hearts and goes down in a forgivable manner as you get hit, and while you could easily go through the whole game this way, you can find boxes of crayons scattered throughout that will add a quarter of a heart to your overall health. You can get up to an additional five hearts for a total of ten hearts, making for a higher chance at surviving fights or reasonable risk-taking when you want to just hack-and-slash away at a boss when they’re so close to dying without having to constantly dodge and run around a room, should the environment allow you to do so (for example, some enemies and bosses have a massive knockback attack, and a good amount of dungeons have sections that have small tiles for you to go across or fight on or else you’ll find yourself constantly falling down and having to start the room/puzzle/fight all over again). 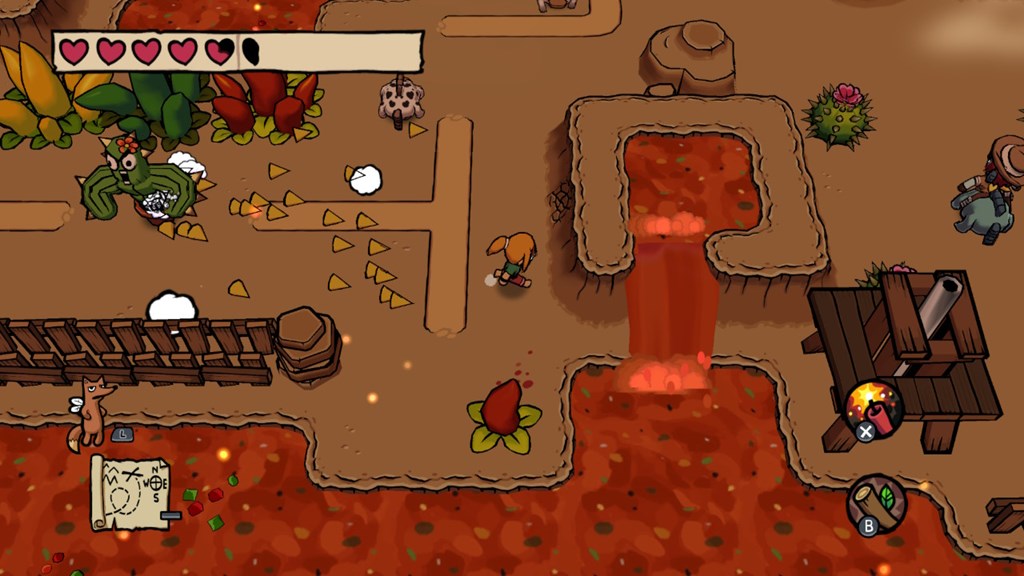 The only real issue with Ittle Dew 2+ is that beyond dungeons and exploring, albeit rewarding, it doesn’t offer much besides that. It’s a great little title if you’re looking to pick up and play for a few minutes at a time, or simply want a puzzle-based dungeon crawler, but outside of this there aren’t many quests or worthwhile moments that get you side-tracked before you realize hours have passed by without you noticing but still having fun in the process. It’s very much a dungeon-to-dungeon straightforward progression, even with a nice, vibrant island to roam around in. Outside of chests and the occasional village and characters you’ll meet along the way – which more often than not will have a text bubble pop up automatically versus a traditional A-button prompt to initiate the conversation – there’s not much Ittle Dew 2+ offers beyond this. It’s very much a one-and-done experience, but can still be enjoyed by completionists that want to go back and maybe find other artifacts or complete optional dungeons that they may not have tackled the first time around. These optional dungeons can be found via scrolls, which then mark and unlock them on your map. Some are puzzle-based, others are very enemy-centric, but ultimately none of these provide too massive a challenge, but remains accessible for all ages and still fun to do – which, of course, is the most important part.

The soundtrack for Ittle Dew 2+ is probably one of the most complementary parts of the game, if not – the – most, as it provides a varied but consistent theme throughout, and in different tempos, recapitulated to fit caves, open areas, marine areas, forest areas, etc., to give each a distinct feeling and in a way that soothes your ears as you play through but also keeps you aware of your surroundings and, if applicable, imminent danger or fun surprises. Think of how if Mario is running through a beach with a certain theme playing for that world, then he proceeds to go underwater and, while the music continues to play, the instruments are changed to something a little more simplistic and float-y, like a xylophone on top of soft pads harmonizing with a harp and a bass. 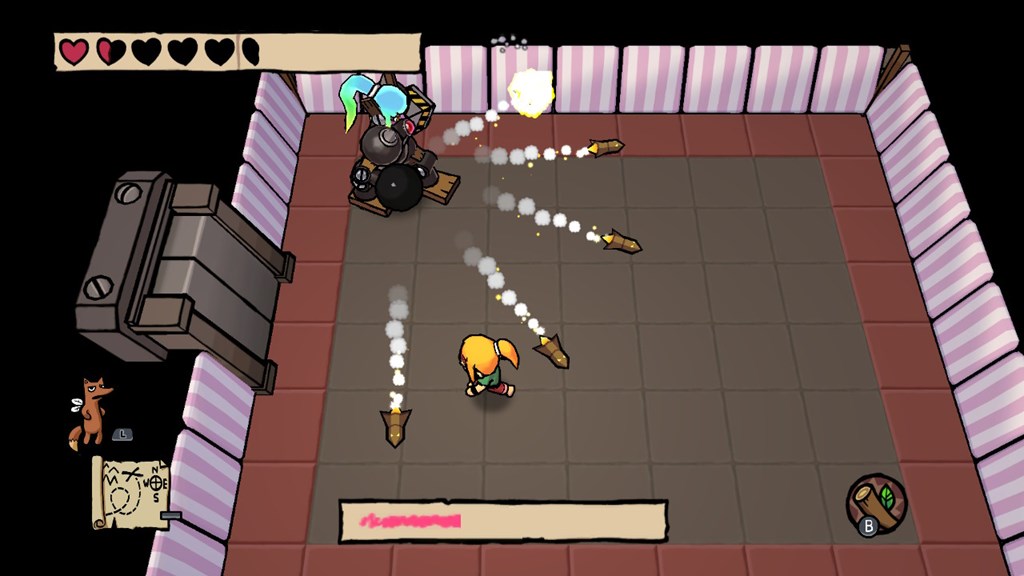 While Ittle Dew 2+ doesn’t do much in terms of replay value and keeping players hooked for large periods of time, it’s a fantastic game to play as a “secondary title” – something that’s an easy to jump into pick-me-up that provides charm and simplistic but fun gameplay during those times you want to play something different for a bit but don’t want to invest too much time into. It’s not something I would recommend as a “this is the next game I’m going to play and I won’t play anything else until I beat it!” type of game, but, again, it’s a great addition to the Switch library that’s memorable and gives players something to play for bits and pieces at a time, as I feel that’s the best way to enjoy this to prolong your time with the game as well as getting the most out of it, otherwise this is a title you could probably blaze through in about 4 hours if you’re just getting through dungeons and don’t care much about enjoying the world you’re in.

Ittle Dew 2+ is a short but sweet RPG that would do well in any Switch owner’s library looking for something a little more old-school while retaining a modern feel in mechanics and presentation, which does grow on you if you’re initially thrown off by the seemingly low-budget Cartoon Network-style approach, compared to its more 2D, hand-drawn predecessor, for better or for worse. The soundtrack is upbeat enough to keep you in high spirits, but relaxing enough to keep you focused as you make you adventure alongside Ittle Dew and Tippsie as you find pieces of raft and experience the charm along the way. The game is very much a core believer of making it about the journey rather than the destination, as the story is really meant to give you a goal to achieve rather than something to find yourself invested into emotionally. Though the controls can feel a little slippery, Ittle Dew 2+ feels good to play and mess around in, and the island has just enough stuff in it from section to section to keep you wanting to do more and never truly feels like a grind, which is nice for a tightly-packed, straightforward title like this. Puzzle and dungeon enthusiasts have a great game here to enjoy, but it’s a title that’s more so meant for short bursts rather than binging on – otherwise there won’t be too much to squeeze out and truly find yourself enamored with.

Ittle Dew 2+ review copy provided by Nicalis for the purposes of this review.