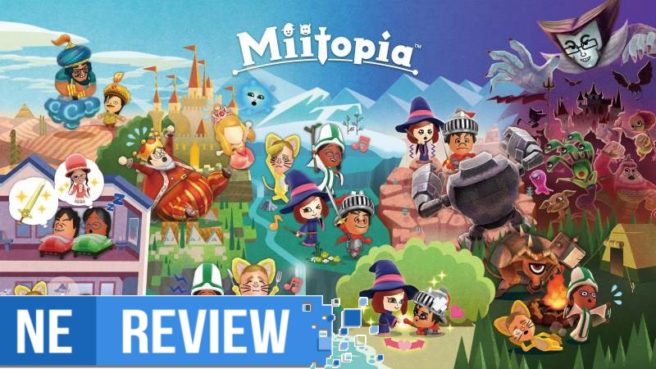 Miis have seen a long history of games and appearances ranging from party titles like Wii Play and Wii Sports to spinoff Mario titles such as Mario Kart and Mario Tennis. Now from a fancy island resort in 2013’s quirky Tomodachi Life to the fantasy wonderlands of an RPG, Miitopia sees Nintendo’s Mii avatars come front and center once again on the 3DS. Miitopia builds ground and gives Miis a more robust experience compared to the simulator nature of Tomodachi Life, but it falls short in many areas to really make this a game worth owning, even if it is just as fun and absurd as one would expect from a Mii driven title – for better or for worse.

Miitopia has players joining a fantasy world inhabited by Miis – imported, user-created, and random. Right at the beginning, the characters get taken over by an evil Dark Lord that steals everyone’s faces and renders them speechless. It’s up to a band of heroes to take back the faces that have been stolen by defeating enemies that have possessed them, getting revenge on the Dark Lord, and bringing peace back to Miitopia.

Along the way you’ll run into various towns and small hubs in which you can walk around and have extremely short conversations with people (if they have their face). However, most of your time is going to be spent not actually controlling anything, as Miitopia has its world set up in Super Mario Bros.-styled segmented levels. Once these areas are entered, the game becomes an auto-scroller where you’ll intermittently run into enemies. 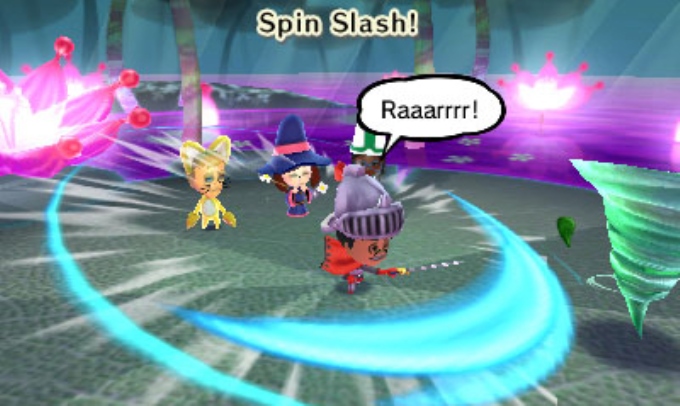 Miitopia’s battle system is about what you’d expect, but works well and has its own flair thanks to the personality of Miis shining through and sometimes helping each other out between turns. You’ll choose between a few classes like Mage, Warrior, Chef, Priest, Thief, and Idol before eventually getting a couple of more classes later in the game as well. Each class comes with its own perks and special attributes, as they usually do, and help the overall composition of your team. Depending on how you’ve set it up, and truthfully no matter how you set it up, chances are you have a team that’ll just about survive anything as the game does a lot of hand-holding and, in times of need, will automatically heal and create passive buffs in your favor to make sure you’re able to win the battle. The player is also only able to make decisions for their own character, while the other party members automatically fight. Personally it’s not something I prefer, but thankfully most of the moves they make tend to make sense and don’t seem entirely wasteful. It’s a straightforward battle system that gets the job done in the long run, and while it’s fun to see the Miis interact with each other as they battle and help each other out, the repetitive nature of it all makes it lose its spark rather quickly, and the game feels like a chore sometimes to continue for longer play sessions.

Due to the structure of the game, Miitopia is meant to be taken mostly in short bursts rather than long periods of time. After every two to four levels – which don’t take long to begin with – you reach an inn at the very end. You can heal back up, feed your Miis, grab new clothes, and do things reminiscent of Tomodachi Life. The game will also ask you if you want to stop where you’re at or continue playing. The frequency at which this occurs can surely get annoying for some players. It also contributes to the feeling that Miitopia isn’t intended to be a full-blown RPG experience. 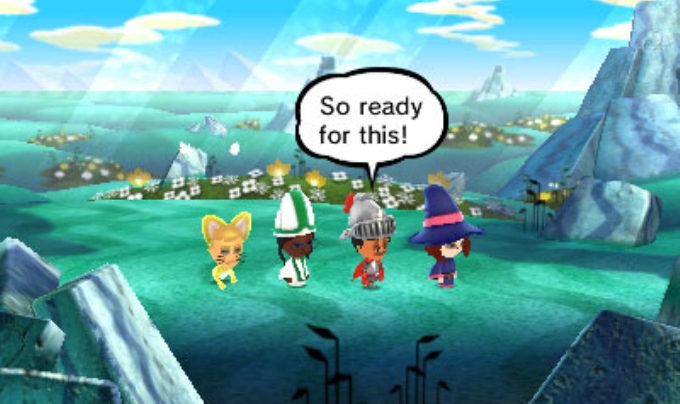 You can scan amiibo for added bonuses in Miitopia, which is neat, but I’ve noticed most of the ones I tried happened to just simply give Game Tickets. These are little tokens you can get throughout the game in which, while at an inn, can be used to spin a wheel and obtain prizes or play a computer in Rock, Paper, Scissors for the potential to earn money. It’s a nice bonus that came in handy since I was able to gather money very quickly from it all and make it easier to buy new weapons and armor for my Miis.

While most amiibo provide Game Tickets, some of the more obvious ones like Mario, Samus, and the Inklings will give you pieces of their clothing to wear in Miitopia. What’s nice is that even if you’re wearing a piece of armor you may not like the appearance of but is rather powerful, you can easily change its look to another acquired item you have without losing its stats and perks. It’s a great feature as myself (a Mage) my friend (a Warrior), The Joker (a Thief), and Heisenberg (a Chef), ended up turning into Peach, Luigi, Samus, and Callie respectively as we continued on our journey to take back everyone’s face from the Dark Lord Jackie Chan.

Ultimately, it’s possible that looking at Miitopia as an actual RPG instead of a Mii game is the wrong way to take it, but when it’s being sold as a full-priced title, then it will be perceived as such. It’s odd because while Miitopia does have a ton of fun and humor built into it, it’s difficult to completely recommend. Usually fun and recommendations go hand-in-hand, but Miitopia is the anomaly in which it simply doesn’t. It’s missing the charm and engagement that previous Mii-focused titles have that makes it exciting to see you, your friends, and other creations come to life and interact with each other in a goofy way, and while Miitopia certainly has the same excitement of going on an adventure with your friends and having the ability to switch out and recast virtually anyone in the game at any time, the lack of real inspiration to the overall experience hinders it from becoming truly enjoyable, and feels like a shallow and banal attempt at making another hit like Tomodachi Life was. The concept of Miitopia is great, but the execution of it all leaves much to be desired. 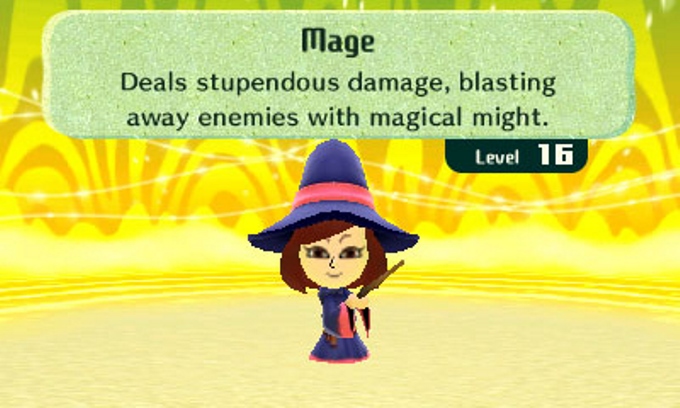 Tomodachi Life was refreshing while being equally as hilarious, and even as someone who doesn’t really enjoy the sim genre, it was a joy to play and consumed me for a solid two to three months. However, Miitopia takes on a genre that’s been utilized in every which way, takes the most basic functions of it, and throws Miis in there with no real added value. Despite being fun, it’s hard to fully recommend picking Miitopia up, as weird as that may sound. There’s not much going on thanks to its auto-scrolling and ability to auto-battle on top of that, and with each level being completed in a matter of seconds – no longer than two minutes – it even feels like it’s meant for mobile more than anything else.

While Miitopia further proves that Miis have always been a nice addition to Nintendo consoles since their debut on Wii and are sure to ensue hilarity, Miitopia falls short of being a technically good game thanks to its repetitive nature, hand-holding, and almost too simple approach at the RPG genre. The ability to go on an adventure with virtually anyone and anything in Mii form is great, not to mention the journey is humorous and enjoyable. But because of its overwhelming simplicity, it’s hard to recommend the game at all. Miitopia simply doesn’t have the charm or magic that Tomodachi Life and a few other Mii-related games before it have had, and is ultimately just an empty adventure with slapstick humor. It’s not a bad game by any means, but it’s also far from being a must-have title.

Miitopia review copy provided by Nintendo for the purposes of this review.