Posted on June 20, 2019 by Campbell(@CampbellSGill) in Reviews, Switch eShop 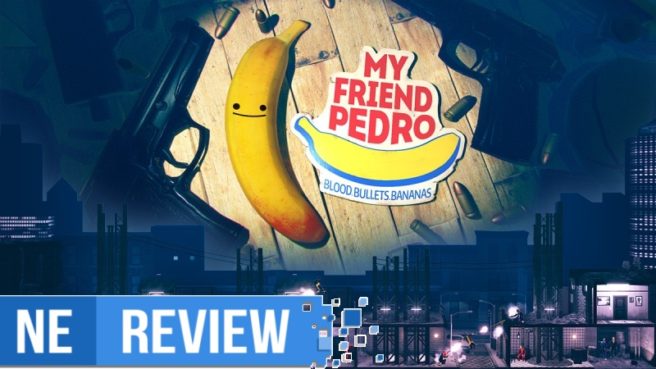 Let me begin with a full disclosure: I have never used hallucinogenic drugs in my life, and after playing My Friend Pedro, I don’t think I’ll ever need to. It’s a game where you can take commands from a talking banana, explore the inner psyche of said banana, and slow down time to gun down your enemies with all the grace of a ballet dancer. This latest release from darling indie publisher Devolver Digital is unabashedly weird, violent, and, in its own strange way, beautiful. The experience may be over far too soon, but this potassium-packed shoot’em up still manages to create a truly appealing experience.

It all begins with a banana. Our mute, nameless main character has been knocked into a coma, and the first thing he sees upon waking up is his friend, Pedro: a floating, talking banana. Pedro soon informs our hero that he’s been captured by a local mobster, and it’s up to him to take down every gangster in his path to escape. After Pedro presents a brief tutorial on how to exterminate his foes with the utmost style and grace, our character is set loose on a banana – and blood-filled – adventure that will take him from the soggiest sewers to the heart of the internet itself.

If it hasn’t already been made abundantly clear, the plot is nothing short of ridiculous. Pedro himself contributes to this with his abundant witticisms about violence in video games, censorship, politics, ballet, internet troll culture, and so much more. However, Pedro’s remarks don’t always feel as memorable as they could have been. The premise of the narrative is so wonderfully bizarre that it sometimes feels as if the game doesn’t take full advantage of it. It can feel a bit restrained – Pedro’s commentary on gamer culture can be funny, but it’s nothing that you haven’t already seen before. It would have been nice if his bizarre nature could have been exploited for some more out-of-the-box dialogue. 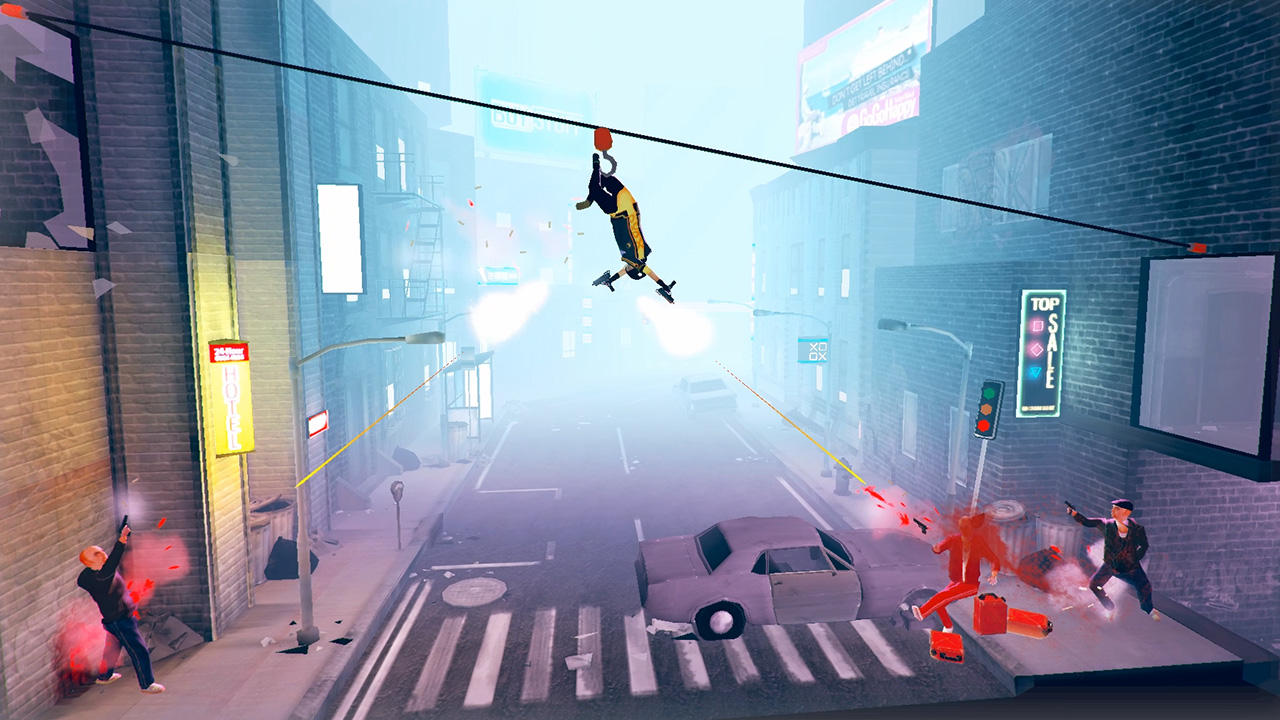 That said, the narrative still manages to be surprisingly engaging for a story about a floating banana. There’s plenty of mystery in the game: who is our main character? What is his past? Why is he chased down by bounty hunters at every step? Most importantly, why does he have a floating banana following him around? Appropriately enough, all but the last of these questions are addressed throughout the story, and I soon found myself invested in solving these mysteries. All told, the story could be described as being absolutely “bananas” – but then again, such a pun would be low-hanging fruit.

But when you can look past the novelty of a game being focused on a sentient banana, you’ll be greeted with a hectic hybrid of genres. My Friend Pedro is primarily a side-scrolling shoot’em up, but it also features significant elements of high-speed platforming and puzzle solving. As should be expected from the premise, the gameplay strictly adheres to realism – after all, it lets you bounce off walls, snipe foes mid-air, and pirouette like a ballet dancer to dodge bullets and keep up a breakneck pace. To make this intense gameplay possible, you’re able to “focus” and slow down time for brief periods with a click of the left stick. Perhaps it’s just me, but clicking a stick rarely feels as intuitive as pressing a button, so I often found myself missing this ability. Thankfully, there is the option to fully remap the controls to a different scheme.

Our hero is equipped with a plethora of firearms. This wide array of weapons ranges from simple handguns to sniper rifles to machine guns. Sure, you can use these firearms to shoot down your foes like a normal criminal, but that won’t satisfy Pedro. Instead, the game offers you a multitude of ways to use these weapons to kill your opponents with impressive creativity. For instance, you may kick a frying pan into the air and shoot at it for your bullets to ricochet onto your opponents. You can also use hanging metal signs for the same purpose, or you can kick the bloody remains of your enemies onto your other foes to stun them. There’s gas cans to use as rockets, zip lines to transport you from building to building, and many other techniques to utilize. 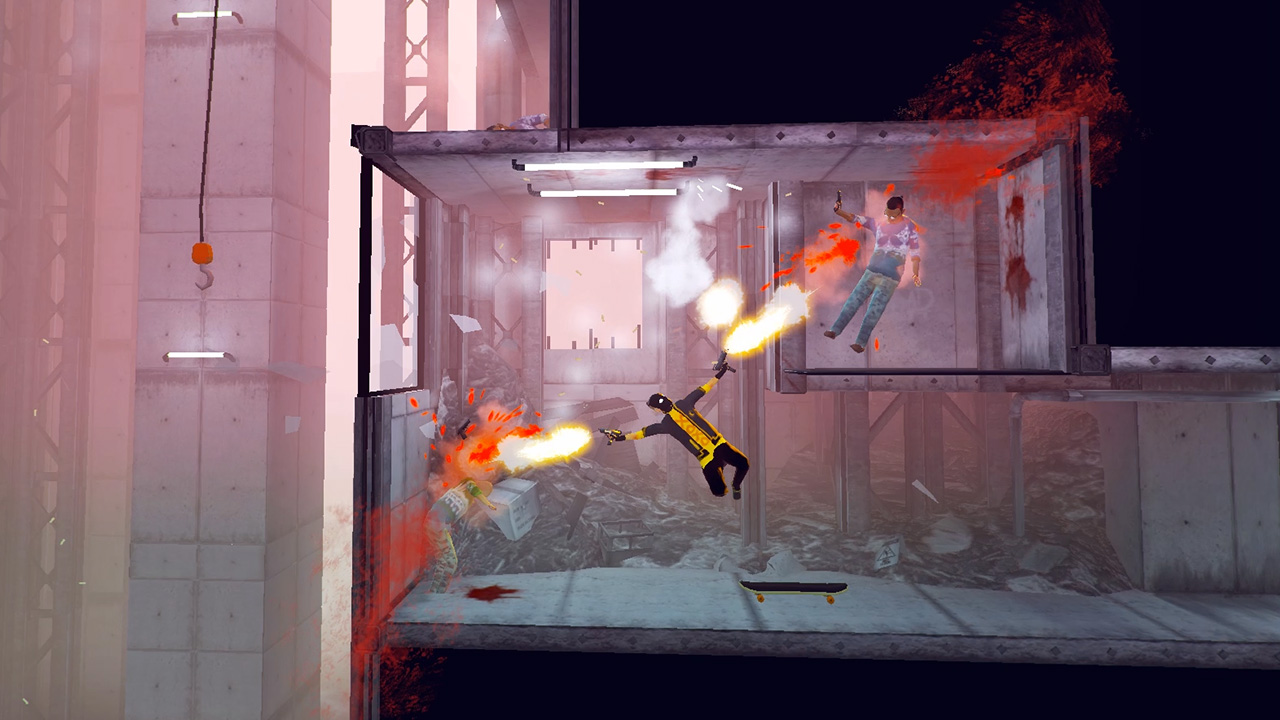 This variety makes every room into a miniature puzzle. Every stage introduces its own unique ideas. The game may focus on speed, but you shouldn’t rush into every level with your guns blazing; instead, each level will task you with using its gimmicks in new ways, and it’s always best to take stock of these traits to use them to your advantage.  Some stages focus on stealth, while others pit you against especially strong enemies; some focus on skateboarding, others feature high-speed roadway brawling.

This abundance of new ideas keeps the game interesting throughout its entire campaign. My Friend Pedro introduces new ways to wreak graceful havoc at a breakneck pace, making for a ludicrous action experience that’s gripping from beginning to end. At its height, the action can feel like it’s ripped out of the most ridiculous action movies and shot up with a healthy serving of drugs. They can be a delightfully absurd and brutal sight to behold.

However, it can’t maintain this insane speed for too long. With each of the forty stages each taking only between two and five minutes to complete, the game can be finished within about five hours. There’s something to be said for a game that doesn’t last longer than it needs to be; however, some of the most exciting levels and ideas only show up within the last few levels, and the game ends before these ideas can be fully fleshed out. This leaves the game’s conclusion feeling as if it ends as soon as it really gets started. 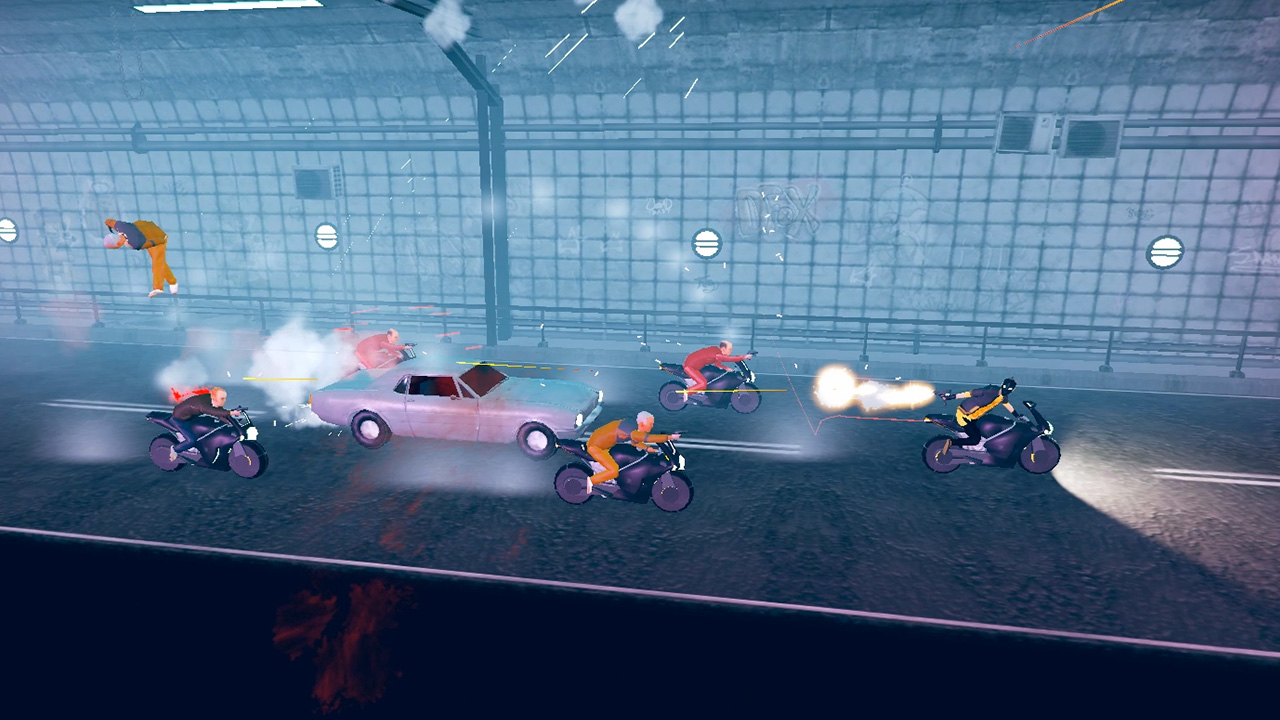 Despite its brevity, My Friend Pedro can be fiendishly addictive. It’s a prime example of a game that’s easy to learn while being hard to master. It isn’t excessively challenging if you’re just trying to finish every level, but if you’re trying to achieve the highest rank, then you’ll have your work cut out for you. With online leaderboards and a rating system for every level, it’s easy to replay each level again and again in search of a higher score. Although the campaign may not be incredibly lengthy, you can easily get many more hours out of the game by climbing to the top position on the leaderboards.

The game’s presentation is generally solid. Its 3D character models are fairly low-detail and don’t look particularly clean when viewed closeup, but from the distance at which they are generally seen in the 2.5D levels, they look fine enough. The environments themselves are solid as well, although many of them feature similar aesthetics; with one notable exception, most of them feature the same color scheme of muted grays, dark blues, or murky browns. The music itself is similarly one-note. It delivers a driving electronic beat, but most tracks blend together with their EDM-style rhythms. Regardless, these songs do compliment their areas well enough. The aesthetics hold up fairly strongly on Switch. The basic visuals look clean on the small handheld screen, but when blown up on a big screen TV, the rough edges and stiff animations are all too apparent. At the very least, performance is solid throughout both modes, letting the action shine through fluidly with nary a dip in framerate in sight.

My Friend Pedro is a surrealistic thrill ride of graceful brutality. Its gameplay is fantastically frenetic and gloriously violent – twirling through the air and taking out half a dozen bad guys at once mid-backflip never gets old throughout the five-hour campaign. Its story manages to remain interesting despite the bizarre premise, even if I wish it were a little longer. However, the visceral speed of its gameplay makes it infinitely replayable in search of the highest score and ranking. Of course, it’s not perfect, with its short campaign length and reserved writing both limiting the overall creativity of the experience. Those faults aside, however, My Friend Pedro carves out a niche for itself, presenting an unpeeled adrenaline rush that’s unlike anything else on the eShop now.

My Friend Pedro review copy provided by Devolver Digital for the purposes of this review.