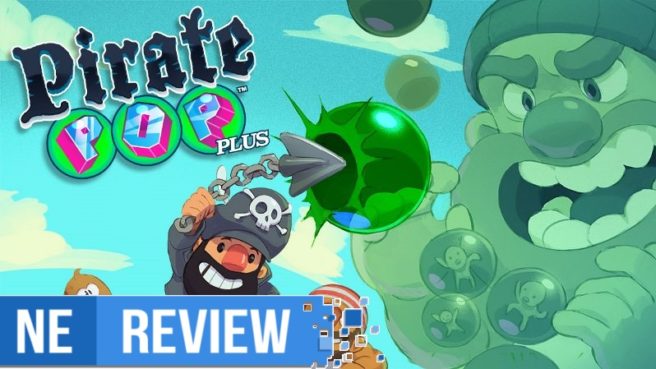 If you’ve ever played Pang, you will understand the basics of Pirate Pop Plus. In an enclosed box you run around on a 2D plane launching an anchor chain and popping bouncing bubbles in an arcade style score attack manner. The biggest differentiator in this spin of the formula is the anti gravity mechanic. As gravity shifts, so does the physics and it provides a surprising opportunity for extra depth and strategy.

There’s a lot more to the shifting gravity than disorientation. For example, when gravity shifts your character will go in a temporary freefall where you have two options: the first, you can land on the new ground and play normally, collecting items and power ups at the expense of dangerous bubbles bouncing at you. The second is that you can maneuver yourself midair and pop bubbles by bouncing on top of them. In freefall the player character is effectively invincible but you will miss out on the many goodies that drop from popped bubbles.

There are two game modes in Pirate Pop Plus, “Normal” and “Hyper”, but in practice I found that hyper is really the only one. It’s best to think of the first as a tutorial mode; it’s slower and takes about twice as long to build the score. Hyper costs 25 coins to play, but once I got the hang of the game, I had no trouble profiting off of each hyper playthrough. The score multiplier doubles, as do the danger and rewards.

The whole game is wrapped up in a cute Game Boy presentation. It seems that the New 3DS version took a lot of cues from the Game Boy Virtual Console. The “L” and “R” buttons will zoom out and show off the ‘pocket game’ console border with the game running at a Game Boy resolution in a one-to-one pixel mode, or in a fuzzier zoomed-in view. Even though this smears the pixels, it was much appreciated on my regular model small New 3DS. Coins that you collect in the game can be used to customize the-pocket game system with borders, button, and decals. Even though it’s a simple game, there’s a lot of cute little touches and little bonus features, including some indie guest star characters.

Pirate Pop Plus makes some smart tweaks to the Pang formula and in doing so it adds a lot of new strategy and room for improvisation. For a score attack game that effectively has one game mode, I still plan on going back to play more. The combination of fun little extras and a highly replayable and addictive gameplay loop make Pirate Pop Plus something I’m glad to have for quick pick up and play on my New 3DS. It’s also cross-buy compatible with the Wii U, which is always a welcome extra.