Posted on November 5, 2017 by Jakob Vujovic(@jakovujo) in Reviews, Switch eShop 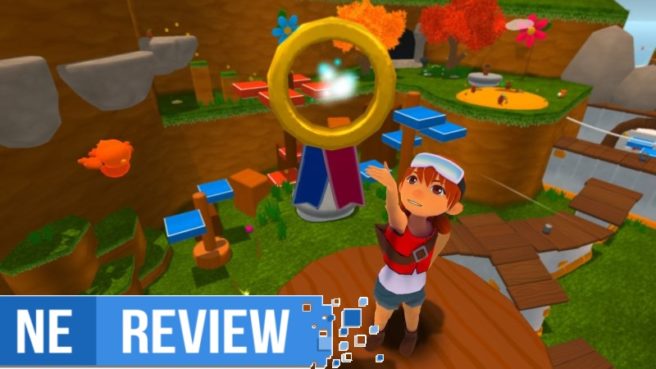 Poi is a tribute to the nearly forgotten exploratory 3D platformer. Nearly, that is, if 2017 hadn’t seen a sudden resurgence of the genre with Yooka-Laylee, A Hat in Time and, of course, Super Mario Odyssey. Poi isn’t inventive – it’s nostalgic to a fault. It hasn’t made strides to progress past Super Mario 64’s game flow of hub world-to-level-to-hub world. Even within that flow there aren’t many ideas or mechanics that haven’t already been thoroughly explored in past 3D Mario games, to the point where Poi stop being referential and becomes just plain derivative. Taken on these terms the game isn’t remarkable, but it’s not trying to be remarkable. It’s a throwback.

Poi begin with the choice of playing as either a fairly generic boy or girl on a quest to become a master explorer – meaning collect every Explorer Medallion, the game’s stand in for Power Stars. As the medallion count goes up, the four main open levels unlock interspersed with a handful of smaller challenge levels that have a tighter focus on platforming. It’s a familiar blueprint. Of course, in imitating Mario 64’s game structure none of this would be any fun if character movement controls were messy. That was Mario’s strongest suit and depending on how successfully its imitators games captured that same satisfying feel of movement largely separated the wheat from the chaff during the proceeding influx of imitators.

Movement controls are far from bad, but nowhere near feeling polished and absolute. Your acrobatic options mirror the basic 3D platforming move set that Mario 64 established, to a tee. All of Mario’s staple acrobatics ranging from triple jumps, wall kicks, side flips, and dives are here with all the freedom to string them together in an improvisational platforming dance. The problem with borrowing so heavily from that particular platforming moveset is that comparisons are inevitable. The player’s moveset is just as expressive with plenty of room for improvisation as in something like Mario 64, but it doesn’t quite have the same satisfying weight and impact. Every move is just a little bit too floaty and awkward in when compared to a game from 1996. 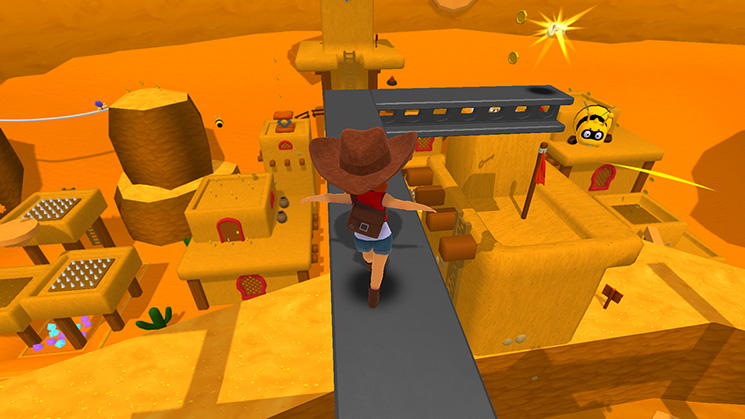 For a throwback that veers so mechanically close to its source material, at least the camera isn’t quite as bad. There is full control with the right stick along with options to toggle between three levels of distance from the player character. Unfortunately, it does require a lot of micromanaging. It fails in some of the intricacies that 3D games have evolved over time. For example, when I jump I expect the camera to pivot toward the ground where I’ll land rather than swinging ever so slightly in the exact opposite way.

Almost every mechanic and level design concept is something seen is pretty directly derived from Mario’s first two 3D outings, with a little Galaxy sprinkled in for good measure. Right down to that raccoon who exchanges blue coins for Shines in Super Mario Sunshine. Everyone loved that part, right? Thankfully there’s nothing as infuriatingly obtuse as blue coins in Sunshine. While nearly everything revists well trodden ground, nothing overstays its welcome. Poi only takes around five hours to finish. Tack on a few extra hours if you want to get all of the Medallions. It has some rough edges, but it’s perfectly brisk.

Poi is a pretty good throwback 3D platformer. While it doesn’t have many ideas of its own and lacks some technical polish, it’s a perfectly pleasant Super Mario 64 imitator that wouldn’t feel out of place on the Nintendo 64. In saying that, its design hasn’t really progressed very far past 1996. Releasing under the looming shadow of Super Mario Odyssey along with a significant markup on Switch is Poi’s greatest detriment.

Poi: Explorer Edition review copy provided by Alliance Digital Media for the purposes of this review.