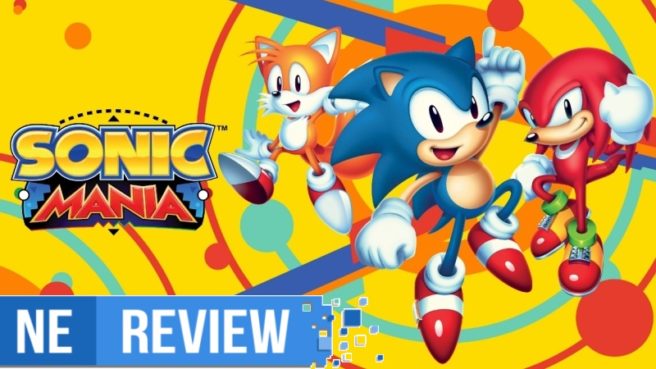 Sonic the Hedgehog is a series that’s both famous and infamous for many different reasons. In his hay-day, Sonic was perhaps the number one rival to Nintendo’s best known character, Mario. During Sonic’s early days on the SEGA Genesis, or the SEGA Mega Drive for those outside of the U.S., the Sonic the Hedgehog titles received high praise from all over game’s media, and was seen by most critics as SEGA’s answer to Mario’s popularity. This success continued throughout Sonic’s 2D era of games, with subsequent entries receiving just as much, if not more praise than the last. However, once SEGA decided to make the jump from 2D to 3D, opinions regarding the changes to the series’ core became a bit more polarizing. Some critics and fans regarded the changes as a necessity to move forward in-step with the evolving industry; while others felt that the series was straying too far from the its roots and was starting to water-down what made Sonic the Hedgehog appealing to begin with. Over the years, SEGA has attempted to bring the series back to its roots in several ways, but none have ever quite captured that same magic that fans were hoping for. That is, until Sonic Mania.

Sonic Mania is the quintessential celebration of Sonic’s roots. Right from the get-go you can tell just how much care and attention to detail went into every bit of this game. From the title screen showcasing Sonic’s iconic finger-wag, to the energetic animated opening movie that harkens back to the retro animated Sonic art-style, players will be able to tell exactly what they’re in for.

Mania starts off with the character of your choice: Sonic, Tails, Knuckles, or Sonic and Tails, racing towards an island. Shortly after landing, they encounter Dr. Robotnik and five of his new robotic generals, the Hard-Boiled Heavies who have just unearthed a strange crystal that warps our heroes to different zones of Sonic’s past. The story is presented excellently through in-game 2D cut-scenes, each having their own unique visual animations. It feels like the perfect way to make Sonic’s return to classic Zones from his past relevant, while also remaining unobtrusive and consistent to the Sonic games of old. 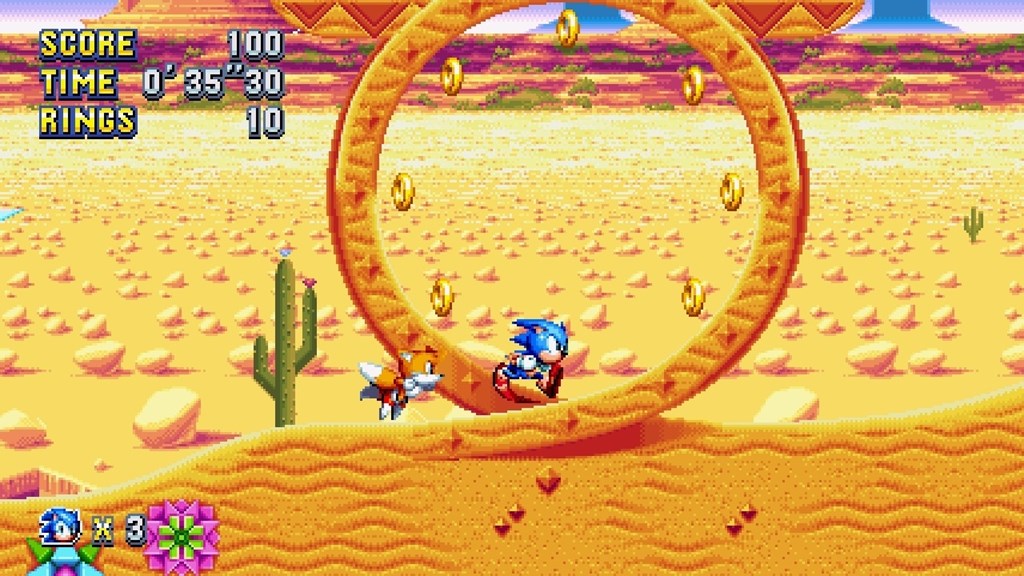 However, Sonic Mania is far from a simple remake of multiple classic games. Each of the returning Zones from previous games feel both old and new in the best possible way. The first Act in a Zone from a previous Sonic title usually ends up feeling similar to the original Acts of said past Zones, with the addition of some level changes, added power-ups, and new boss battles. Act 2 on the other hand feels like an entirely new level with brand new mechanics introduced throughout. Sonic Mania is constantly throwing out surprises that force a smile onto the players face, not only through references to some of the more obscure pieces of Sonic’s past, but from innovative and fun design elements that make you want to keep playing.

Another element that aids to the retro appeal of Sonic Mania is the fact that the game controls just how you’d imagine. The same feeling of building up momentum with Sonic as he speeds through dips and loops feels just as satisfying as you’d remember, and the introduction of unlockable abilities from past games adds even more style and fun to Mania’s gameplay. The game also revamps the difficulty a bit, especially towards the later Zones. Yet, this difficulty is hardly ever attributed to poor design or unfair enemy or obstacle placement; rather a lack of precision on the part of the player. While the feel of classic 2D Sonic gameplay has remained wholly intact for Sonic Mania, some of the things that were frustrating about those games make their way into Mania as well. Every now and again you’ll have Sonic speeding through a stage only to be stopped by a jut in the road or an enemy meandering across the path, bringing momentum to a halt. While frustrating, it’s incredibly easy to quickly build that speed back up again with a quick spin dash to set you on back on your way.

The music of Sonic Mania is also worthy of very high praise. Remixes of past Zone themes sound both familiar and new, and feel just as catchy as their originals. Speaking of which, the original themes from the handful of new Zones introduced in Mania are absolutely wonderful, and feel right at home with the rest of the soundtrack. Studiopolis Zone’s theme in particular, is a fantastic example of this. It feels like something straight out of the 90’s and goes hand in hand with the Zone’s theme of a futuristic Hollywood movie studio. 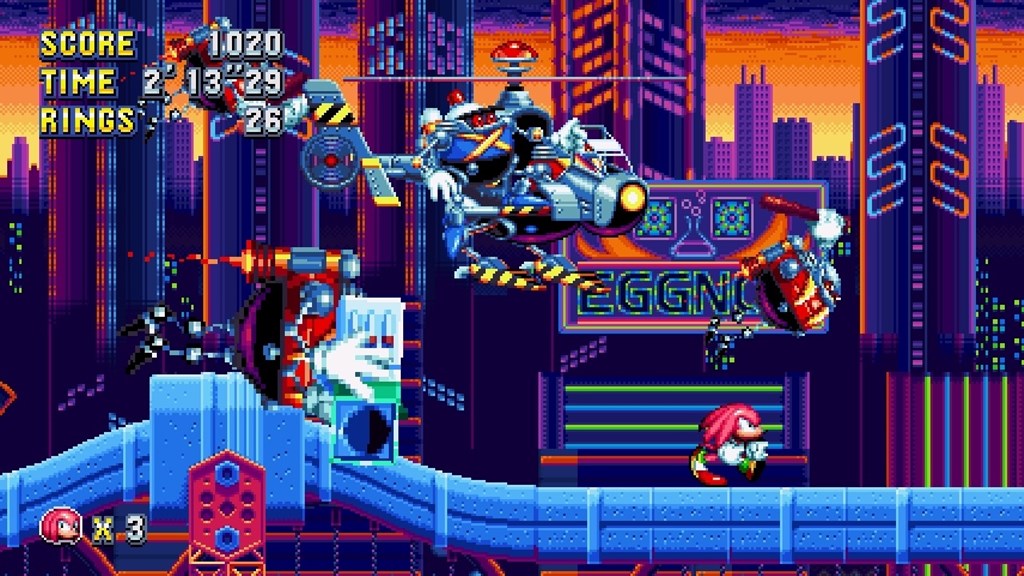 The visuals of Sonic Mania are impressive as well, with updated animations across the board that really help bring Sonic’s 2D world to life like never before. Stage backgrounds pop and look incredible while zooming across levels at top speeds, and the updated color palette helps bring about some truly beautiful and vibrant art. Mania runs at a smooth 60 frames per second in both handheld and docked mode, aside from the 3D Special Stages, which take dips in frame rate here and there.

Along with the campaigns of Sonic, Tails, and Knuckles, Mania also includes two additional side modes to play through as well. Time Attack mode is fairly straightforward: choose a character and get through the chose Act as fast as possible. It’s incredibly addicting to find new routes through different Acts, and the introduction of online leaderboards only add to the desire to want to achieve faster and faster times. Competition mode is a local multiplayer mode that pits you and another player against your chosen character in a race to the finish, all while trying to amass the highest score as possible. It’s a fun and frantic mode that fits right at home in Sonic Mania, although it is a shame that the mode is limited to local play only. Additionally, there a handful of unlockable modes that I won’t go into detail about, but are definitely worth unlocking and trying out.

Sonic Mania is an incredible representation of what made Sonic’s early titles so fun and joyful, while also being a benchmark in Sonic’s history going forward. The combination of fluid and creative level design, an incredible soundtrack, stunning visuals, and surprises around every corner all come together to create something truly spectacular. Sonic Mania knows exactly what it is, and wears its history like a badge of honor – proudly for everyone to see. Sonic Mania proves that not only can creativity and ingenuity revive even the oldest of roots, but proves that the Blue Blur still has plenty of life left in him.

Sonic Mania review copy provided by SEGA for the purposes of this review.