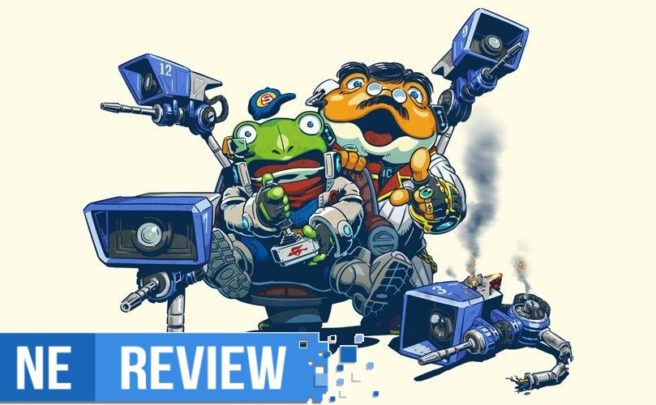 During E3 2014, Nintendo showed off a couple of demos that were meant to highlight some of the more unique uses of the Wii U GamePad. Two years later, fans would hear nothing about either of them until the March Nintendo Direct of this year where it was announced that one of the demos, Project Guard, had been completed. Enter Star Fox Guard, a companion game to coincide with the release of the newest entry in the Star Fox series, Star Fox Zero. Nintendo’s spin-off games of popular franchises have proven to be hit-or-miss over the years, so just how well does this title fare?

Star Fox Guard takes place sometime around the events of Star Fox Zero. You have recently been hired by Grippy Toad, the owner and founder of the mining company Corneria Precious Metals Ltd., who has come under attack by a mysterious group of thieving robots. As the new security guard, you are tasked with defending the facility from onslaughts of these colorful and diverse robots who are looking to take Grippy’s precious metals for themselves.

In order to fend of these mysterious invaders, you control twelve different laser-shooting security cameras invented by Grippy’s nephew: Team Star Fox’s own Slippy Toad. As you defend the many different mining facilities spread across Corneria, Grippy’s company expands to different recognizable locations all across the Lylat System. But that doesn’t stop the persistent band of robotic raiders as you’ll have to fend them off through the many different main missions of the game until you get to the bottom of their mysterious origins. Star Fox Guard’s story is simple and nothing really to write home about, but its goofy and quirky personality may end up bringing a smile to fans of the Star Fox series. 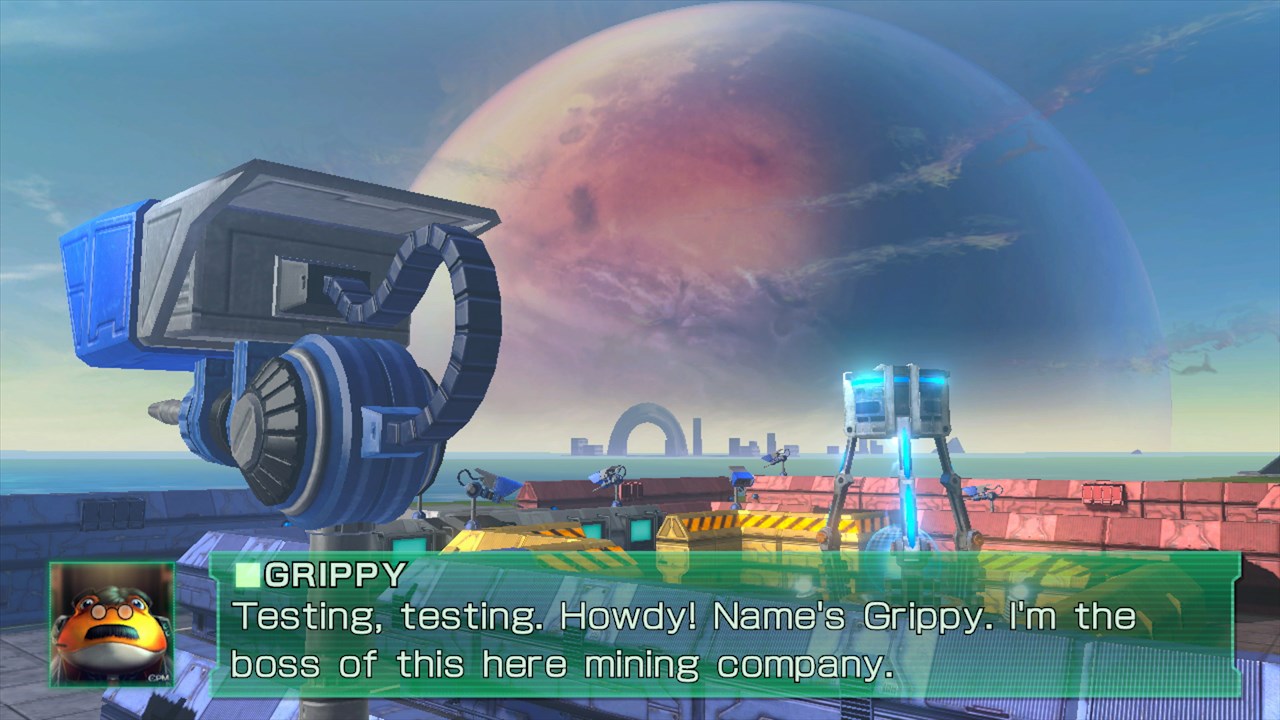 The real draw of Star Fox Guard is its gameplay. This revolves around monitoring twelve different cameras stationed around whatever mining facility you’re defending. Along with all cameras being displayed on the television screen with a large center screen devoted to your current position, the layout of the facility and camera locations are displayed on the GamePad. Monitoring all of these elements during missions creates a fun and frantic atmosphere that will require quick thinking and a watchful eye as you switch back and forth between your television and GamePad trying to fend off groups of incoming robots.

Star Fox Guard looks clean and simple, using the same art style as Star Fox Zero. Enemy robots are, ironically enough, oozing with personality; each having quirky and unique animations that give their cold metal exterior some sense of life. Throughout my playtime I developed a sort of love-hate relationship with specific robots, such as the loveably goofy, yet infuriatingly annoying chicken-esque robot known as the Clucktron. The soundtrack, however, feels fairly simple and at times repetitive, with no real standout tracks sticking with me throughout my extended play time with the game.

Once you select a mission, you have the opportunity to see the entire layout of your current facility, its camera placements, and a general display of how many robots will be coming through the multiple different entry ways of the base. During this time, you get to familiarize yourself with the positions of the cameras and make adjustments to their placements wherever you see fit. You’ll also get a quick glimpse of which combat robots will be invading in your current mission. This setup period is where the bulk of Star Fox Guard’s strategy comes into play. Positioning cameras is fairly simple, only requiring you to tap and hold the camera icon on the GamePad and then drag and drop it on top of any wall in the facility. Cameras can also be aimed with the use of either the touch screen or the left analog stick and Guard gives you the much appreciated option of choosing between standard or inverted aiming. Having so many different ways to customize camera layouts is great and makes strategizing easy and manageable. 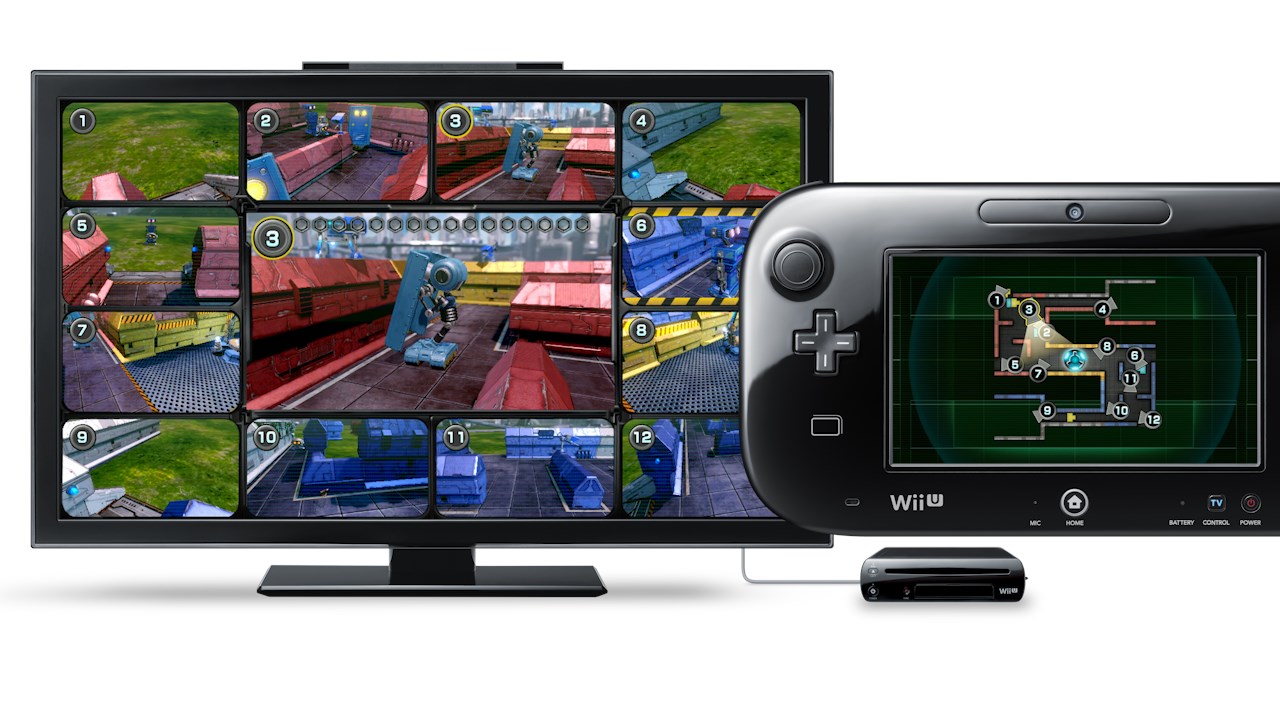 Fending off robot after robot can be fun and addictive, however it can also begin to wear on you after long stretches of time. There are no motion controls to be found in Guard, only using the analog stick for slow and calculated aiming or the touch screen for a faster and more sweeping range of movement. You will definitely find yourself switching between the two as the game ramps up in difficulty. The only real problem I encountered with aiming the camera was while using the touch screen. Sometimes tapping and holding cameras to pick them up and move them felt a bit clunky and finicky when things got hectic. Other times when rushing to move a camera to defend my base, I’d try and pick up a camera only find myself grabbing onto the field-of-view cone that quickly rotates the camera. However, these issues were only a minor annoyance in regards to the otherwise polished mechanics.

The game starts off fairly straightforward, but the variety and difficulty ramps up quickly by introducing dozens of new and unique robots that require different tactics to take out. The enemy robots are split into two main classes: chaos and combat. Combat classes are the main threat during missions, because if even one of them manages to infiltrate your base and reach the central tower, it’s game over. The combat class of robots is fairly diverse with each robot having its own unique stats and abilities. Some robots scale walls to reach the center while others stealthily sneak by your cameras unnoticed until it’s too late. The main role of the chaos class of robots is to distract you from the combat class. Chaos bots will do any number of things to hinder your defenses like creating smoke clouds that obscure vision, disrupting a camera’s screen, or even destroying cameras completely. The amount of variety and multiple different combinations that are created from the diverse cast of robots keeps each mission fun and more or less unique.

Missions come in the form of standard story missions that move the plot along and extra missions that you unlock as your rank increases. Extra missions introduce a certain rule or task you must complete while also defending your base from combat bots. As you complete both types, your rank increases allowing you to unlock new extra missions and unique cameras with specific abilities; like camera’s that can shoot multiple targets at once or cameras that freeze enemies solid allowing them to be shattered by a single standard laser shot. 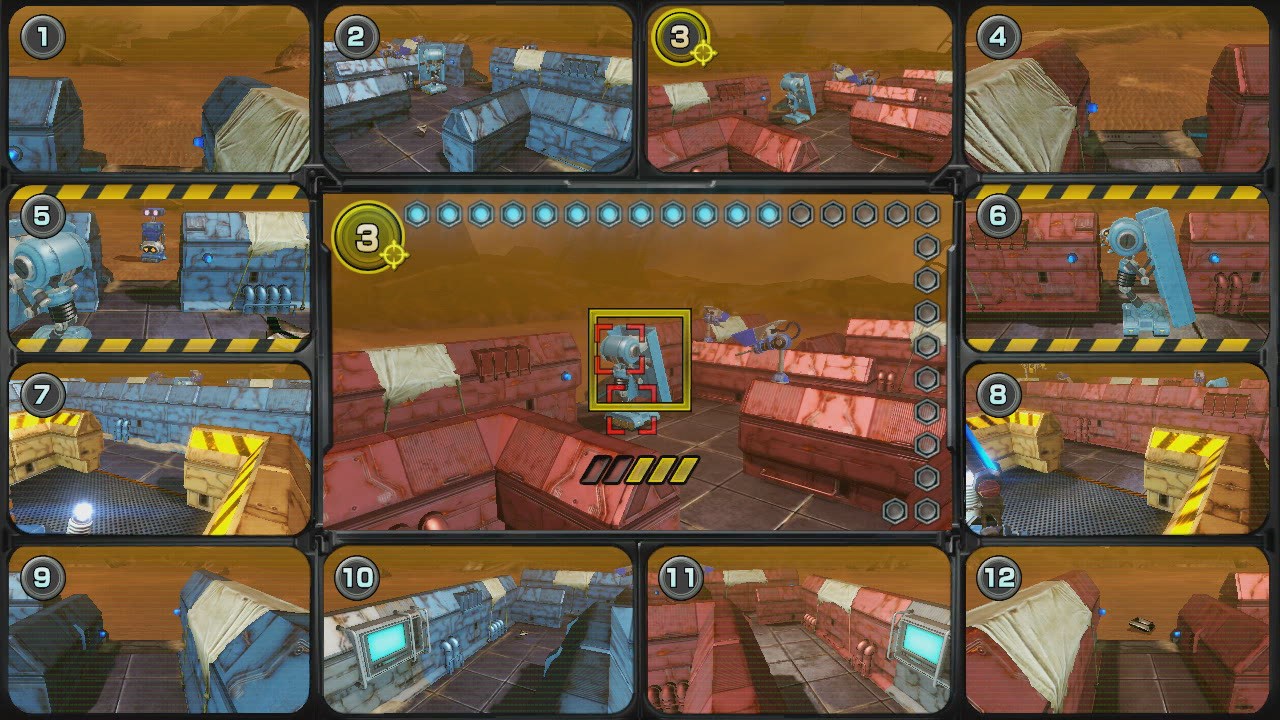 Along with single-player missions, Star Fox Guard includes a mode called My Squad. You can create your own wave of robots here that players online must combat and vice versa. Creating waves of robots is fairly straightforward, requiring you to drag and drop certain robots on to a timeline that decides when they will arrive on the field. You can also decide what kind of path the robot will take, choosing between a few different guided routes to the central tower. However, creating squads can feel a bit limited, with restrictions on how close the same type of robot can be placed on the timeline or a limit of how many robots of a specific type can be used overall. While you can still make fun and challenging robotic armies for players to fend off, I felt like the mode had the potential to give the player much more freedom while still staying balanced.

Another great feature is the ability to view a replay of the mission you just played through after you’ve either failed or completed it. You can switch from a top-down view of the entire map that shows off when and where enemies approached from, the paths they took, and even which cameras you switched between throughout the mission; or you can view the replay from the normal view. This feature is especially helpful on difficult missions, as it helps you identify where robots slipped by unnoticed allowing you to adjust your strategy and hop right back into the mission to try again. The replay feature along with the Robot Encyclopedia, which gives you stats of robots you’ve encountered, were really nice additions that demonstrated the amount of polish that went into Guard.

Star Fox Guard is a unique and enjoyable strategy game, but it’s a bit of a strange case. On one hand it doesn’t really feel light on content and it’s clear that a fair amount of thought and polish went into the it; but at the same time Guard doesn’t really feel like a standalone game. Because of that, I personally feel that Guard would be best experienced alongside Star Fox Zero when you just want to take a short breather and experience something different.

With that said, the game can be purchased alone for about $15 on the eShop or for no extra cost with a physical copy of Star Fox Zero. With a nice amount of hectic fun and strategy meshed into one package, Guard can keep you entertained for a nice chunk of time. I wouldn’t recommend trying to marathon large amounts of the game all at once though, as fending off wave after wave during continuous missions can get just a tad repetitive. But if you take your time with Star Fox Guard and overcome its slight learning curve there is a lot of fun to be had. Overall, I’d say Star Fox Guard earns a place among the many strange spin-off games from famous Nintendo franchises that ended up working surprisingly well.