[Review] The Next Penelope

Posted on December 20, 2017 by Jakob Vujovic(@jakovujo) in Reviews, Switch eShop 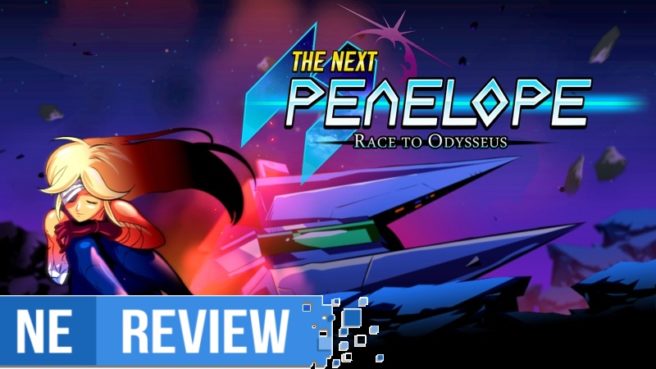 Set in a far-future interpretation of one of the oldest pieces of western literature, The Next Penelope has an engaging aesthetic wrapper for its gameplay mixture of top-down shooter and Micro Machines style racing. As novel as space Poseidon might be, these narrative elements are also its flimsiest facet. The snippets of dialogue that are peppered throughout the game’s five main major challenges fumble with some inelegant wording, odd grammar, and a few comma splices. The premise isn’t given the space to develop into much beyond passing references to the Odyssey. Fortunately, this is all just window dressing – the game’s hectic arcade-style shooting fares much better in blending somewhat dissonant gameplay concepts. It comes together as an impressively well constructed genre hybrid.

The story starts at Ithaca in the year 3044. Its king, Odysseus, has been away at sea (or in this case, space) for ten years and his kingdom is now under attack by Poseidon. Naturally, it falls on his wife Penelope to set out in her spaceship in search of her lost king. That’s where the gameplay starts and the story takes a backseat. Each level has Penelope entering the territory of a creature from Ancient Greek mythology, reimagined for this sci-fi setting. Most dialogue plays out something like this: “Sorry, (name) but I have to find Odysseus.”; “I can’t let you do that Penelope. Now enter combat with some ships.” The best part of the dialogue are bright and bold animated character portraits.

These exchanges are over quickly, affording the bulk of playtime to the wonderful ship combat. The basic steering might take a little getting used to depending on how familiar you are with RC Car controls. Penelope’s ship accelerates on its own with no brakes, and steering left and right aren’t relative to the ship’s direction on screen. Rather, pressing left always steers the ship counterclockwise, and pressing right always steers its opposite. These controls really aren’t a problem since the game has a pretty generous difficulty curve. Developing your own ability to play this style of steering is part of the fun and quickly feels natural. 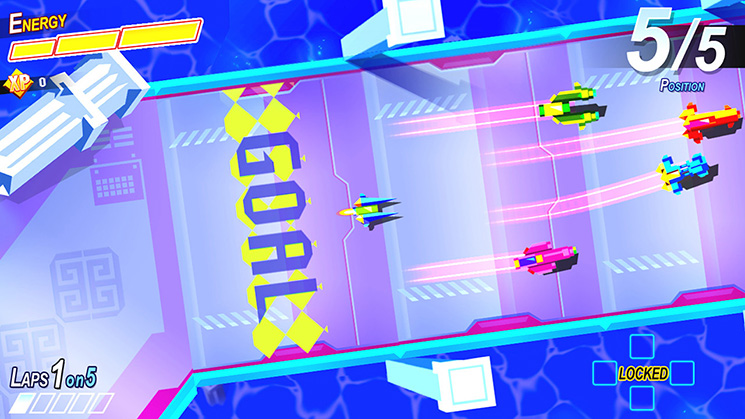 Each level comes in a set of three stages. The first is always a tutorial for some new ability of Penelope’s ship. The second, and usually the strongest part, is a race where you are given this new tool and instructed to win a race against AI opponents. Anything goes in these top-down combat races. They’re always fine-tuned to show off the density and layering of design that went into each of the ship’s offensive abilities.

The most satisfying of those abilities have a dual purpose. For example, the boost has the obvious advantage of speed in a race, but boosting into another racer from behind will wipe them out. Each ability’s usage is dictated by an energy meter that doubles as the ship’s health bar. Other offensive options like the landmine that drops behind your ship uses a significant portion of its energy bar, but if an enemy drives into it you’ll be rewarded with a small surplus of energy recovery. Each of these options feed into the larger system of managing your ship’s energy in the way that can most efficiently win whatever scenario the game throws your way. By the time you have every ability and the game lets you access its post-game levels things get delightfully tricky. At its best, The Next Penelope isn’t really the top-down shooter it might initially seem. Instead it’s a slightly unconventional but really well executed combat racing game. 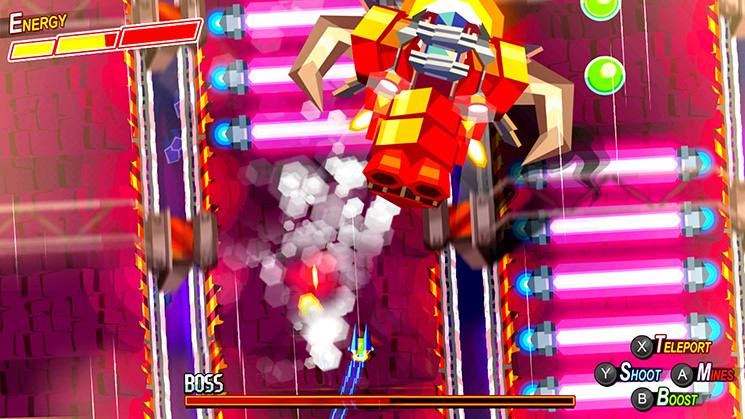 The third part of every stage is always a boss battle. Equipped with all the same controls and abilities as the combat races, you’re dropped into a big open space with a boss floating somewhere in there. This is where the premise established in the races is flipped on its head; rather than unconventional combat racing, it becomes something much more akin to an arcade shooter with 360 degree control. That control is stifled by the ship’s car-like physics. Each one consists of some variation on drifting around a large boss monster in order to get the right angle for a window of attack, avoiding accelerating straight into them. These bosses aren’t a detriment to the game, but off the top of my head I can only remember one among them that I thought presented a particularly unique challenge – that is, without counting the final challenge which is disappointingly conventional and sloppy in execution.

There’s also a local multiplayer party mode for up to four players. Each driver controls their own ship carrying a single weapon in a combat race to the death. It’s a fun enough party mode that quickly devolves into complete chaos when four ships are on the same screen firing laser ammunition everywhere. With the game’s simple directional controls this mode feels right at home on the Switch’s single Joy-Con.

Shrouded in a fun premise that doesn’t really go anywhere, The Next Penelope is held up by its unique and exceptionally well designed take on combat racing. Every offensive ability the game gives you has cleverly layered use cases. Each scenario enables a generous variety in player planning, approach, and reaction. Despite a weak finale, it all culminates into something that’s both satisfying during play and from the larger interplay of its meta-design.

The Next Penelope review copy provided by Seaven Studio for the purposes of this review.

More: Aurelien Regard, highlight, Plug In Digital, Seaven Studio, The Next Penelope, top