Posted on July 19, 2020 by Campbell(@CampbellSGill) in Reviews, Switch 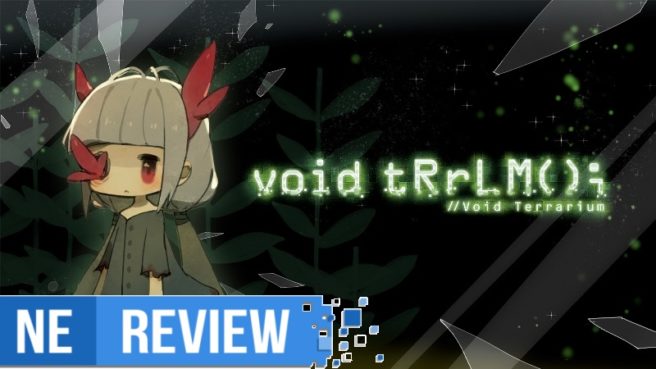 void tRrLM(); //Void Terrarium can feel as overwhelming as its full name. It is a touching narrative of hope and perseverance, about the power of human connections amid uncertainty. Yet at the same time, it is a blisteringly difficult and infuriatingly random roguelike, one that revels in placing insurmountable roadblocks in front of you at every step throughout its procedurally generated labyrinths. It is an inherently divisive game that is bound to hit home for some players, while alienating many others. Void Terrarium offers a beautiful and emotional experience for those who see its journey through to its conclusion, but getting there is a question of how much you’re willing to endure.

Humankind is done for in Void Terrarium. The world has fallen under an aura of poisonous pollution, and humanity’s attempt to find a new horizon beneath the earth’s surface has led to a quick extinction. The planet is now a wasteland populated by rogue robots and monstrous creatures who roam free without human intervention. Yet one human survivor remains: a little girl named Toriko. She is discovered by a silent, nameless robot and a large PC called factoryAI, both of whom mourn the loss of humanity. Together, they determine to do everything in their limited power to nurture her and keep her safe.

What follows is a desperate series of scavenger hunts to discover materials, forage for edible food, and create a livable Terrarium where Toriko can grow up and be safe, happy, and healthy. The Robot and PC effectively become her parents, finding food for her to eat, nurturing her when she is sad, and nursing her to health when she falls ill. 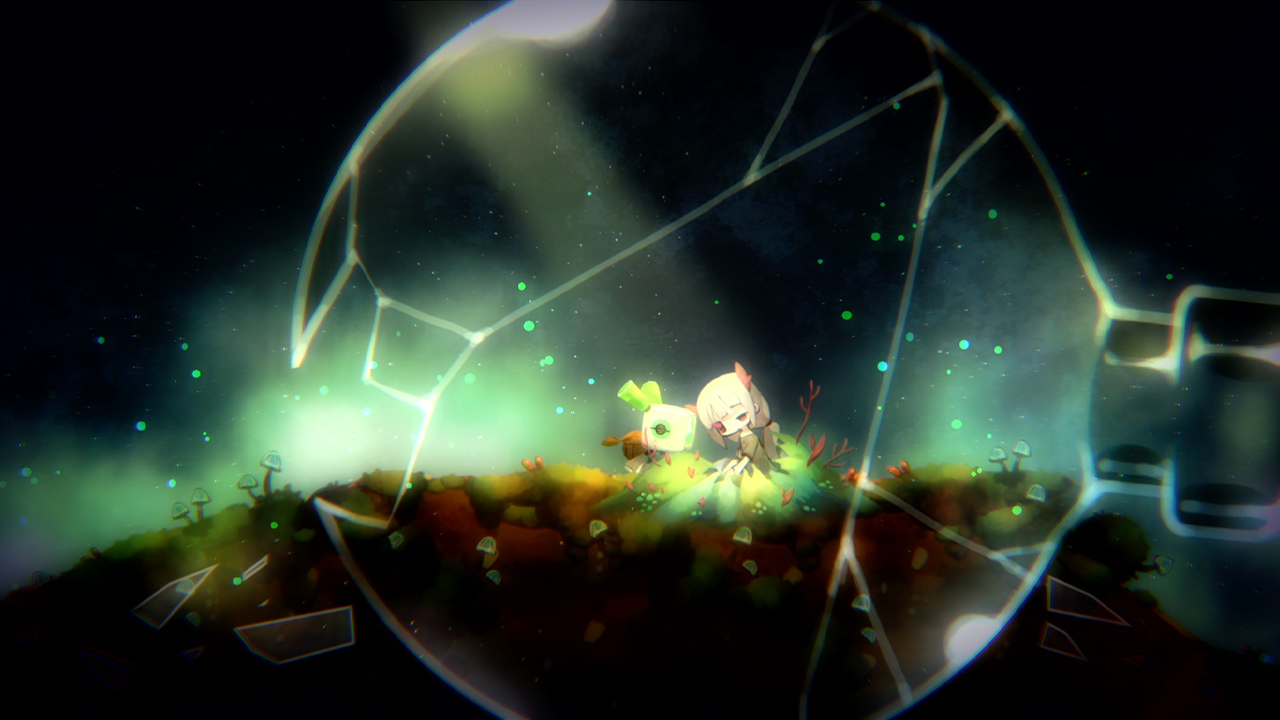 It is genuinely touching to watch the robot and factoryAI watch after Toriko. They care about her, and fret about making the terrarium as safe and healthy for her as it can be. The world of Void Terrarium is a broken one, filled with sorrow and tragedy for the loss of humanity, but the two machines find hope in Toriko. Their affectionate, single-minded dedication to the girl’s happiness sets Void Terrarium apart in a market filled with other apocalyptic roguelikes. Void Terrarium is about hope, about finding love and life at the end of the world. There’s something beautiful about that optimism, which breathes life into an otherwise tired post-apocalyptic setup.

These intimate concerns bleed into the gameplay. To provide for Toriko, players control the robot and venture into procedurally generated labyrinths to gather resources for food, shelter, cosmetics, and other upgrades. Void Terrarium never lets Toriko out of your mind, even when you’re ten levels deep in a dungeon. There is always a monitor in the bottom left corner of your screen indicating Toriko’s current condition. It conveys whether she is hungry, sickly, or dirty, and if you notice any of these symptoms, it’s your duty as her caretaker to quickly find the necessary resources and rush back home to nurse her to health.

If you’ve ever played a classic top-down dungeon crawler like the Pokemon Mystery Dungeon games, you know what to expect from Void Terrarium’s dungeons. Every action constitutes a “turn,” which consumes your total energy. Run out of energy in the middle of the dungeon, and it’s an automatic game over. You’ll have to watch every move and carefully consider every action if you want to survive and dig down to deeper layers of the labyrinth. 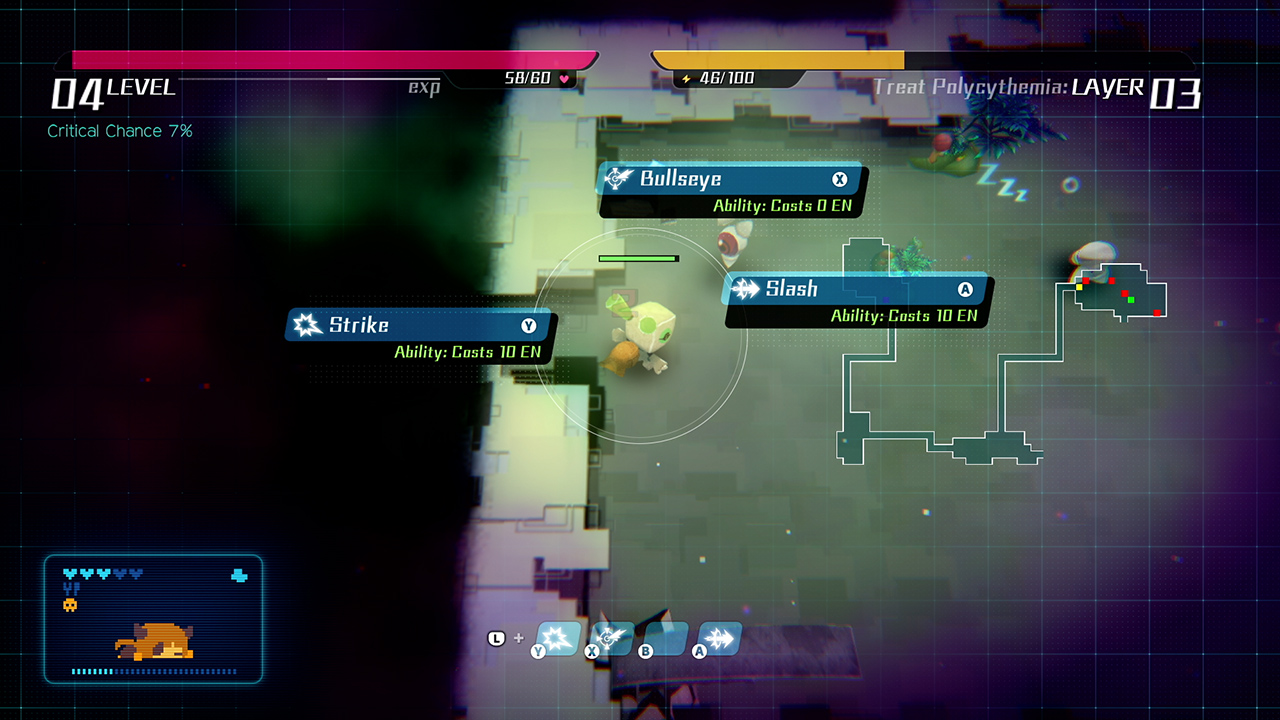 You’ll have to keep track of more than just your gradually depleting energy meter as you trek through each dungeon. Wastelands are filled with enemies, some that are mere inconveniences and others that pose a genuine threat. Each labyrinth has its own set of enemies, ranging from little droids to bizarre bird/beetle hybrids to ravenous cows – the apocalypse has done wonderful things to bovine life. You’ll need to make adequate preparations before you can hope to beat many of these opponents, however. Barring a few stat upgrades you can make at your home base, you begin each labyrinth from scratch. No improvements, no items, no improved stats. You gain experience and level up throughout the labyrinth, and with each new level, you can choose a randomly drawn status boost. And once you die, you have to do it all over again—none of your upgrades carry over, and instead, you’re back to Level 1 once again. That’s not to say that nothing is gained from each mission. The items you discover in each playthrough are converted into resources, which can then be crafted into items for Toriko. But aside from these additions, every playthrough is completely random and starts from Square 1.

Unfortunately, while Void Terrarium’s roguelike elements ensure variety, they also fall prey to some of the greatest pitfalls of the genre. Since each labyrinth is procedurally generated, they vary wildly in quality and difficulty. Sometimes you can blitz through several floors in a minute or two, whereas other dungeons will be long, confusing, and exhausting labyrinths where enemies are plentiful, items are scarce, and your precious energy drains out with no exit in sight. Of course, some element of randomness comes with the genre, but there has to be a point where the randomization yields to effective game design. Unfortunately, Void Terrarium is uncompromising in its dedication to randomness, a commitment that ultimately brings the game down.

What this creates is a cruelly challenging experience. You will die often in Void Terrarium, but the problem is that death rarely feels like it’s your fault. Instead, it can feel like the game is cheating you; how were you supposed to be prepared to spawn into a room right next to a high-powered enemy? How is it fair that you’d get cornered by three high-powered enemies at level 1, with only the small handful of useless resources that the game randomly gives you to protect yourself? Challenge is always welcome in a roguelike, but Void Terrarium brutally crosses the line. 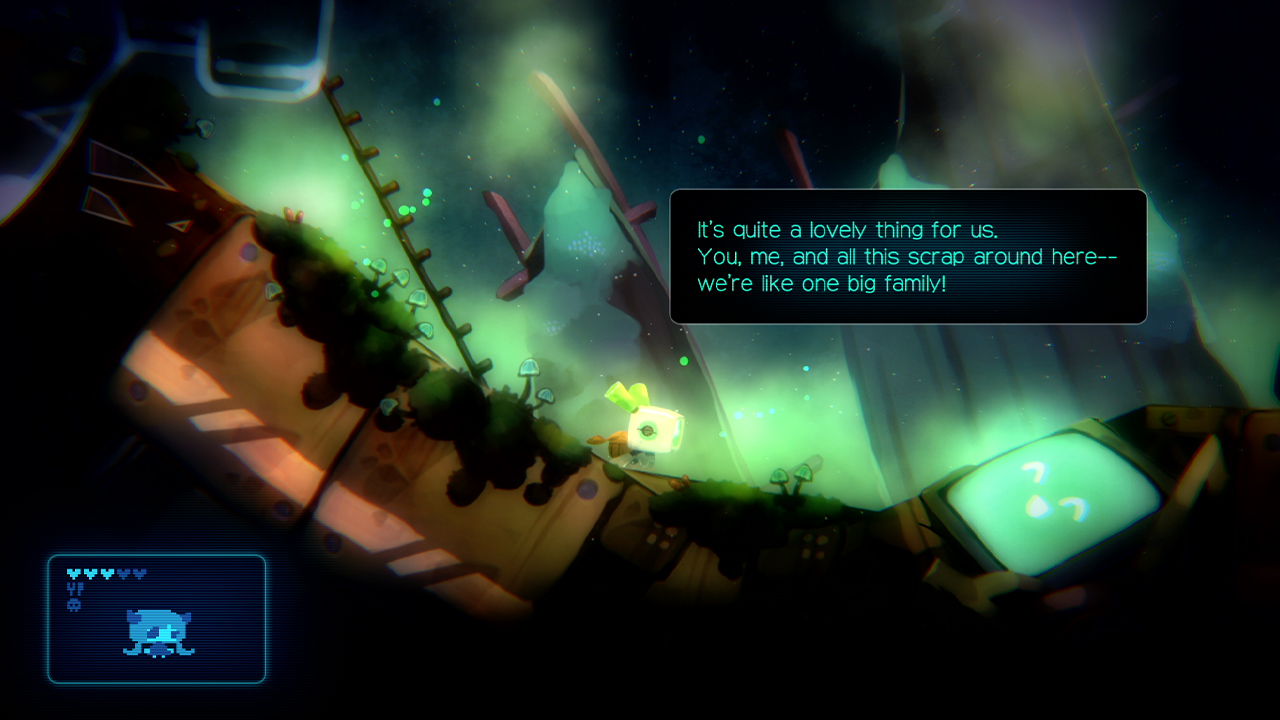 The difficulty won’t be a dealbreaker for everybody, but it’s a great shame that the game’s poignant storyline is contrasted with its harsh and unforgiving gameplay. It can make story progression feel like a genuine chore, a stark contrast to the loving care that the game naturally encourages players to feel for Toriko. It drastically diminishes Void Terrarium’s wider appeal. It’s unlikely that many people will be interested in trudging through missions over and over and over again, having to endure grueling enemies and harsh resource management, just to see two robots care for an anime girl, no matter how cute she may be. This difficulty level is an unfortunate design decision that drastically handicaps what could have otherwise been a touching, narrative-focused take on the roguelike genre.

At least Void Terrarium’s presentation should be more universally appealing than its gameplay. It features a haunting soundtrack with spacey synths and driving percussion that strongly complement its post-apocalyptic setup. It’s a gorgeous game, with beautiful hand-drawn art in the side-scrolling Terrarium segments and charming Claymation-Esque 3D models during dungeon exploration. The graphics hold up well on Switch, even if it looks a bit soft in handheld mode. Unfortunately, this presentation is also marred with some performance issues—it abruptly crashed three times throughout my time with it. This isn’t too much of an issue thanks to its robust autosave system, but it’s nonetheless annoying. The Switch version generally performs smoothly, but the frame rate can chug at times when there are larger numbers of enemies onscreen. Again, this isn’t a major problem either since this is a slow-paced, turn-based game, but it’s still a blemish on the overall package.

void tRrLM(); //Void Terrarium builds a fascinating core premise about love and compassion amidst an apocalypse. At the same time, its gameplay structure can be so cruel that many players will likely have a hard time enjoying its beautiful visuals or poignant story. If you’re a longtime roguelike player, you might be able to thrive in this difficulty, but for a wider audience, it is likely more frustrating than fun. Void Terrarium’s primary appeal is its story and characters, but its gameplay makes it difficult, if not impossible to fully appreciate them. But really, when a game’s name isn’t even in any human language, perhaps that’s to be expected.