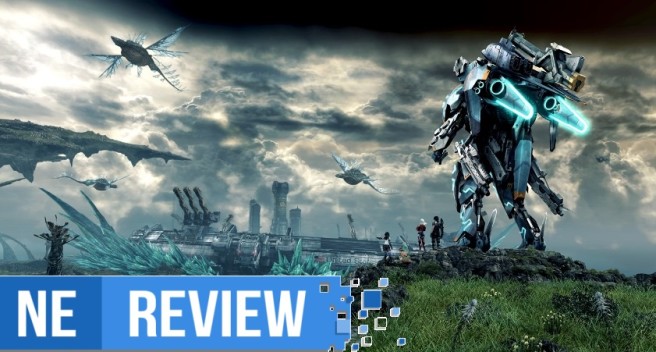 As a JRPG fanatic that’s been craving a first-party AAA open-world experience on the Wii U since its initial launch in 2012, I’m happy to say that the wait is finally over as we’ve been graced with Monolith Soft’s ambitious Xenoblade Chronicles X, the spiritual successor to Wii’s equally ambitious and captivating Xenoblade Chronicles which was recently brought over to the New Nintendo 3DS in an updated fashion. Xenoblade Chronicles X puts players in a rich, vibrant world filled with a myriad of monsters, locations, and a deep story that tells the tale of civilization starting over, but bringing all these great things together in a cohesive way doesn’t go without fault.

Players will be brought into the world of New Los Angeles – frequently abbreviated NLA – following the recent destruction of Earth and most of its inhabitants by an alien race. Your character, which you can customize to your liking, will be set as the main protagonist and a survivor of one of the very few ships that managed to evacuate Earth in time before its demise. The character creation tool following an epic opening cinematic in Xenoblade Chronicles X is deep enough to make it feel like you’re creating someone that you feel you won’t see a duplicate of, but not intricate enough to the point where you can truly differentiate yourself between other players and NPCs. While it offers a lot of options when it comes to styles and colors, anything on a granular scale isn’t there such as size and ratio adjustments (except for height), manipulation, and other options you would normally spend hours alone on. As someone who frequently spends an absurd amount of time in character creation menus trying to make what I have in my mind as if doing a painting, I was surprised by how fast I went through it, despite the options given to me. 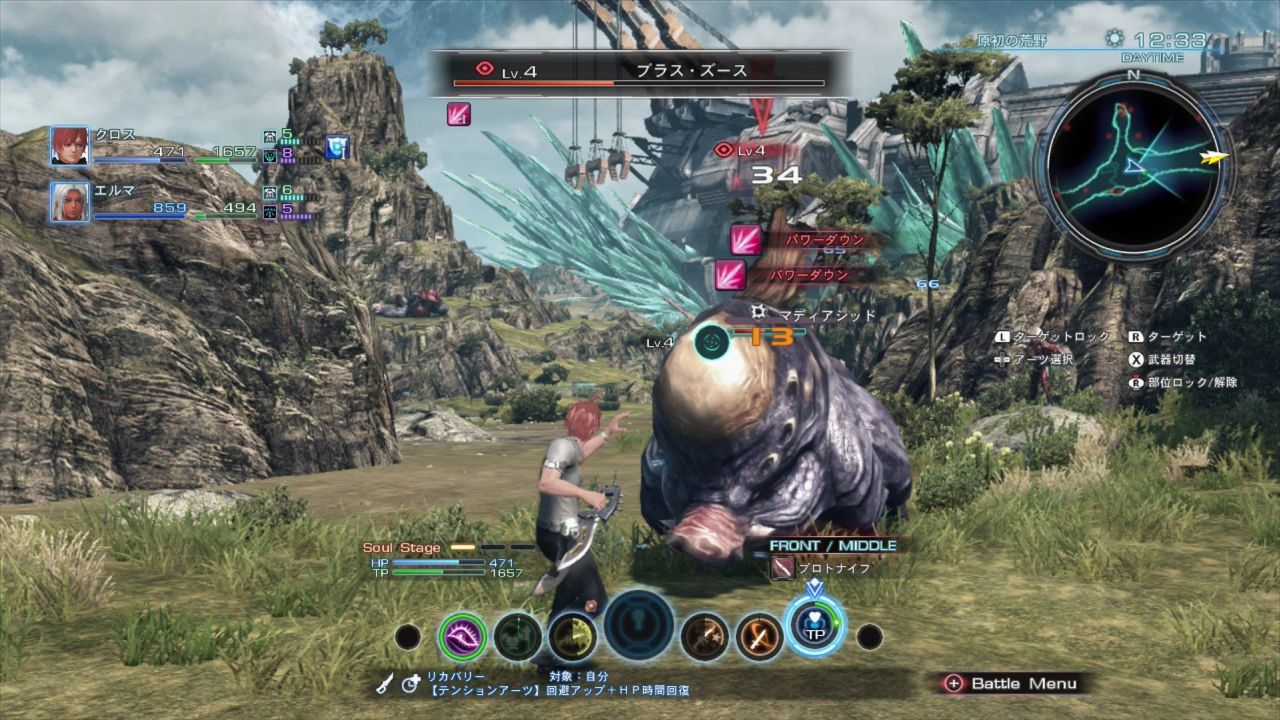 Immediately after creating your character, you’ll be introduced to the brand new planet Mira which former inhabitants of Earth now reside. Civilization is still rebuilding and adapting itself to the brand new planet, but progress is being made quickly. It’s not long after you’re brought over to NLA to join their military group BLADE and aid in rebuilding life as well as looking for any other survivors such as yourself.

The battle system in Xenoblade Chronicles X works in a similar fashion as Xenoblade Chronicles, giving those familiar with the original title an easy pickup. For those new to the series, it’ll be a little difficult to understand at first, but as you go on it’ll make sense how you can easily switch between weapons, specials (known as Arts), and comprehending cooldowns while using each effectively. Attacks are done automatically, so simply approaching an enemy will initiate combat and your character and teammates will start acting accordingly. This may throw some people off, but being able to move around while doing so and focusing on buffs and specials instead makes sense in the long run. The only issue is that because it’s automatic, I frequently found myself going into battle in hostile environments when I really didn’t want to just because I got a little too close. Luckily fleeing is usually easy – just simply get far enough from the combat zone and you’re back to taking in the sights.

One problem I had, despite the gameplay itself being a crazy amount of fun, was that the tutorials weren’t very clear when it comes to combat and controls. Everything is done in a trial and error fashion, and never in my life have I played an RPG and had the feeling of button mashing as if I was playing a convoluted fighting game. The UI is all over the place when you get into battle, and the text is extremely small no matter where you are. I played Xenoblade on four separate TVs, all different sizes and resolutions just to get a feel of how it adapts to each display, and text is difficult to read in lots of cases. Subtitles when voice acting is ongoing is fine, but while playing it can really hurt your eyes a bit. That being said, it’s difficult to recommend off-TV play with Xenoblade Chronicles X. With the amount that goes on in the UI, you’ll need all the screen space you can get, so utilizing both the GamePad and your monitor is the best course of action; stay away from off-TV play. 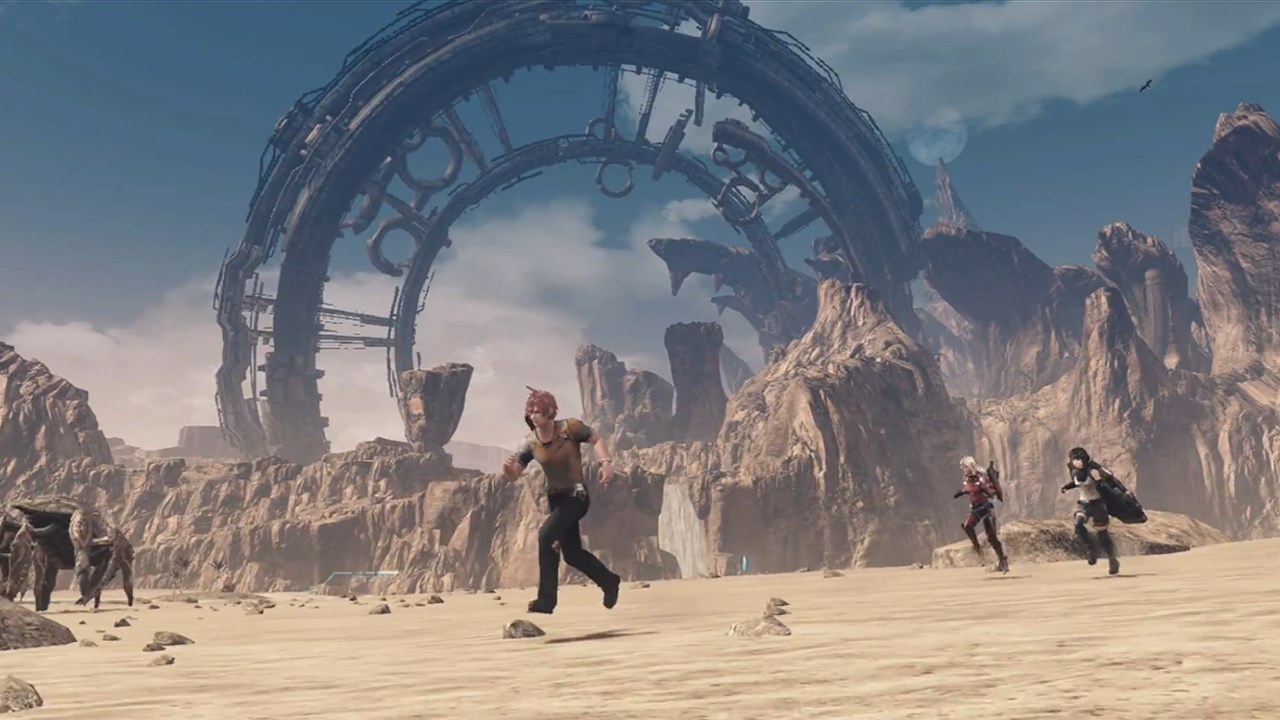 Despite Xenoblade Chronicles X’s absurdly slow opening and character development, things really pick up once you obtain Skells. Unfortunately, you can’t obtain Skells until way later in the game – we’re talking hours among hours and even more hours among those hours – but once you obtain them and traverse through Mira, it really makes you appreciate and see the game in a whole new way. Players may feel a little disheartened by the fact that they can’t get Skells immediately, especially since most advertisements, including the box art, has them front and center, but obtaining them is probably one of the biggest achievements in the game and one that really makes you feel worthy in the world. Flying through the skies and engaging in aerial battles will bring the overly-obsessive mech fans inside of us out in full force. The experience changes entirely once you obtain a Skell, and it’s for the better. It truly makes you appreciate everything you’ve done up until then, and despite the fun and freedom felt flying around, it’ll make players feel just as excited to get back on the ground on foot to explore every nook and cranny, especially in locations they couldn’t access beforehand. The detail both above and below, in the land, water, and skies, is a sight to behold in Xenoblade Chronicles X and the sheer size of it all is one to applaud Monolith Soft for.

On a technical level, Xenoblade Chronicles X is impressive. Frames are mostly solid whether in or out of combat, pop-ins really aren’t all that bad, nor are loading times. The longest loading time I encountered is while booting up the game itself. When playing the disc version without the four data packs, this could take an upwards of two to three minutes from the moment you select it on the Wii U’s dashboard to finally getting to controlling your character. After that, however, loading is fairly quick. The loading bar at the bottom usually only gets about half way before shooting up to 100% and getting you in. This doesn’t take more than a few seconds, and downloading the different packs will only save you one or two seconds in let’s say an average of ten seconds. For a few gigs of space, I don’t personally feel that’s all that worth it to download. Textures could be a bit better in some of the stationary models. Lots of jaggedness made me feel like I was looking at extremely dated assets that were simply inserted just to make the cities or environments feel more “alive”, though all it really did was make me chuckle. I’m not one to care about graphics, and the game itself overall is pretty, but the lack of detail in character models and various inanimate objects was jarring in some cases. 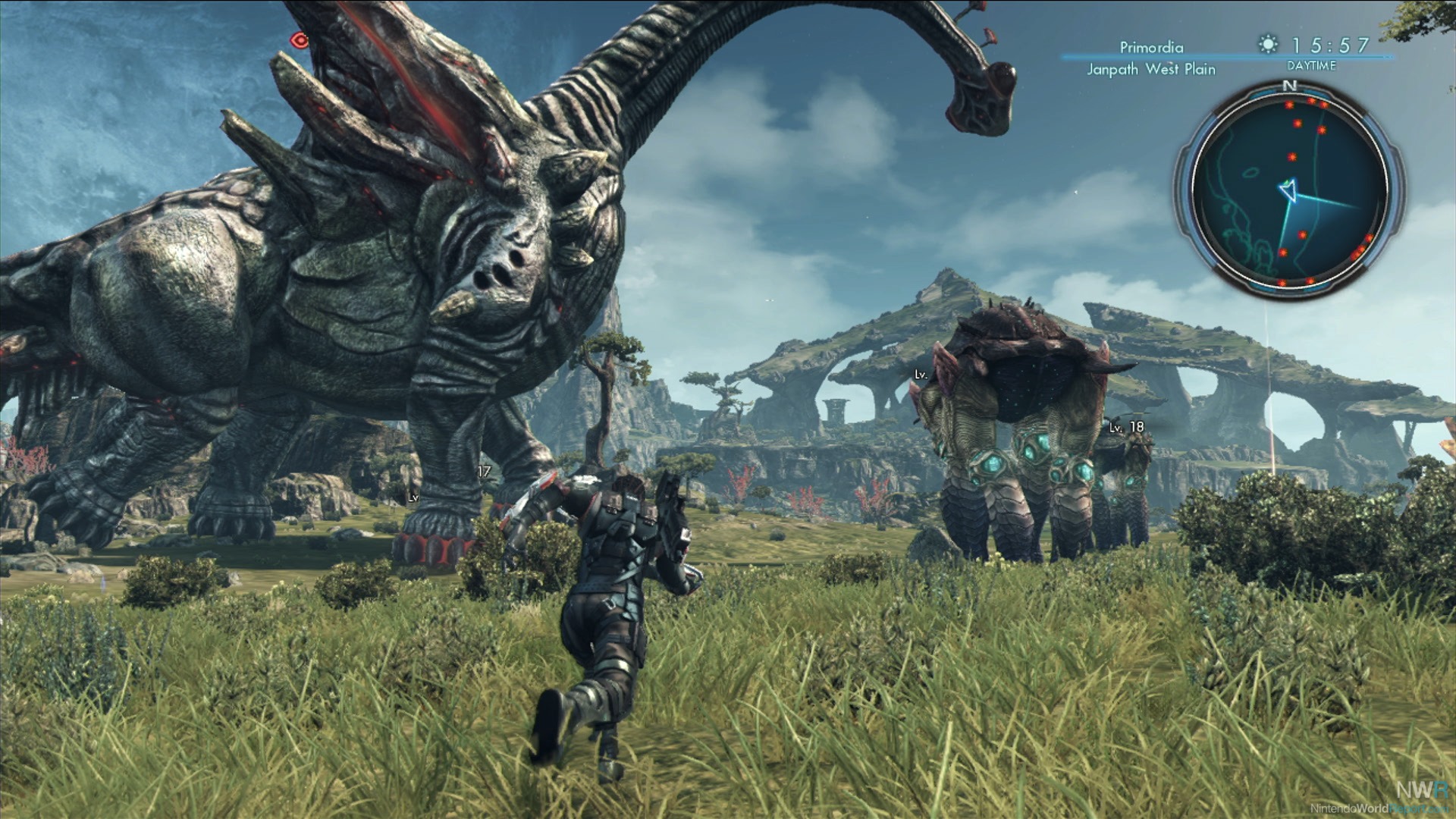 Despite the meticulously crafted world of Mira that Monolith Soft has put together, a proper JRPG wouldn’t be what it is without an incredible soundtrack to go along with it. Just like the original Xenoblade Chronicles, Xenoblade Chronicles X delivers a score that makes the game whole. It’s beautiful and every section of the world has a piece that is perfectly placed. The composition is unprecedented, and it’s a shame that a soundtrack doesn’t come with even the standard editions of the games as I feel this is one everyone should have in their collections. Hard work was undoubtedly put into the music (as with previous iterations of the Xeno series), and adventuring with it has never felt so epic. Cut-scenes are brought to life even more so with the sounds of strings and drums reverberating across Mira and Xenoblade Chronicles X. As if Xenoblade wasn’t epic enough as it is, the music brings polish and life into an already vibrant world filled with wonder and excitement.

Those that have been looking for a large-scale adventure that will grant you hours of gameplay and virtually endless fun on Wii U finally have the Holy Grail of them all. Xenoblade Chronicles X comes just in time this holiday season for everyone to relax and escape into the world of Mira and New Los Angeles and experience the eerie sci-fi tale of what life would be like if Earth became no more and civilization had to start over on a new planet. Though the controls are stiff and UI is overwhelming, Xenoblade Chronicles X will undoubtedly grow on new players that are willing to take the time to invest into it and inevitably be captivated by the gritty yet uplifting story of alien races at war in epic space battles and the triumph in rebuilding and never giving up hope. Cut-scenes are of top quality and are often palpable with all they try to accomplish. Skells feel great to fly around in and traverse the skies at high speeds with, with a detailed world down below to explore by foot with endless possibilities and surprises. The Wii U has been lacking in large-scale games like this, and Xenoblade’s arrival is long overdue and one that belongs in every system owner’s library.