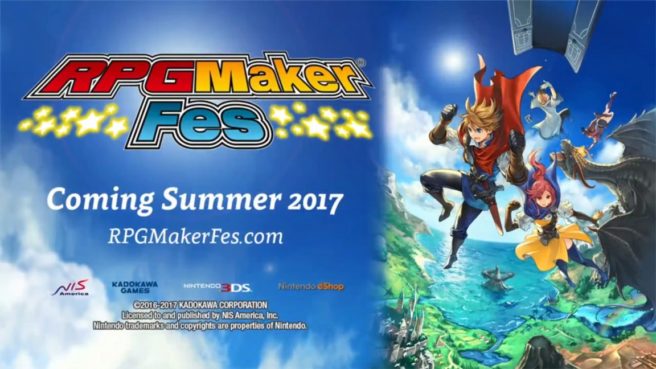 NIS America sent out a new wave of screenshots and details for its upcoming 3DS game creator RPG Maker Fes.

RPG Maker Fes gives users the ability to develop their own world, story, and characters. Specific event conditions can be included that must be met for another event to occur, while also allowing you to customize your characters’ and enemies’ characteristics and parameters, specify flashy finishing moves, set collisions to create seemingly inaccessible “secret rooms”, and more.

We’ve included today’s RPG Maker Fes screenshots below. The system details, courtesy of the official website, are located below. 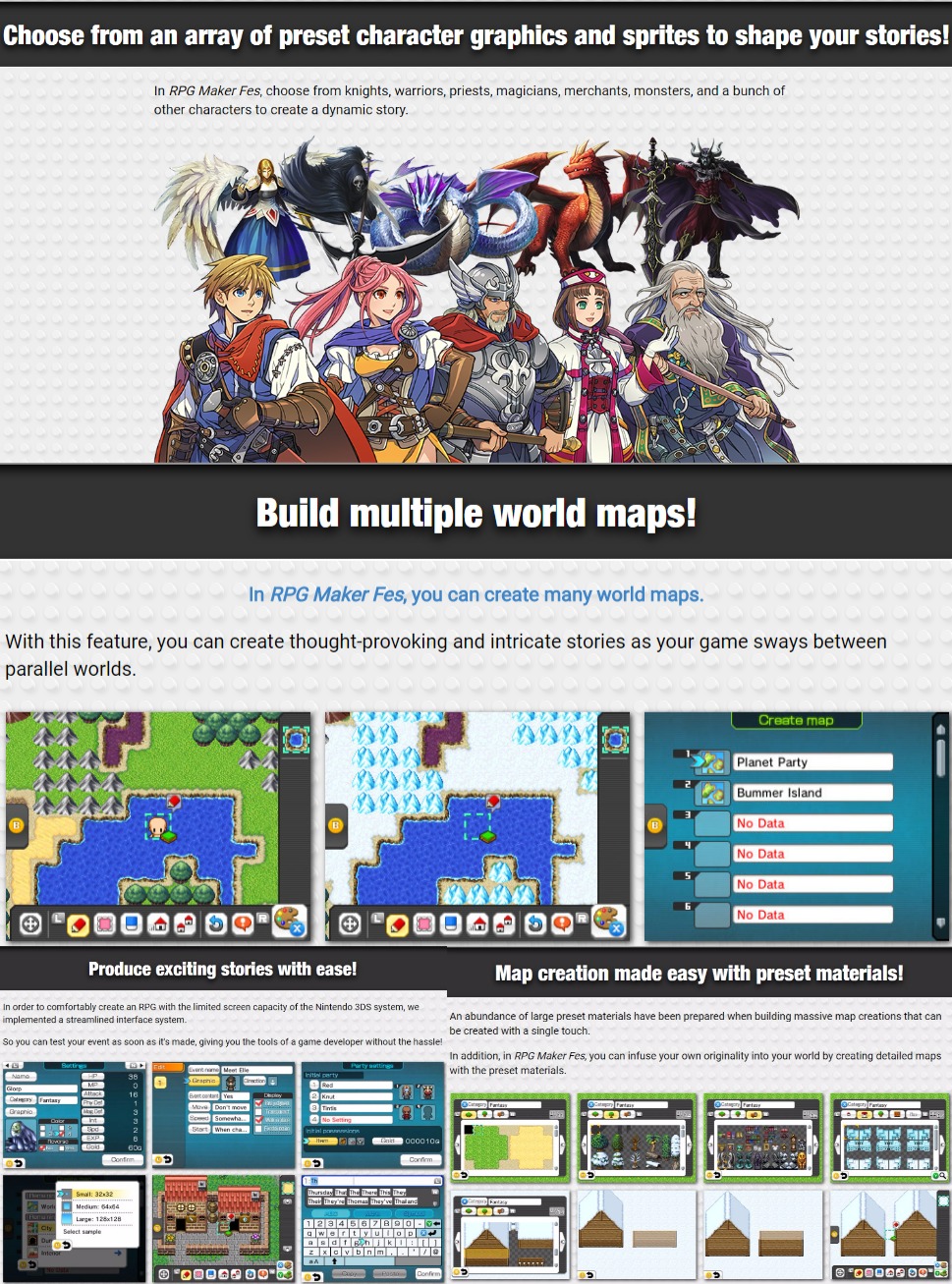 In RPG Maker Fes, you can create many world maps.

With this feature, you can create thought-provoking and intricate stories as your game sways between parallel worlds.

With a full database at your disposal, you can create your own full-scale RPG!

RPG Maker Fes comes available with many map items, so high-level, full-scale RPGs can be brought to reality. Customize the characters and monsters by easily configuring their attributes and resistances to various items, such as weapons, armor, and accessories.

With Character Settings, breathe life into your protagonist and other characters that will join their party.

Customize your characters’ graphics, name, job, and parameters. And with the character setting samples that are already available, feel free to either customize to your heart’s content, or conveniently select a preset character.

Raise your game’s quality by customizing all the enemy character parameters!
These customization settings are crucial to the quality of an RPG game!

Choose from a set of six attributes and nine resistances to spark players’ interest and help you create an awesome RPG that will have them hooked! In addition, you can also set variables such as HP to customize the battle system even more.

By customizing the attributes and resistances of your characters, you can create a dynamic battle system that adds even more appeal to your game.

Even customizing finishing moves, weapons, and armor are all made easy!

And of course, you can also set the items and special abilities for all characters in your party! Along with these game enhancing settings, you are able to select from an array of flashy animation effects that are essential for all battle scenes.

Utilize the Event List to liven up your story!

Make a variety of dynamic events by using the 10 different commands in Event List, such as Message Control, Movement Control, and Condition Control. And of course, you can also set events to change professions, which is a must-have in any RPG.

In RPG Maker Fes, it’s easy to set collisions, such as creating an entrance to another world from inside a house! With the help of collision judgments, a single tap can make the impossible possible by adding and deleting with the stylus.

With an SD card, you can make up to 16 RPGs at the same time!

Create magnificent RPG stories with large world maps so players can explore a variety of areas: snowy villages, desert towns, or even hidden ruins! To top it off, you can save up to 16 games, so you can create multiple RPGs at the same time.

In RPG Maker Fes, you can set many variables and switches to broaden the scope of your game, such as event conditions, and stats for monsters, special abilities, weapons, armor, and even items!

Choose from an array of preset character graphics and sprites to shape your stories!

In RPG Maker Fes, choose from knights, warriors, priests, magicians, merchants, monsters, and a bunch of other characters to create a dynamic story.

An abundance of large preset materials have been prepared when building massive map creations that can be created with a single touch.

In addition, in RPG Maker Fes, you can infuse your own originality into your world by creating detailed maps with the preset materials.

In order to comfortably create an RPG with the limited screen capacity of the Nintendo 3DS system, we implemented a streamlined interface system.

So you can tease your event as soon as it’s made, giving you the tools of a game developer without the hassle!