Sakurai elaborates on Pyra/Mythra in Super Smash Bros. Ultimate and why Rex isn’t a fighter 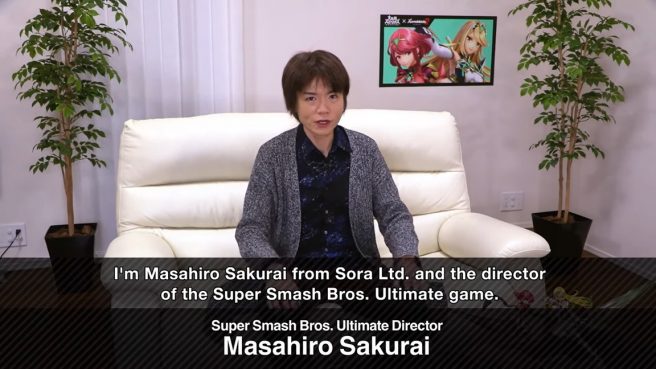 Last week, Pyra/Mythra was added to Super Smash Bros. Ultimate as the latest DLC character. The two-in-one fighter is the new representative from Xenoblade Chronicles 2 instead of Rex, who has the starring role.

You may recall that Smash Bros. director Masahiro Sakurai talked about the decision to feature Pyra/Mythra over Rex a bit during a presentation from earlier in the month. In his latest column in Famitsu though, he went into a bit of extra detail about the thought process behind it all.

We’ve now gone ahead and prepared a complete translation of Sakurai’s piece from the Japanese magazine. Continue on below to read it in full.

By the time this column is published, the latest DLC character for Super Smash Bros. Ultimate, Pyra and Mythra, will be available – I hope everyone is enjoying them! We’re in the process of rolling out a video on how to use Pyra/Mythra as well, so if you want to know how to use these characters, please check it out.

For those unfamiliar with combat in Xenoblade Chronicles 2, it’s an RPG battle system where characters work in pairs. One character, known as the Driver, acts as attacker and another character, the Blade, acts as the support. The world and systems in the game make it unlike anything else out there, so if you’re looking for something new to play, I highly recommend it.

When we learned we would be developing a character from Xenoblade Chronicles 2, my immediate thought was whether we could put Rex (the game’s protagonist) and Pyra (Rex’s Blade) on screen at the same time. We concluded that… well, it was impossible. The team tried, but we ultimately had no way of making it happen.

In Smash, there’s already a two-in-one character in the game – the Ice Climbers. The Ice Climbers simply mimic each other’s moves, however, and applying a design model to Rex and Pyra would oversimplify their designs. The amount of content needed to do those characters justice was too much, and there was far too much involved to get it done.

In a similar vein, we concluded having the characters work like Pokemon Trainer, where Pyra would serve as the Trainer in the background while Rex fought in battle, also wouldn’t work. It would make their design far too complicated and there would be too much involved to make it work. There was also the problem of how we would represent the pair’s Affinity in battle. More than anything, we thought that those designs were not the types of things that Xenoblade fans would want to see.

In the end, we couldn’t have Rex fighting on his own, and the idea of switching between Pyra and Mythra seemed like a much stronger character design. A Blade fighting on their own is a little different from the original game, but that point is far outweighed by the strengths of the design. Honestly, until I played the game, I thought that the Blade would fight on their own. If you saw a human and tiger pairing… well, the tiger is stronger right?

Our aim for DLC characters is for them to be unique, rather than just another character on the roster. Thanks to Pyra/Mythra’s Swap mechanic, we have two characters with different strengths and abilities, and different themes of power and speed respectively. Even though we settled on a single character, there was still a lot of work to be done. After all, these are two new characters that we had to ensure were properly balanced. Unlike the somewhat similar Zelda/Sheik pairings, the normal attacks of Pyra/Mythra were differentiated by attack speed and it’s their special attacks that are different. They were a lot of work, but I’m glad we were able to put such a brilliant character in the game. My thanks go out to all the staff who made it a reality.

As I said in the presentation, there’s no sense in arguing about which of the two characters is better. You can switch between them at any time, so you can use either character depending on the situation in a match. It’s no problem if you only want to focus on just one of the characters either. Everyone, I hope you’ll enjoy using Pyra and Mythra!

That leaves with only two more characters to go in Fighters Pass Vol. 2. We’ve already started development on the next character, so stay tuned!