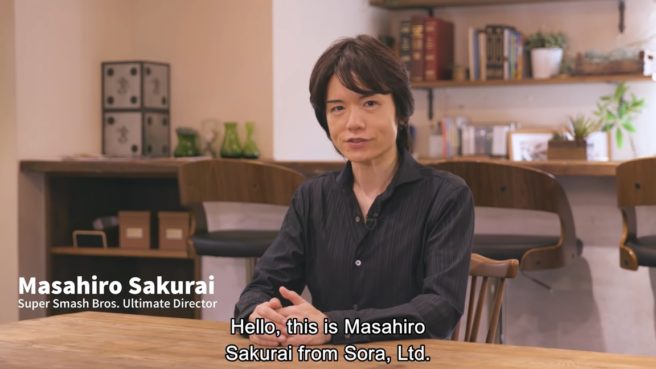 Nintendo Dream published a large interview with Super Smash Bros. Ultimate director Masahiro Sakurai about a month ago. The Japanese magazine was back at it again for its latest issue, catching up with the developer once more about various aspects concerning the Switch game. The two sides chatted in-depth about Sakurai’s health, how bosses and Spirits were chosen in Smash Bros. Ultimate, the new stages, and much more.

We’ve prepared a complete translation of the new interview, which you can find below. And if you missed it, you can catch up on the first part from last month’s issue here.

Thank you for joining us for part two of our interview on “Super Smash Bros. Ultimate”. The second half of this interview will actually be featured in our 300th issue of Nintendo Dream.

Sakurai: Wow, congratulations to you all!

We actually interviewed you for “Smash for” on our 250th issue. It seems like every time we have a commemorative number come around, you’re somehow a part of it.

This time is just pure luck. (laughs) We have covered the “Smash Bros.” series since our early days back when we were known as “64 Dream”; with that in mind, we’d like to ask you about the series’ history. Looking back on the first game in the series, how do you feel now?

Sakurai: Hmm… That’s a tough one. I guess what comes to mind is how right after we finished the first “Smash Bros.” game, I was frantic to figure out how in the world I was going to convey the enjoyment of the game to players. And now look at it – the newest game sold 5 million copies in just the first week. I never thought it would turn into this successful of a series. It’s become sort of like my life’s work.

Sakurai: At the same time, I don’t see this as a series that I’ve continued to work on out of necessity, nor do I think it’s a series that I can continue to make forever. The new game’s subtitle is “Special”*, but I feel like it’s that way with every entry.

*NOTE: “Special” is the subtitle in Japanese instead of “Ultimate”.

Every Smash game is special, right?

Sakurai: Yes, because if you say, “I’ll do this or that on the next game,” then you’ll just drive yourself crazy. Sorry, let’s not get off track here. Anyway, we created “Smash Ultimate” with a sense of summarizing the series’ history all in one. Some of them were already in the games, but we used the stages from the first game on Nintendo 64 as is. And while we’ve increased the quality of how they look and feel, the 12 base characters from the original are still in the game, too. We’ve had a series of struggles since the very beginning, for sure, but I think we forget about them quickly. Even though we regret leaving some things undone back then, still so many people have played these games. And I think we can be pleased with that result.

So once you realize you’re satisfied with the results, you can forget about the struggles. Is that right?

Sakurai: No. If you wonder whether you’re satisfied or not, then you’re never really satisfied. You can’t keep on reflecting on the negatives and then feel like your struggles paid off. The fact that so many people have played these games, I think that makes me feel like I can forget like those struggles ever existed.

So you keep the things that you want to reflect on, but you get rid of the sense of struggle.

Sakurai: I still have a lot of serious thoughts on my mind, however I think “Smash Ultimate” is a success unlike anything thus far. As I said in the very beginning of our interview (last month’s issue), I’m extremely grateful to all the fans.

Among these struggles, I would like to ask specifically: how did you take care of your health during development of “Smash Ultimate”?

Sakurai: I made some changes from what I used to do compared to now. For example, as a principle, I always left the office by 10 PM, no matter what. Many companies are discouraging extreme overtime these days, too.

It seems like every company in the video game industry is following suit with that method of management.

Sakurai: If I had to say, I’m rather close with the companies I’m hired out by, so I don’t think I really need any deadlines. Anyway, that’s probably been the biggest change in structure for me. And if I have time, I can work a bit on other games, too.

So you didn’t have any stomach issues or anything?

Sakurai: Well, actually… I still had a lot of stomach problems.

So what do you do when that sort of thing happens? I actually had a case of acute gastroenteritis recently.

Sakurai: That sounds rough. When you’ve got symptoms like food poisoning, you definitely have to go to the hospital, right? I’ve had that situation once or twice before during development. It was like I got food poisoning from some oysters that I didn’t eat.

Even though you hadn’t eaten any. (laughs)

Sakurai: It was like my food had come into contact with them or something. But I cook my food thoroughly… Why did I get sick?

Uh, so… Do you take some time off when that happens?

Sakurai: No, I don’t. I just get an IV drip and go to work like normal.

Sakurai: I guess I’m a hard worker? (wry laughter) I’m a freelancer, so I don’t have any strict rules on my time. As long as I can complete the game, I could show up to the office once per week and I think it’d be within the realm of forgiveness. But instead I make sure I come to work every day and write proper daily reports and such. I’m always working, but there’s a lot of things that keep me in good spirits!

That reminds me of when you said, “I wonder if I’ll ever get to take a break.” (laughs)

Sakurai: Oh, but I did take some vacation this year for three days (December 22nd through 24th). I don’t think I can take a lot of time off around the holidays, though. We’re still developing our DLC, so my staff would have to handle my share of the work. We’re releasing Joker soon, and they wouldn’t be able to consult with me on him.

I’m sure there were a great deal of recording sessions with all the voice actors in the game, but were there any particular moments of note during the process?

Sakurai: There were tons and tons of notable experiences! But I can’t really share what went on. (laughs) But let’s say that the whole recording experience was very pleasant and went off without a hitch.

And you even recorded new voiceovers for fighters from past entries, is that right?

Sakurai: Yes. For example, with Ike, we wanted to have two different voices to represent his character in “Fire Emblem: Path of Radiance” and “Fire Emblem: Radiant Dawn”. And then with Marth, we’ve been using the same voiceover for him since “Melee”, but we did new recordings for him on this entry. Up until now, the English versions of the games have used Hikaru Midorikawa’s voice, but this time we decided to record new voiceovers with his English actor. But of course, English-speakers can still switch the voice to Japanese and enjoy Midorikawa’s updated performance as Marth if they like.

Sakurai: Our vocal recordings can often be completed in as little as one hour. Although it’s such a brief amount of time, even now there are still voice actors who have fond memories of recording with us as far back as “Melee”. It’s really motivating for me to hear that from them.

Sakurai: If they’re a voice actor who knows “Smash Bros.”, it’s easy to talk with them. And this time around, we had a lot of talented individuals who fell into that category.

You could say, “Everyone’s here!” for the voice actors, too.

Sakurai: That’s definitely true. We even have famous voice actors for the Mii fighters (laughs). We had actors who were already voicing a different main character, and thought, “Well, let’s just have them do one more.”