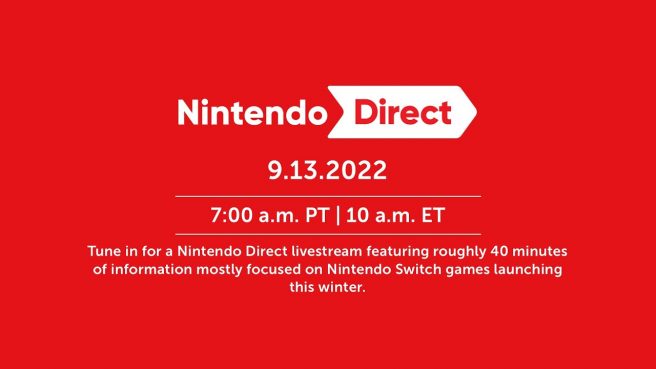 A big September 2022 Nintendo Direct is upon us, and we have both a live stream and live blog ready to go. The fun begins at 7 AM PT / 10 AM ET / 3 PM in the UK / 4 PM in Europe. Note that there will not be a live stream in the UK, but it will go up as a video-on-demand following the broadcast, any viewers in the region can simply watch the North American counterpart.

Today’s Nintendo Direct will last about 40 minutes. Expect it to mainly focus on games launching on Switch this winter.

Here’s where you can watch the September 2022 Nintendo Direct live stream:

The Nintendo Direct has now begun, with Fire Emblem on screen with references to the Binding Blade and the Fel Dragon. Various characters are shown from past games, and the title is shown to be Fire Emblem ENGAGE.

Fire Emblem Engage is a standard turn-based tactical RPG. Players seem to be able to pair off characters into teams as a new mechanic. The main character is charged with bringing peace to the realm of Elias. Release date 1.20.2023 – A special Divine Edition will be available.

Front Mission Remake detailed, shows models and UI, introduces colliseum. Shows Front Mission 2 is included. Available this November, but FM2 will be next year, and Front Mission 3 is announced.

Story of Seasons: A Wonderful Life – not sure if remake. Many returning characters, children and aging are confirmed.

Splatfest detailed for this month, updates announced for Splatoon 3.

Fae Farm, a simulation RPG with magical spells allows you to grow crops and explore dungeons, fighting monsters on the way. This fairytale farmstead allows for online and local multiplayer, as well as Animal-Crossing like interior decorating.

Mario + Rabbids: Sparks of Hope details shown about the various Sparks and how they can turn the tide of battle. Gold Edition detailed.

Shigeru Miyamoto is now on screen. Super Mario movie is mentioned as launching this spring. California Super Nintendo World mentioned. Pikmin Bloom shown. Introduces the game showing the player using GPS like Pokemon GO, goes into basics of game and how to play.

Harvestella shown. Demo available later today in the eShop. Save data to be transferable. Full game 11.4

Bayonetta 3 – Homonculi enemies shown. Luka, Jean, and Viola shown to join in. 10.28. Preorders open now. Trailer will be on YouTube after this presentation.

Resident Evil: Biohazard, 2, and 3 will also be coming to Cloud.

Tales of Symphonia Remastered revealed for 2023.

Kirby’s Return to Dream Land DELUXE – Mecha copy ability debut. Local play up to 4 players on same system. Subgames available. Up to 4 players for these, as well. 2.24.2023 release

Last announcement: The Legend of Zelda: Tears of the Kingdom launches 5.12.2023