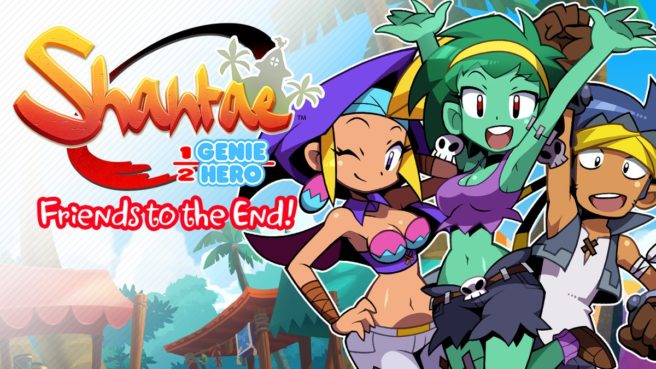 The new Friends to the End expansion for Shantae: Half-Genie Hero will launch on December 12, WayForward has announced. This applies to the Switch version and North American Wii U release. In Europe, the DLC is slated for the following week in Europe.

Friends to the End is the final final piece of the Shantae: Half-Genie Hero storyline. Sky, Bolo, and Rottytops are featured as new playable characters.

We have more on Friends to the End for below, along with the trailer from yesterday for those who missed it.

When Shantae falls prey to dark magic, it’s up to Shantae’s BFFs Sky, Bolo, and Rottytops to save her from a Nightmare Realm of her own imagining! Conquer remixed locales (and new challenge levels) using Bolo’s grapple claw, Sky’s egg-toss, and Rottytops’ brain-munching to beat bad guys, solve all-new puzzles, and rescue the half-genie hero. It’s all possible with the power of friendship!

Enter the Nightmare Realm and experience the final piece of the Shantae story!
Solve puzzles and battle enemies by swapping freely between Sky, Bolo, or Rottytops!
Glide, toss eggs, and hatch helpful bird buddies as Sky!
Grapple and swing through the air as Bolo!
Fling your head and eat brains to regenerate health as Rottytops!
Level up! Collect Gems to increase each heroes’ potential!
Unlock different endings by recovering lost Dream Squids
Enjoy fan-favorite musical selections from Shantae’s past, included with this mode!