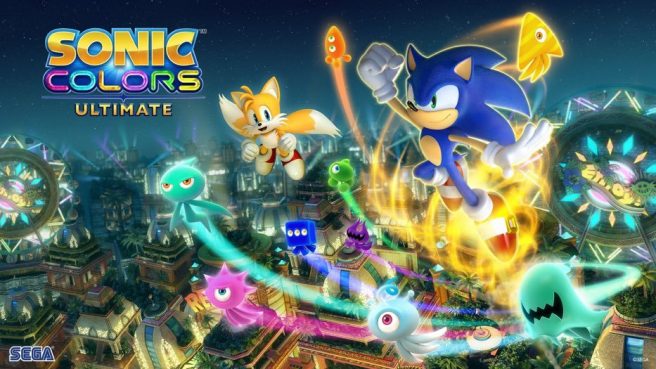 Following the recent announcement of Sonic Colors: Ultimate, Japanese magazine Famitsu shared an interview with a couple of key people behind the franchise. Creative officer Takashi Iizuka and creative director Kazuyuki Hoshino both chatted with the magazine.

Iizuka spoke in depth about Sonic Colors: Ultimate, discussing why the Wii game was brought back, the new Tails Save gameplay system, and more. We also get to hear a bit from Iizuka and Hoshino about the series’ 30th anniversary.

How did you come up with the idea for the project?

Iizuka: Before we talk about the game, let me talk about where the Sonic brand has stood for the last few years. There are fans of the pixel art style as seen in Sonic Mania, passionate fans of Sonic Forces as well as fans of Sonic games that fall into other genres, like Team Sonic Racing. We’re actively taking steps to make different types of players into Sonic fans. On top of that, the movie that came out last February was a bigger hit than SEGA and our partner Paramount Pictures imagined, birthing a new type of Sonic fan – one that came to know the character from the movie, which grew the Sonic fanbase even more. Of the existing fans, there are probably a good number in their 20s and 30s who remember the Sonic X anime, but the success of the new movie opened Sonic to young kids and their parents as well – it made Sonic a lot  more recognizable.

Iizuka: According to the results of our overseas research, many people watched the movie with their families, and a good number of viewers came to like Sonic because of his speed and appearance in the film. For people who got introduced to Sonic through the movie, we wanted to make a game we could recommend to first time players of the series.

So you want people who are unfamiliar with Sonic to play the game?

Iizuka: Sonic Colors sold a total of 4 million copies across the DS and Wii versions, but there’s no way to play the game on the current generation of consoles. We took a big step forward with the systems in the game, so between that and other improvements we’ve made, we hope people who played the original will find reason to play too.

Iizuka: We’ve added a lot to the original 2010 release. The original Sonic Colors followed on from Sonic Unleashed, but this time we wanted it to be enjoyable for people without that background knowledge and added features that make things a little easier for beginners. We changed so much it gives the ultimate meaning to the word ‘Ultimate’.

Can you talk about any specific changes?

Iizuka: TVs and consoles are a lot more capable, and we’ve upped the resolution to HD to match that, but the biggest change is it’s no longer possible to reach a game over. We don’t think that has a place in games today, so you can retry sections of the game as many times as you like.

So it’s quite beginner friendly.

Iizuka: It’s still a platformer, so there are still going to be moments where you might miss a jump and fall, which is why we added the ‘Tails Save’ system to help players out. As the name suggests, even if you fall, Tails will come to the rescue and pull you back to safety. We added this system so new players can enjoy the game without getting frustrated.

Could you once again explain the game’s unique ‘Color Power’ system?

Iizuka: This was the ‘big step’ I mentioned earlier. Before Colors, Sonic was about running fast, jumping, and taking out enemies. Sonic Colors was the first time we gave Sonic a new ability. Through taking in the powers of the colorful Wisps, Sonic can transform into things like a drill or rocket, and players will get to experience some real power with all the different Wisp abilities.

There’ll also be a brand-new Wisp.

Iizuka: Right, in addition to the Wisps from the original game, we added the Jade Wisp from Team Sonic Racing. The Jade Wisp will allow Sonic to turn into a translucent ghost and gain the ability to pass through walls.

Iizuka: They do. There are items and challenges scattered throughout each level where players must experiment with the Wisps to hunt them down. We’ve also added to existing levels to compensate for the addition of the Jade Wisp. In the past, additional paths were determined solely by the Wisps Sonic had in a level, but the addition of the Jade Wisp opens some flexibility in how players solve those challenges.

This year is Sonic’s 30th anniversary. What do you have planned for it?

Hoshino: We’re planning a live orchestra concert and several collaborations with other games, so stay tuned for more information on that. I don’t think we’ll be able to meet in person to celebrate the anniversary, so to commemorate the series in place of that, please check out Famitsu as well as the official Sonic Channel website we’re working on.

Finally, what are your thoughts on the 30th anniversary?

Iizuka: Looking back over the last 30 years, we’ve gone from pixel art to a fully-3D rendered Sonic, and landed in a place where modern and classic Sonic can coexist in games across many different genres. For the 10th and 20th anniversaries, we held events for fans of the games, but for the 30th anniversary, we would like to do something that involves a wider range of Sonic fans.

Hoshino: I’d love to collaborate with the Sonic team in the US; Our main goal is to increase the number of Sonic fans in Japan so that we can keep up with the fans overseas. Sonic the Hedgehog 2 (movie) is also in the works, so stay tuned!

Big thanks to Jarop and centurionnugget for their assistance with this translation.