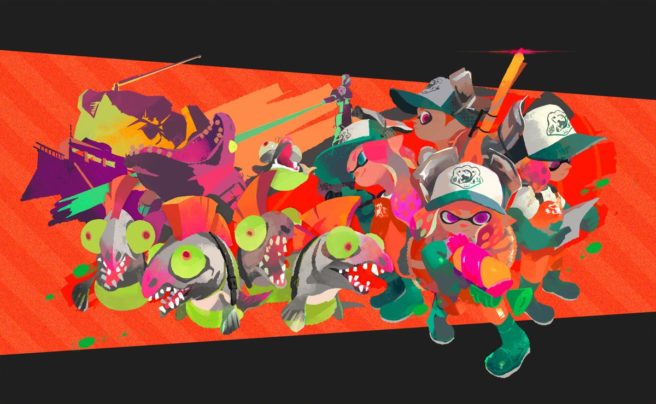 Interviews coming out of E3 continue to roll out from E3. The latest one is from Glixel, who spoke with Splatoon 2 producer Hisashi Nogami and programming director Shintaro Sato. The two weighed in on topics such as the game’s competitive nature and Salmon Run.

As usual, we’ve highlighted some of the noteworthy excerpts below. Head on over here for the full interview.

On whether competition was always the core inspiration for Splatoon…

Hisashi Nogami: Well, you know, competition is really important to Splatoon 2, and it’s a core element of the game. Our idea of the competitive game that we’re making is that we first offer a set of content to the players and give them the tools for play – the stages and the weapons – and then the players themselves determine what sort of play they’re going to create using those tools. We watch that and keep an eye on it, and then make adjustments if necessary. We have a back and forth with the community.

We take a lot of care to ensure that equality and fairness – making sure that players perceive that they’re all on the same fair playing field – is very important. And, you know, as we’re combining all of these elements into this competitive experience, if we do it with an eye to fairness, we’ll only widen that circle of people who can jump in and enjoy it.

One style of making games at Nintendo is what you can see with Super Mario Odyssey – you have a set of content that is made for a player to enjoy. That’s wha we have a lot of respect for and feels very important. However, the type of play experience that we’re creating with Splatoon is something that we view more as a playground. You know, players are on the playground, and it’s a bit of a conversation, a back and forth, with the content we create and the reactions from the players. And that’s a choice that we have to make between the Odyssey style of game creation and the competitive style of game we’re making.

Hisashi Nogami: As soon as we knew that Splatoon 2 was going to be coming out on the Nintendo Switch, we immediately started thinking about the fact that it’s a console you can play at home, docked in front of a television, but also that you can take with you on the go. We felt that this dual-purpose console concept was something that fit well with the activity that you were already doing in Splatoon. So – at home in front of your TV you’re working on your online play, and then you can also take the game with you, gather together with friends, and continue that multiplayer experience in a local setting. We also wanted to give people who were getting together locally another option – another mode with a smaller number of players than the usual eight-player multiplayer experience – and that is sort of when we came up with Salmon Run. Our idea was that as few as just two people could get together and – without having to worry about battling a larger number of people – cooperate together and have a goal that they were gonna try and achieve.

Hisashi Nogami: Well, you know, we’ve tried to design the mode in such a way that even in an online setting it won’t be necessary to have voice chat. To compensate we’ve added in a series of signals players will need to send to each other to indicate the locations of enemies. For example, as soon as the boss salmon appears, whoever’s closest starts banging on that “Come on” button to call everybody over to defeat it quickly. If you get taken down, that command will change to “Help” and you hit that and players can see your location and know that they need to come and back you up.

Shintaro Sato: I think it’s important to underline that we’ve made Salmon Run a mode where direct communication isn’t necessary. However, for those teams that want to challenge the higher difficulty levels, or people who are already friends or know each other, voice chat will be available.

Hisashi Nogami: There are two ways to match up and play Salmon Run online. One is where you’re just by yourself and you jump in and you’ll be placed with three other random players. The other way is to group up with either one other friend to make a pair or three people to make a group ahead of time, and then go in and challenge the mode. Of course, that means if you go in as two or three players, the remaining players will be made up of people you don’t know. Whatever the size of your group – two, three, or four – if you’re grouped up as friends you’ll be able to use voice chat. You won’t be able to voice chat with those remaining players who aren’t a part of your friend group.

Hisashi Nogami: Well, I think “esports” is a term that actually encapsulates a lot of different meanings. You know, it could be something as simple as friends getting together to play a tournament online or it could be a tournament where prizes are involved, where sponsors jump in and you actually have pro game players involved. That said, being an esport wasn’t something that we were ever really considering or aiming for when developing the game. We want to strongly encourage that sense of competition among players – we really want to make a game for players who are seriously interested in competition. After the release of Splatoon 1 we were definitely aware of a community that rose up, people who put together serious teams that were interested in a competitive tournament. And so we’ve included some systems in Splatoon 2 that acknowledge and encourage that type of competitive play among that more serious group of players.

Shintaro Sato: We definitely recommend getting eight people together in a local wireless setting, and you can play to your heart’s content that way. But for those players that want to make sure that there is no lag we’ve also included the ability to connect eight Nintendo Switches via LAN play.

We also added a spectator mode so that players can have someone who is controlling the camera during their match from a variety of different perspectives, and then that match play can be recorded, potentially, and posted online to be shared with the wider community.

There’s also a new mode in Splatoon 2 called League Battle. This will be a mode that players can play either in groups of two or four, and it will present you with a two-hour period in which your group competes with other groups to see how many points you can earn. Because the results of that League Battle play will be displayed in a ranking at the end of every two-hour period, we can give players goals to strive for, and hope to encourage them to keep competing and pushing.

Hisashi Nogami: And, you know, hopefully even players who aren’t participating in that top level will find these developments interesting and enjoy viewing them from the outside.

So, part of your question was whether we had been thinking about esports or competitive gaming from the time of Splatoon 1 – well, while we had the confidence that we were making a game that would answer the needs of the more competitive player, we also realized that if we were going to have competitive play, it would need to be supported by a great community. We’re really grateful that we’ve had a good response from that community, and after seeing it grow, that gave us the confidence we needed to add these additional elements that encourage competitive play in Splatoon 2.

And I think the World Splatoon Invitational that we held at E3 was basically the result and evidence of the community engagement that we’ve been so grateful to get. So, with all of the support that we’ve gotten from those players, that serves as fuel for us going forward, and encourages us to make sure we can answer the needs that they have.