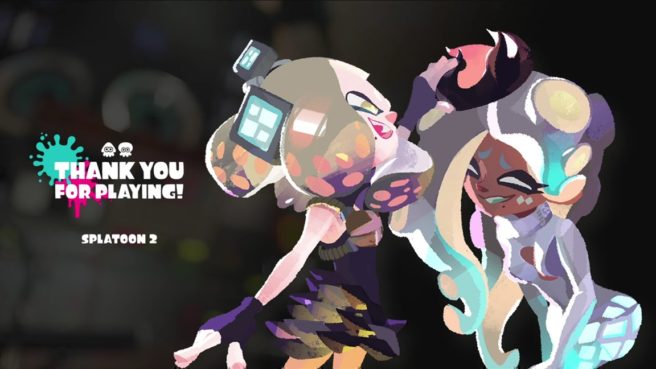 In a recent issue of Famitsu, a big interview was published with Splatoon 2 producer Hisashi Nogami. Nogami reflected on the game’s second year of updates and activity, the final Splatfest (including why there wasn’t a Pearl vs. Marina showdown), what lies ahead for the future, and more.

We’ve now prepared a full translation of the interview. Continue on below for the full discussion between Famitsu and Nogami.

Moving with the Trends

What were your impressions since the first anniversary?

Nogami: Well that all came to an end with the Squid vs. Octopus Splatfest. Aside from that there was also the Octo Expansion. Once that came out, the timeframe for the Inkling world began to gradually evolve. Because of that the events and updates became a little different to what we had done up until then. From a development standpoint, in contrast to that first year where the things we had to do were always piling up, in the second year we were able to try out a lot of new things.

Did you decide on the plan for the second year after looking at player trends?

Really?! I assumed they were designed as a set.

Nogami: Actually it was more a case of the Kensa Collection being an attempt at the same sort of thing that Sheldon’s Picks were for the last game. We brought over some weapons that didn’t make into that first game and also introduced new sub weapons and specials for the weapons we introduced in 2, to add a bit of variety. Because the Sheldon’s Picks came so much later, they were a lot more effort (wry laugh).

The Kensa Collection is a collaboration with the Toni Kensa brand. Why did you choose that one in particular?

Nogami: Since the collections in the first game were so colorful, we decided to go with a black and white base palette for this one. And, since we were going with monochrome, we went with Toni Kensa.

You mentioned the new specials and sub weapons. Were they also not in the original plan?

Nogami: That’s right. We felt that just adding new weapons alone would not have been enough, so we started also thinking about adding the sub weapons and specials.

Nogami: Now that you mention it that could be the case. The specials were originally chosen by how useful they would be in different situations, and then put together from that. So while the Booyah Bomb can be give a tactical advantage in certain circumstances, the aim of something like the Ultra Stamp is simply to thrown an area into disarray.

Why did you make team assistance necessary for the Booyah Bomb?

Nogami: Since specials are often used by individuals, we wanted to create one that encouraged players to think about teamwork. I think when friends are online as a team they have an idea of what specials their teammates are using, but this was a way for even those matched up randomly to be aware of what was going on with their teammates.

The move received a pretty quick patch. Was it difficult to get it just right?

Nogami: Whenever we release a special views are often polarized between those saying it is too powerful and those saying it is too weak. But when someone posts online something like, “It’s really powerful if you use it this way!”, the word travels quick and people catch on. So then that makes it easier for us to know how we can fix it in a way that makes it powerful when used correctly.

To OP or not to OP

I feel like the patches have become a lot more focused now on smaller tweaks. Do you feel that’s because you are getting close to an ideal balance?

Nogami: True, the scale of the updates has definitely become smaller and we haven’t drastically changed any of the weapons. But that’s not because we have reached some sort of ideal balance. It’s not like we are no longer able to decide on weapon usage or the way certain weapons work, but that sort of thing doesn’t necessarily lead to enjoyment for the players. Now we are a lot more mindful of how we can change things so that the game remains fun. It’s just that the scale of those changes has become smaller than it was before. So right now we are making our decisions not only on how to make all those weapons usable for beginners but also how to make it so that all players not used to these weapons can learn to use them more efficiently and to their advantage.

Nogami: That one definitely isn’t the easiest to use! (laughs) Walking your own path is difficult, but when you see how accomplished someone else can be it kind of opens up the way for other players to try and reach that point.

Even though I guess no-one wants to just copy the skilled players.

Nogami: And it’s also not like we are against a certain weapon becoming popular, but we would like to avoid it becoming overwhelmingly so. At the end of the day we want everyone to enjoy the game, so having weapons that have their own distinctive fun points might be that ideal balance you were talking about. But then again, having loads of weapons to choose from alone doesn’t necessarily lead to balance…

And it’s also possible that a weapon becomes so popular that other players begin to criticize it, and then that weapon will also lose its appeal for the players using it…

Nogami: And even though we want to avoid one weapon becoming an overwhelming favorite, I don’t think it’s always necessary to change the strong points of each. We’re always wary of change for the sake of change, but the imagination of the players spans much farther than ours, so sometimes it’s a tricky process.

In version 4.3 there were a lot of big changes to the main abilities of the Power Gear.

Nogami: That was also something we weren’t originally intending to do. But after thinking about the continued enjoyment of the players we decided to add it in.

It’s a bit of a game changer.

Nogami: The concept was threefold: make the weapon merits stronger, offset weaknesses and allow for new ways to play. So players who want to bring a certain attribute of the weapon to the fore can use gear in order to do that. We came up with more gear because we wanted the player to have more to choose from.

What sort of balancing are you going to do from the second anniversary onwards?

Nogami: From now on we’ll mainly be balancing the additional content we have added. The updates in future will mainly be for that. It’s not like we have a schedule, so it will be more a case of updates only coming out as and when they are needed.

The trailer for 4.0 felt a lot like an anime opening – and you even had all the sponsors listed at the end, just like an anime! (laughs)

Nogami: It seems the team thought of that as like the opening theme of a second series of a show. As I said before, all the stuff up to the end of Ver. 3.0 was already laid out, whereas 4.0 onwards had lots of parts that weren’t decided. That’s why that trailer became like the introduction of a second era of cool.

You have also introduced Diss-Pair and Sashi-Mori as new bands. Is this the result of the conflict between the Inklings and Octolings?

Nogami: Two years on this is a world of Inklings living side by side with the Octolings. There are even Octoling fashion items available in the shop.

Is there still any conflict left between the two?

Nogami: Seems not, since the Inklings haven’t even noticed really. Well, aside from maybe being like, “Is it just me, dude, or are there like totally more people with curly hair around?”