Posted on December 6, 2021 by Brian(@NE_Brian) in Switch eShop, Videos 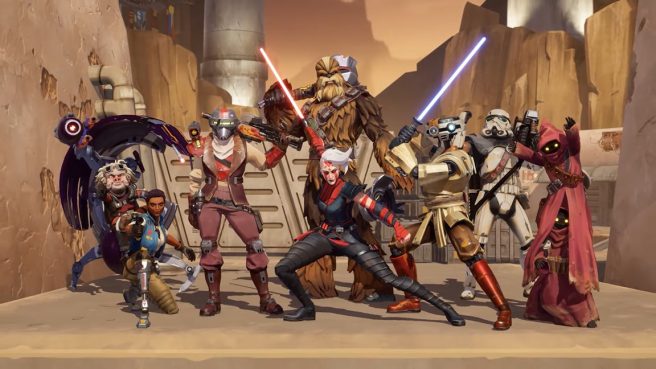 For more on the title, have a look at the following overview:

Following the end of the Galactic Civil War, the bright lights of The Arena burst into life and offer new heroes a platform to shine across the galaxy. Located deep in the Outer Rim on the planet of Vespaara and broadcast far and wide on the HoloNet, the stories and legends of battles that have defined galactic history are brought to life to entertain audiences and create champions seeking fame and fortune in this new gladiatorial spectacle.

The Arena brings together all-new, unique Hunters from across the Star Wars galaxy each with larger-than-life personas, rich undiscovered pasts and ability sets that make them formidable combatants.

Gear up for battle choosing from a roster of new characters, including nefarious bounty hunters, heroes of the Rebellion, Imperial stormtroopers, and everything in between. Outclass opponents by mastering advanced abilities, skills and strategies while fighting it out in intense 4v4 third-person combat and dominating opponents on the road to fame in The Arena.

Customize each Hunter by collecting and equipping them with fun and unique costumes, animations, and weapon appearances, making for an impressive competitor that stands out on the battlefield and is ready to challenge for glory.

Dazzle The Arena’s crowd, competing across multiple PVP game modes; within Escort, defense and attack skills are crucial as the team need to work together to safely escort the payload before their enemies defeat them. In Control, two teams battle it out to defeat one another and take control of the central objective area until the time runs out. Each battlefield set in The Grand Arena on Vespaara evokes iconic Star Wars locales such as Tatooine, Hoth and Endor.

Star Wars: Hunters was previously planned for this year, but was delayed to 2022 a few months ago. We’ll let you know when we have a final release date.