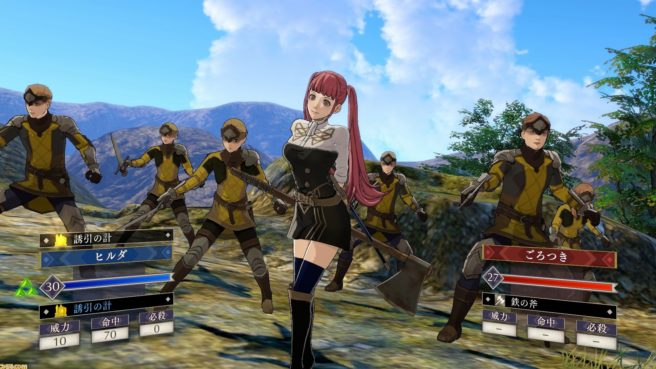 Along with featuring the game in this week’s issue, Famitsu posted an online article for Tons of Fire Emblem: Three Houses. It shares plenty of details and screenshots regarding crests, battalions, classes, academy gameplay, and more.

History of the Crests

– Some characters bear “crests” passed down by their ancestors
– The crests play a major role in influencing one’s social standing
– Ex: the Adrestian Empire’s imperial throne has been passed down for generations to those with the crest of Seiros
– In addition, crests may unlock talents such as superior physical or magical ability
– The protagonist possesses a crest
– This same crest appears in various places, like on Sothis’s clothes, the king with the golden blade in the first trailer, etc
– The name and properties of this crest are a complete mystery
– It’s even called “Crest of ???” in the game

– Skills are an important part of a character’s personality and growth
– When set, they have a particular effect during battle
– 3 skill types: personal, class, professor
– Personal skills: Innate skills that each character has at the start; can’t be removed and there’s only one for each character
– Class skills: Innate skills for each class; granted to that class only and disappear once you change class
– Professor skills: These are learned skills according to the character’s professor levels (in Sword, Lance, Axe, Authority, etc.); can be customized and are independent of class

– Personal: Songstress – At the start of each turn, restores adjacent allies’ HP by 10%

– Personal: Liege’s Shield – If user waits without acting, Defence +4 for one turn

– A sarcastic guy who affectionately calls his childhood buddy Dimitri a “boar”
– He trained to hone his swordsmanship
– Personal: Solitary Wolf – When a battalion is not deployed or when battalion health is zero, damage dealt +5
Crest: Crest of Fraldarius – A crest said to have belonged to Fraldarius of Fódlan’s Ten Greats

– Personal: Prestigious Noble – When a battalion is deployed, damage dealt +2
– Crest: Minor Crest of Gloucester – A minor crest said to have belonged to Gloucester of Fódlan’s Ten Greats

– The only daughter from a duke’s family; she’s a lady who’s good at acting cute
– Adores fashionable and glamorous things
– Personal: Plead – When entering battle with an adjacent male ally, damage dealt +3
– Crest: Minor Crest of Goneril – A minor crest said to have belonged to Goneril of Fódlan’s Ten Greats

– The Ten Greats appear to be the legendary heroes from Fódlan’s past
– They were first mentioned in the description of the Noble class
– Presumably there are ten of them; we currently know of five: Blaiddyd, Riegan, Fraldarius, Gloucester and Goneril
– These five names also match with places on the world map.
– So far, the Ten Greats and Seiros only account for 11 of the 21 crests shown on the Goddess’s mural

– Gambits can be used by characters with battalions deployed
– They can deal damage to enemies, but also provide supportive effects allowing for various strategies
– When using a Gambit, enemies cannot counter-attack and multiple enemies can be targeted at the same time
– Their uses are limited

– Hits one enemy on the left and right of the targeted foe
– This Gambit causes the “Distress” status (reduces all stats by 10%, prevents movement, stat boosts from battalions and Gambits)
– Can be used at least twice

– For one turn, increases the movement of allies by 5
– Targets an adjacent ally and seems to apply the effect to all allies with a 2 tile radius of the target (or maybe just a triangle with the user at the centre and the target at the edge)
– Can be used at least twice

– Targets an adjacent foe and moves them to the tile behind the user
– Also creates a special tile where the foe used to be, which triggers the same effect
– Also seems to inflict “Distress” on the foe
– Can be used at least twice

– New type of weapon that is based on fist-fighting
– Gauntlets allow the user to deal consecutive attacks, similar to Brave weapons
– If the character’s Attack Speed is 4 or higher than the opponent’s, a follow-up attack will be performed
– If a Gauntlet is equipped, you can deal 4 hits in one battle
– Gauntlets cannot be equipped when riding on a horse or pegasus

– Mercenaries who fulfill their objective
– Excel in strength and speed
– As a mid-tier class, Mercenaries specialize in swords and axes similar to Heroes in previous games
– The featured character is Felix

– Riders who ride in battle on horseback
– After fighting, they can move again
– Class skill: Canto – After performing an action, user can use their leftover movement (from Path of Radiance)

– An axe-fighter with exceptional strength
– With their excellent vitality, they fare well on the front-lines
– The Brigand has inherited the axe and gauntlet specialties from the Fighter class

– A gauntlet-wielder who fights at close-combat
– They’re adept at swift attacks
– Class skill: Barehanded Battle – User can fight without a weapon equipped
– Only males can be Fistfighters

– A practitioner of black magic
– Good at fighting foes with high defense
– This class can equip magic.
– Class skill: Fire – Enables the use of Fire; if already learned, doubles the number of uses

– A practitioner of dark magic
– Good at fighting foes with high defense
– This class can equip magic
– Class skill: Miasma△ – Enables the use of Miasma△; if already learned, doubles the number of uses
– Class skill: Hex – Reduces Avoid of adjacent foes by 20
– Dark Mage is apparently locked to males

– The game is divided into two parts: battles and academy
– In the academy part, you can interact with students and teach them to boost their abilities
– You can also check the in-game calendar to plan how to spend your days

– During weekdays, there will be lessons
– You can partake in Tutoring, Auto-Tutor, Group Task and Set Goals
– These are all options in the Lesson Plan menu
– During weekends, you can enjoy some free time
– You can take a Stroll, Class, Rest, Venture and Examination
– The latter allows you to class-change
– During the end of a season, there will be a Field Study
– Strolling lets you wander the academy grounds
– You can interact with the inhabitants and trigger quests
– Near the bottom-right corner of the screen are button prompts to open the Rankings (- button), Menu (X button) and Check Schedule (Left and Right on D-Pad)
– In Fódlan, there are 12 seasons (months) in a year, just like in real life
– Each season equates to one chapter or act
– You’ll go through the calendar for each season, until the last day and then that current season and chapter will end

– During tutoring, you can teach your students and enhance their professor levels (Sword, Lance Axe, Authority etc.)
– You can Auto-Tutor too if you don’t want to strain your head muscles
– If you carefully teach your students, you can better shape them to their needs
– Instructor Gauge: This is the green gauge and the number displayed near the top of the screen; shows how many students can be tutored in one week; as your Instructor Level increases, this will go up
– Motivation: This is shown by the gauge with the smiley faces; the higher the student’s motivation, the more times they can be tutored, allowing for increased growth

– In addition to the Instructor Gauge, there’s a Stroll Gauge and Venture Gauge as well
– As the protagonist’s “Instructor Level” increases, the amount of times you can do things will increase and you’ll be able to get more out of your week
– Your Instructor Level can be improved by teaching, socializing and taking strolls etc
– If you want your students to become their best, your growth as a teacher will be essential
– Even dining with your students can improve your Instructor Level

– To smoothly develop your students’ talents, you’ll want to keep their motivation high
– Motivation can be increased by interacting with the protagonist and during battle
– Motivating students is essential for any good teacher
– Students will often ask you questions
– Answering questions also increases your Instructor Level
– When it reaches D, your Stroll and Instructor Gauges will both go up

– During individual tutoring, you can pick a particular professor level to raise for each student
– By raising these levels, students can learn new skills and wield better weapons
– For the most part, equipped weapons do not change when class-changing, so you may want to focus on a main weapon
– It seems magic is restricted by class
– “Perfect”, “Good”, “Great”, “Bad” tutoring possible results
– “Bad” appears to give a minimal amount of Exp
– “Perfect” gives twice the experience
– Seems to be random which result you get
– Result affects amount of XP and a student’s Motivation

– Besides tutoring, you can choose the “Set Goals” option to make a student focus on two Professor Levels for them to improve via self-studying each week
– By improving certain levels, you can make students enter exams to change class
– Students can also suggest their own goals, but only you can approve them

– Each week, two students can be given group tasks
– When they complete the task, the Professor Levels for that task will increase and the support points between the two students will go up
– Depending on the success, a reward can be earned

– Some students have 3 stars next to a Professor Level they’re weak at
– After tutoring this level a certain number of times, the student’s talent in that level may bloom
– Besides becoming adept in that level, the student can learn new skills and abilities

– The Church of Seiros, which is deeply rooted in Fódlan, was founded by the Divine Seiros
– In the distant past, they fought against the Liberation King Nemesis during the War of Heroes, to restore order to Fódlan
– It’s said they helped to establish the Adrestian Empire as well
– As time passed, the Holy Kingdom of Faerghus became independent, and later the Leciester Alliance split off as well
– A long war was fought over supremacy
– However, in the present era, the nations exist in equilibrium and it’s largely thanks to the Church of Seiros

– Many of the nobility, who are descended from Fódlan’s Ten Greats who fought during the War of Heroes, hail from families that bear crests
– Crests are passed down by bloodline, but not all descendants inherit crests and only a small number of people can invoke their abilities
– Crests are divided into “Major Crests” that contain immense power and “Minor Crests” whose power is weaker
– Generally, it’s believed the stronger the hero’s blood, the higher the chance of having a major crest
– A child with a major crest can suddenly be born and the reason behind this is currently unknown