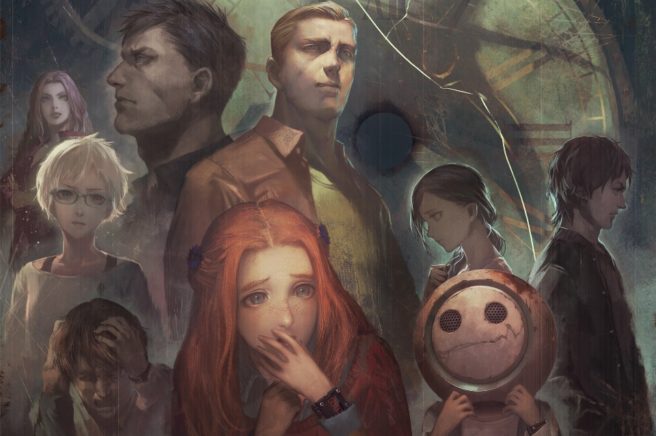 Around the time when Zero Time Dilemma was launching in Japan, Famitsu caught up with series creator Kotaro Uchikoshi about the new game. Uchikoshi spoke about how it came to be, the different aspects of gameplay, and even the ending (don’t worry, there’s only a bit on this and not much in the way of spoilers).

Since the interview was quite lengthy, we’ve opted to summarize the discussion. Continue on below for all of the important points.

The conclusion to the series, restarted to respond to enthusiastic requests from overseas fans

– When Uchikoshi joined Spike Chunsoft, the first title he worked on was 999, but at first it was planned to be a standalone game. Later on it received a “Platinum” from Famitsu reviews, as well as a good reception overseas, which was why there were talks of making its sequel only afterwards.
– They were making both the second and third games for the DS, but at that time (in 2010) the new generation handhelds 3DS and PlayStation Vita were announced.
– They wanted to work with the new systems, but considering they were developing two games at the same time, they didn’t have enough time and budget. In the end they decided to only make the second game (Virtue’s Last Reward) first, and waited to see its reception before deciding to continue the third game.
– Requests for another sequel after Virtue’s Last Reward were high, but most especially from overseas. Thanks to that, the company also gave a “Go” sign for the third game.
– When asked about the similarities and differences between Japanese and overseas fans:
Similarity: The elements they enjoy in the games may be actually the same.
Difference: Overseas fans have much enthusiasm. Uchikoshi thinks it’s because of a difference in history. Japan has had games in the same genre since long ago, such as Banshee’s Last Cry. On the other hand, the west’s first experience with such a genre was 999, so it felt very fresh to them, which was why the hype built up quickly. It also helps that games within the genre are still relatively rare in the west.

Taking preparations as the conclusion game, and making new challenges on the system

– There were some plot holes from 999, such as things about Alice. When there were still no plans to make a sequel, Uchikoshi wished he could make it into a series. By leaving out some mysterious parts, it’d be easier to connect when they decide to make a sequel.
– When Uchikoshi was developing the second and third games simultaneously, he had the plot skeleton for the third game which was left intact, but the rest of the game became totally different. It’s because when he was writing the plot, he already knew what the outcome was going to be, so he might end up getting bored in writing the scenario. In order to avoid that, he had a suggestion to ‘surprise himself even more’, which resulted in the story getting changed.
– Zero Time Dilemma has more of a focus on voices. The image for the scenario is also shifted from being like a light novel to more of a western drama. Many of those parts were changed intentionally. Uchikoshi even tried to make his own ‘American joke’ just like in Virtue’s Last Reward. However, the Quest part was done by another writer, so it should have the same gag flow as usual.
– Uchikoshi doesn’t write a clear conclusion to the scenario again. Regarding the main gimmicks and tricks, they had been decided from the start, but Uchikoshi started writing about them without clarifying the conclusions.
– While writing the scenarios, he imagined how the characters would move, and the scenes that came out were put into the text until the conclusion. The interviewer found it surprising, since he expected him to have a clear stop due to having a big flow with three titles. At first Uchikoshi wanted to do it like that, but it just couldn’t come out well, because as he mentioned before, mid-way he wanted to change the conclusion.
– Rather than impossibly expanding it all according to the plan, he’d prefer leaving it to the natural flow. He intentionally made the conclusion to feel natural in-universe but can invoke controversy among users.
– Uchikoshi didn’t have many re-writes, but on the contrary the time he worried with that was very long. Most of the plot holes from past games should be covered here. Other than listing them off by himself, he also referred to a summary list of questions and unsolved mysteries pointed out by foreign fans from the localization company.
– The three Zero Escape games have had their stories and gameplay systems based on Time Axis. When asked if it’s Uchikoshi’s favorite theme, he said it was indeed so initially, but this time he started with the premise of using the time jump feature from Virtue’s Last Reward. However, if they were to use that feature as is, it could retcon the prequel story, which is why the scenarios in this game are fragmented and they’re challenged to make a system where the scenarios can be read in any order as the player likes it.
– Stories are usually composed of introduction, development, climax and conclusion, but they think it should be interesting too if the player doesn’t have to follow the story in a single line and can change parts of them and watch them in any order at will, which is why this system is made.
– To make sure players can view the story in any order, they did a test play first, and the testers already showed different tendencies; one progressed quickly by skipping the complex branches first, the other went more slowly by collecting fragments one by one. Adventure games usually do not have much freedom, but this game is comparatively have more freedom than usual.
– Uchikoshi made the [gameplay] system first before the scenario; that’s why he could finish up each of the fragment scenarios.