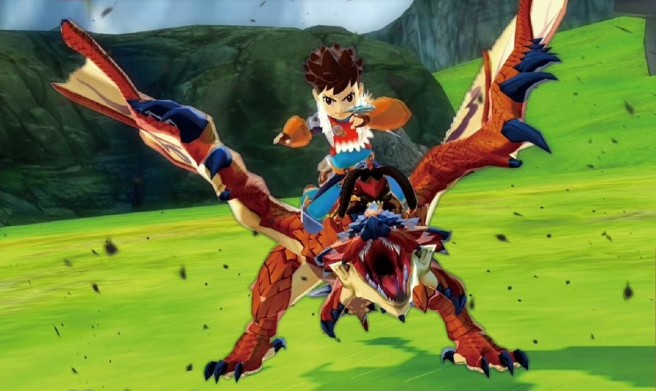 Monster Hunter Stories was announced way back in April. But it wasn’t until the release of this week’s Famitsu that proper information about the game was shared.

Monster Hunter Stories is an RPG set in the Monster Hunter world. It tells the story of “Monster Riders” who form bonds with monsters.

As noted in Famitsu, the title begins in the Rider Village. The protagonist receives a “Bond Stone” from the village chief, which is necessary to pass a trial and become a full fledged Rider. Nabir, who grew up with the protagonist, is a partner in the trial and is determined to see the world outside the village.

Riders come from a village far separated from the Hunter’s society, and live a self-sufficient lifestyle. The magazine tells us about monsters that can form bonds with Riders known as “Otomon”. As for the protagonist, you can be a young boy or girl as a fledgling Rider.

There’s a looming shadow of unrest, and people begin noticing serious changes in the environment. Riders and Hunters will play their roles utilizing their respective items. Famitsu says that the key lies within the Bond Stones, and the truth lies in an old legend. Along with your partner Nabir and co, a grand story unfolds.

The magazine gives us the following information about the different characters:

-Adventures with the Protagonist, an Airou (Felyne) with a personality

– Bright, vigorous, and curious
– Energetic girl who follows after the protagonist’s group

Monster Hunter Stories features a turn-based battle system. Of course, that means battles proceed based on choosing commands. Monsters encountered on the way begins a battle.

There are three commands in a triangle formation that can be used: power, technique, and speed. These are dependent on the habits of the chosen monster. Players will need to read up on monster habits and use them to their advantage to dish our great damage.

In Monster Hunter Stories, Riders form bonds with Otomon to fight. The key/focus is “bonds”, which is especially important in battle. Players can change weapons as well as damage multiple enemies, and there are special abilities for weapons like the “Nagiharai” for a great sword and a “Shield Bash” for the sword and shield. You can expect plenty of action with the Rider and Otomon both attacking with various abilities.

As they battle, the bonds between Riders and Monsters will deepen. When gathered after a certain point, the Rider becomes able to use “Ride On” to mount the Otomon, making combat ability soar. You’ll also eventually be able to use the incredible power within the “Bond Stone”.

Eggs known as “Otomon Eggs” can be found on the field. A new Otomon appears if you return to the village with them. The fun is in discovering what will come out.

According to Famitsu, players will come across many “unusual phenomena”. You’ll be visiting various towns and places on the fields.

Hunter Village is where hunters gather. There’s a marketplace with various shops, a Guildmaster, and “Hunter Guild”. The atmosphere here will be familiar to long time series’ fans. Various creatures from the series such as Airou (Felyne) and Merarr (Melynx) also live here.

Lastly, Famitsu talks about the opening field in Monster Hunter Stories. Cliffs, water, and nature are abundant, along with a steep and dangerous valley. Large monsters lurk deep in this valley in hopes of protecting it. There are various things to warn people to the dangers of this place.

Players will have to face many monsters they have never seen before in the various environments. Capcom is including thick woods, a burning desert, swamplands, and more.

Monster Hunter Stories will be playable at the Tokyo Game Show later this month. We’ll have more on the game very soon.