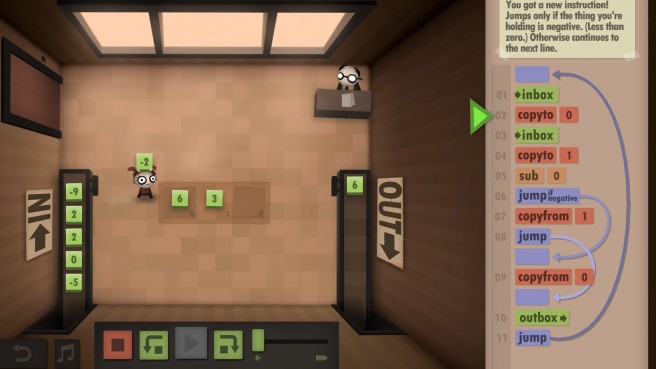 Nearly three years ago, Tomorrow Corporation brought Little Inferno to the eShop in time for the Wii U’s launch. The studio is now almost ready to release its next game, Human Resource Machine. Just a few weeks ago, an announcement was made confirming a Wii U launch for October 14.

We recently got in touch with Tomorrow Corporation’s Kyle Gabler in hopes of learning more about Human Resource Machine. Gabler shared more information about the game and talked about what we can expect from the Wii U version, and also touched on a few other topics like the Nindies community and the difficulties of being a small team.

For our full interview, head past the break.

How would you describe Human Resource Machine to those who haven’t heard of the game before? Can you share a brief overview with our readers?

In Human Resource Machine, you program little office workers to solve puzzles. In each level, your fat little boss gives you a job, which you automate with your worker. If you succeed, you’ll be promoted up to the next level for another year of work in the big office building. Congratulations!

And unlike our previous games, we tried to make sure the trailer actually explains what’s going on, so this might help.

The premise behind Human Resource Machine is a bit unconventional. How did the team come up for the idea for this title?

Computers are really simple – beautiful and cleverly designed – but really simple things. And a modern workplace weirdly works as a pretty close metaphor for what goes on inside a CPU.<

So, you don’t actually need to know any of this to appreciate playing the game, but the “office” in your game is actually a real working CPU, with inputs, and outputs, and little slots to store data for later like memory, and 11 simple commands that you discover through the course of the game. With enough memory and time, it’s powerful enough to simulate any algorithm in the world – and we’re really curious to see what players do with it.

Human Resource Machine seems like the core game mechanic revolves around teaching players about coding. When making a game that has an educational aspect to it, how do you ensure that it’s first and foremost fun, while still providing something more than just entertainment?

HRM let’s you use programming as a tool, and you get all the free learning that comes along with that (just like other games might teach you to shoot or jump good), but this is a puzzle game at its core.

We’re starting to see some really great programming games lately, like TIS-100, Heart.Break(), and some old favorites like Manufactoria and Cargo Bot. And it makes sense, since programming is just puzzle solving, it lends itself naturally to creative gameplay. It’s like playing with legos, but instead of building physical structures, you’re building behaviors.

And it’s a good thing these games are here. The robots are coming. And what’s a good way to survive the invasion? Learn how to program! Stay relevant in today’s modern world! Or you will be deprecated.

This will be Tomorrow Corporation’s second Wii U title. Have you learned anything new about making games for Wii U/releasing titles on the eShop since the launch of Little Inferno?

We learned that we love MiiVerse. And in HRM, we’ve added a similar doodling feature so you can label things in your office with drawings and scribbles, like this.

Were you pleased with how Little Inferno’s performance on Wii U from a sales perspective? Did the game’s reception encourage you to bring Human Resource Machine to the eShop?

The Wii U was a perfect platform for Little Inferno, and sold well! All three of us have been Nintendo fans since we were kids, and so bringing our games to Nintendo consoles is also a nostalgic decision as well as a business one.

Will Human Resource Machine take advantage of Wii U in any particular ways? Are there plans to use functionality such as off-TV play or Miiverse?

We’re big fans of off-TV play. TV’s are so hard to use. Does it have the right input source selected? Is it on channel 3? Is the VCR passing the signal through? Is the aspect ratio preserved? Is the frame rate multiplier disabled? Ugh TV’s. So, yes, Human Resource Machine is fully playable on the GamePad all by itself, just like Little Inferno was. We also discovered that the stylus is a perfect input device for this game – I wish I had one on my laptop!

It seems like there is far more of a tight­knit community of indie developers for the Wii U and 3DS then there is on comparable systems. Why would you say this is?

It takes a weird kind of developer to make a game that fits on a Nintendo platform – the kind of semi-functional adult who can find silly fun in anything, or dig a hole and find a whole world in there, or stare up into the sky with big sparkly eyes because everything’s just so amazing – like a bunch of kids who don’t want to grow up. So maybe we’ve got that in common with other developers and other Nintendo fans.

Little Inferno not only impressed Nintendo enough to help localize it for the Japanese market, but to also feature it in one of their Nintendo Directs. How does Nintendo support developers in a way that makes it stand out from other platforms?

Other platforms are becoming more and more automated, but we still work with real humans at Nintendo. One day all employees at Nintendo might be replaced with robots too, or mushrooms, but until then, we enjoy the human touch.

What are the struggles of being a small, three­-person team trying to compete against larger studios for space on platforms like the eShop and Steam? What are some of the advantages?

We’ve never felt our three-person team had any chance of competing with big studios, like a little rowboat colliding with a barge or something, so we try and paddle another direction to explore different stuff. These days, though, it seems like everyone is making an indie game on the side, and we have to try and stand out among hundreds of talented people releasing creative games every day like “I am Alone and Nobody Understands or Has Felt This Way That Is Unique To Me: The Game” or “Dolphin Punch Simulator 3000” – it’s tough to compete with that!

What does the future hold for Tomorrow Corporation? Do you have any ideas for future projects?

We just hope players have as much fun with Human Resource Machine as we have! Responsible people who like doing homework, creative problem solvers, fans of Star Trek, parents of slightly autistic kids, Art History and French Literature majors who want to stay relevant when the robots come, try Human Resource Machine! You will be put to good use.

Massive thanks to Kyle Gabler for participating in our interview and answering our questions!