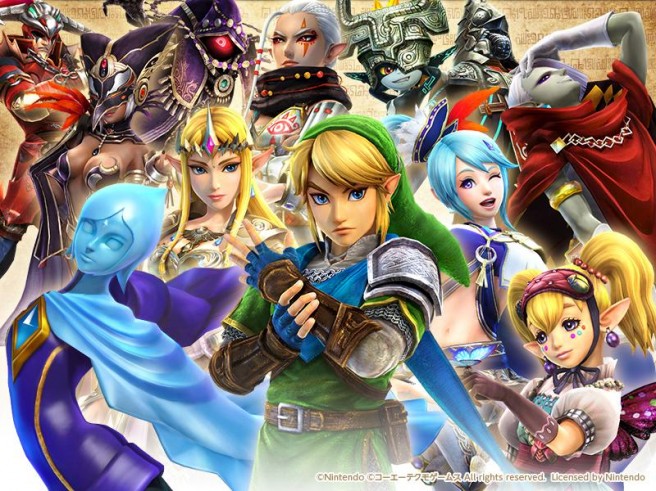 Following up on our last report, we have another round of details about Hyrule Warriors from Famitsu and the game’s official site. The latest information further covers the Gerudo Desert and Temple of the Sacred Sword along with more story tidbits, sealed weapons, and the Manhandla enemy.

– In the eastern area of Hyrule there is a rift called Death Valley that separates northern and southern areas
– It is impossible to build a bridge across the gap
– In front of that deep valley, there is a vast barren desert called Gerudo Desert
– In the desert one can see traces of a barbaric civilization of long ago, like in the form of an execution site
– There is also a village of the descendants of that civilization, Gerudo
– Since an unusual event occurred in the world, monsters from various places drifted to the desert
– Now due to their rampage, people can’t live there anymore since it has turned into the world of survival of the fittest

Temple of the Sacred Sword

– Located at the western end of Hyrule, inside a citadel city
– The city once flourished, but several hundreds of years ago it faced raids of many monsters and and thus fell into ruin
– In those ruins there are no longer signs of human or monster activity
– In that crumbled area, there is a grand temple in the same figure as it was in the olden days; it seems like time had stopped at that spot
– Inside that temple, there is a precious sword that many thieves have tried to draw out of its pedestal – yet no one has succeeded
– With the years passing, eventually there was no one left to try stealing it so the sword and the crumbled city faded away from people’s memories

– Ganondorf is plotting to take over the world with the help of Ghirahim and Zant
– But do Cia and Ganondorf join forces? (semi-literal Famitsu translation)
– Heroes will separate their forces when approaching the worlds that Cia summoned
– Sheik and Impa head for the world of Ocarina of Time
– Lana goes into the world of Twilight Princess
– Link enters the world of Skyward Sword
– Players can choose freely in which order they want to proceed into these worlds

– When controlling specific fortresses (areas), a treasure chest containing a sealed weapon may appear
– Sealed weapons are different weapons with unique properties and visuals
– Ex: normally Link wields his Knight’s Sword, but with sealed weapon you can unlock the superior White Sword
– Once a sealed weapon is unlocked, it is also possible to obtain those weapons as weapon drops during a battle

– Huge plant monster living in the wilderness
– It can harden its skin to control evaporation and to protect itself from enemies
– When Manhanndla toughens its skin it becomes hard as metal so you have to wait until it returns to green color again to deal damage
– Below its body, there are small roots that serve as legs and thus it can move freely despite of being a plant
– Although it is not the prettiest flower to look at, there is a beautiful crimson colored crystal inside its body