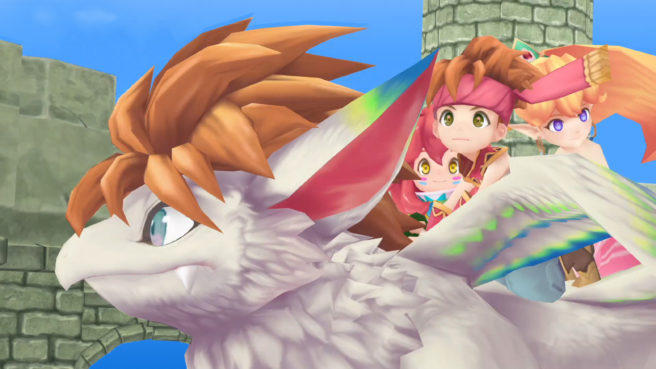 Square Enix will soon be bringing out a remake of Secret of Mana. At least for now, the game won’t be offered on Switch. That doesn’t mean Square Enix isn’t considering it, however.

Producer Masaru Oyamada reiterated to USgamer that development on the Secret of Mana remake began before Switch was announced. Square Enix was later “very surprised to see the amount of demand and feedback we received for a potential Switch version.” Although there are no promises, Oyamada said the team “will make an effort to see what is feasible in the future”.

“To kind of give background in terms of when the project started, it was about two years ago, and the Switch hadn’t been announced. Once we had announced this particular remake title, we were very surprised to see the amount of demand and feedback we received for a potential Switch version.”

“So, the voices are heard, we’re aware that people are desiring a Switch version, and we will make an effort to see what is feasible in the future, though nothing is confirmed or planned.”

You may recall that Square Enix did bring Seiken Densetsu Collection to Switch last year. Unfortunately, as of now, it’s currently-Japan exclusive. But that could change in the future.

Oyamada noted the following about the possibility for a western release of Seiken Densetsu Collection:

“Obviously, our focus is on Secret of Mana since we’re in the last part of its development, so obviously it’s hard to definitely say that yes, we will release it. But we’ve obviously heard a lot of demands and requests for that game to be released in the west, and that’s something we will do our best to hopefully achieve, but nothing at this moment in time.”