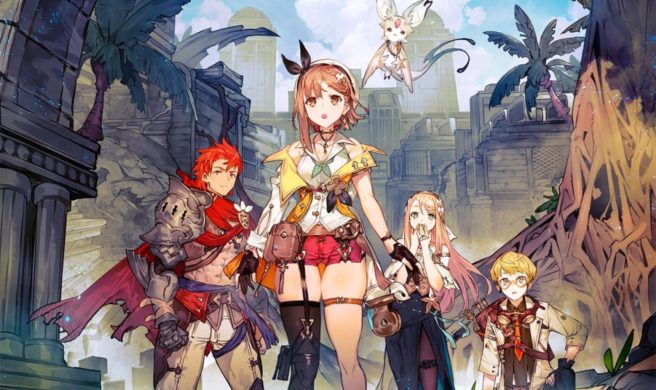 The Atelier series doesn’t typically see direct sequels, but that’s exactly the direction Koei Tecmo and Gust decided to take with Atelier Ryza 2. Following the first game’s massive success, the sequel arrives this December in Japan and late January 2021 in the west.

Nintendo Everything recently had the opportunity to speak with Gust brand manager and Atelier Ryza series producer Junzo Hosoi. We chatted about what’s new with the battle system, the game’s characters (including their designs), and more. Also, for more general topics, Hosoi talked about Switch, addressed the possibility of Atelier remakes, and shared a few thoughts about the franchise’s future.

Our discussion can be read in full below.

The first Atelier Ryza debuted a new battle system that was a mixture of turn-based and real-time action. How has the battle system evolved in the sequel, and what are you personally excited for players to experience?

The way we’ve approached the base battle system hasn’t changed, but by adding more intuitive action elements, our goal is to make it less stressful to play. Increasing the Tactics Level had to be done manually in the previous game, but is now automatic, and time will pause when selecting items. In addition, the Item Rush, where Core Charges are used once to allow for the consecutive use of items, and the Core Drive that is activated from the Item Rush, are some of the various strategic skills that have been added for a fresh gameplay experience.

By increasing the action elements, I think that players will be able to feel what the characters on-screen are experience. I hope everyone will enjoy the new real-time tactics battle of Ryza 2.

The first game had a focus on character-driven stories of children adventuring together during summer, and learning to grow up. Now that the characters are older, what kind of tone and character-writing are you aiming for with Atelier Ryza 2?

The adventure during a single summer theme has not changed, but the setting has changed from a small rural town to the city, so players will be able to experience a world that is a very different atmosphere. The theme of the game is the mystery of the ruins and lost legends, and within it the portrayal of encounters and separations. The characters will show how their experiences in the 3 years that have passed have changed them, or not changed them, and what they experience in this unforgettable summer adventure centered around the lost legends and ruins.

The new character designs are stunning. Everyone looks more mature, such as Ryza with her coat-style top. Could you explain more about the process you (Mr. Hosoi) and Toridamono went through to perfect the character designs? Which design is your personal favorite? (I like Clifford.)

The character design process that Toridamono-san and I go through is probably unique in that we just keep discussing about it. Toridamono-san doesn’t just show us the design and we provide our feedback, but it was mostly Toridamono-san sharing with us screens of the in-progress design and making adjustments on the spot. So during the last month before finalizing the design, we talked every day for many, many hours.

Since I like all these designs, it is difficult to choose just one, but it that Tao’s design really reflects what we’re trying to convey in this game.

Could you tell us a little bit more about the new characters? Who are you most excited for? Anything brand new you can share?

A: The new characters are Patricia, who is raised in the city, Sherri, who also from the Oren race like Lila, and Clifford, a treasure hunter. I think players will enjoy the conversations between the country-bred Ryza and the city-bred Patty. Also, Patty’s battle scenes are really cool!!! In terms of the character scenarios for each new character, Clifford’s character scenario is my favorite.

Oh, and there are plans for a certain character from the previous game, who has a very dedicated following by some Japanese fans, to make an appearance.

What can fans expect from the Switch version of Atelier Ryza 2? As the team continues to gain more experience with the hardware, will there be any particular improvements (such as enhanced effects or higher resolution)?

After the release of Atelier Lydie & Suelle for the Switch, we have gained a lot of knowledge over the years. We were able to use that knowledge in the development of the first Atelier Ryza game for the Switch, and as a result I think we’re been able to achieve a certain standard recognized by the players. For this game as well, we’re learning from our past experience and making adjustments as we progress through development so that players can enjoy this game on any platform.

We’ve seen reoccurring characters like Pamela throughout the series. Is there any chance of an Atelier crossover or cameo in Ryza 2, or in future Atelier titles?

For characters from past titles, there’s always a possibility for them to appear in the latest Atelier title. It depends on the situation at that moment and input from the fans!

It’s been announced that the first Atelier Ryza has shipped over 500,000 copies worldwide, and we’ve also heard that the game has done well in Asia. Is there any information you can share regarding how it sold in the west? Also, are you pleased with how the game sold on Switch?

In the west, the first Atelier Ryza game has sold more than any previous Atelier game. For the Switch version, with the release of each consecutive title, the units sold would expand, so we anticipate that the units sold will continue to expand moving forward.

What do you think it was about Ryza that made her resonate so well with players and become a popular character?

I think that Toridamono-san’s character design gained a lot of attention and was well-received by the players were the key points. And the feeling of being stuck in her everyday life and wishing for an extraordinary experience is something that each one of us feels, may be have resonated as well? I think that Ryza being a relatable, true-to-life girl is what made her connect with a lot of people.

The Atelier games have been releasing in the west not long after their Japanese debut, but do you think a simultaneous worldwide release could happen in the future?

Does Gust have any interest in remaking any of the earliest Atelier titles?

If there is a chance, we’d like to do it one day.

When we last spoke at Tokyo Game Show 2019 regarding the first Atelier Ryza game, Mr. Hosoi mentioned he could see Ryza in the future in the role of a mentor. Where do you envision the Atelier series going from here? Do you think a third game featuring Ryza would be possible?

The Atelier series continues to change so it’s hard for even me to predict what is next, but at the very least I think that there are a lot of different people that have played the Atelier series. So including that point, we plan on announcing a new development so please look forward to it.

And the possibility remains of a third title featuring Ryza!