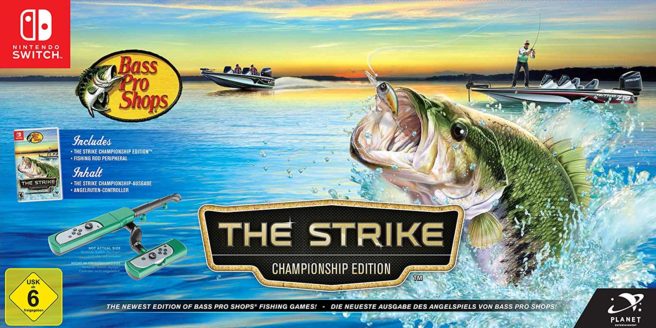 The fishing genre on Switch will expand later this year with Bass Pro Shops: The Strike – Championship Edition. According to GameStop and Amazon Germany, it’ll be released on October 16 in North America and November 2 in Europe.

Bass Pro Shops The Strike might sound familiar to those who kept up with some of the more obscure Wii titles back in the day. That’s right – it looks like this same originally came out on Wii several years ago, and is now returning on Switch. A fishing rod peripheral will be included where players can slot in the Joy-Con.

GameStop has pre-orders for Bass Pro Shops The Strike here and Amazon Germany has it here. We have some screenshots and a bunch of information below.

Bass Pro Shops: The Strike – Championship Edition combines authentic environments based on real lakes, engaging gameplay with accurate fish and lure behaviors that creates an immersive fishing adventure. Players can enjoy 3 different game-play modes including Quick Fish, Career and Bass Pro Shops Invitational Tournament, or compete with friends in mini games like boat races and casting challenges. Players cast, jig, set the hook, and fight as if a real fish were on the other end of the line. The game takes players to some of North America’s most famous fishing hot spots and features eleven types of game fish including Largemouth, Smallmouth, Catfish, and Striped Bass as well as Northern Pike and Muskie. In addition, realistic lake bottom topography, advanced graphics, and authentic fishing gear from the Bass Pro Shops stores, all combine to offer virtual anglers the most comprehensive fishing game experience to-date.