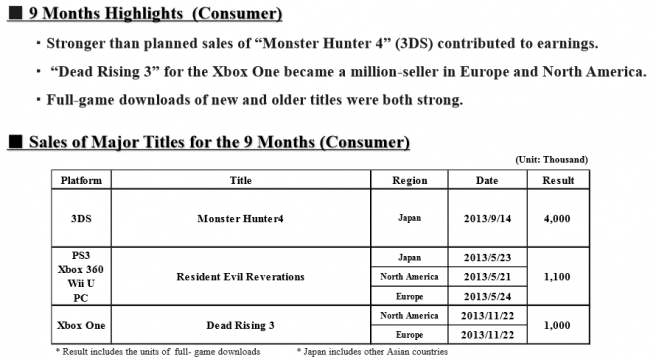 Capcom’s latest financial results are in, and they bring encouraging news for a quartet of Nintendo-related titles.

Monster Hunter 4 saw “overwhelming popularity,” according to the company. The game ended up “creating a huge buzz even comparable to a sort of social phenomenon”.

DuckTales Remastered sold quite well, too. According to Capcom, the remake experienced a “better-than-expected performance”.

In the Digital Contents business, in addition to the feature title “Monster Hunter 4” (for Nintendo 3DS) being supported by overwhelming popularity, as mentioned above, and creating a huge buzz even comparable to a sort of social phenomenon, “Dragon’s Dogma: Dark Arisen” (for PlayStation 3 and Xbox 360) also steadily increased sales.

Furthermore, projected sales were basically achieved for not only “Dead Rising 3” (for Xbox One) that has been geared toward the European and North American markets, “Resident Evil Revelations” (for PlayStation 3, Xbox 360, Wii U and PC), but also “Phoenix Wright: Ace Attorney – Dual Destinies” (for Nintendo 3DS).

Furthermore, the downloadable versions, which respond to changes in forms of distribution, contributed to expansion of sales by growing significantly both overseas and domestically in line with the progress in diversification of business models, including the better-than-expected performance of “DuckTales: Remastered” for overseas markets in addition to the aforementioned “Monster Hunter 4” showing strong sales.