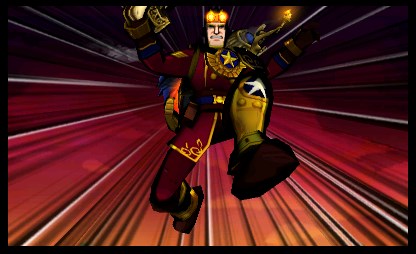 3D models were created next and we tried playing the game with those. I tried to make a faithful recreation of American comics with things like using a color palette that corresponds to the printing technology of American comics from that era, giving a halftone treatment, and having no detailed gradation shadows but rather flat colors. However, the visibility was bad, eyes felt irritated, and team members commented harshly like “I know the depth when stereoscopic 3D is on, but I can’t discern the depth at all when it’s off” or “I felt sick”. So I took notes about which things in appearance made playing easier. I made changes like somewhat mellow lines and a color scheme which was gentler to the eye. It wasn’t a faithful recreation anymore, but something that presents similarities to the style.

After this, Sakai says 2D illustrations were created, and he was able to determine a more detailed direction. He mentioned, “Elements which were removed from 3D models, like halftone treatment, were only used in the production of 2D art and in-game comic cut-scenes.”

Finally, here are some other interesting comments from Sakai:

The job isn’t finished when the illustrations are done, as you have to make adjustments so that it looks fine on the move, too. An early 3D model was good while standing still, but as several contrasts were too strong, the model flickered while moving. In one word: messy! After doing trial and error for a while, I decided to reconsider the model.