Posted on September 5, 2021 by Brian(@NE_Brian) in Interviews, Switch 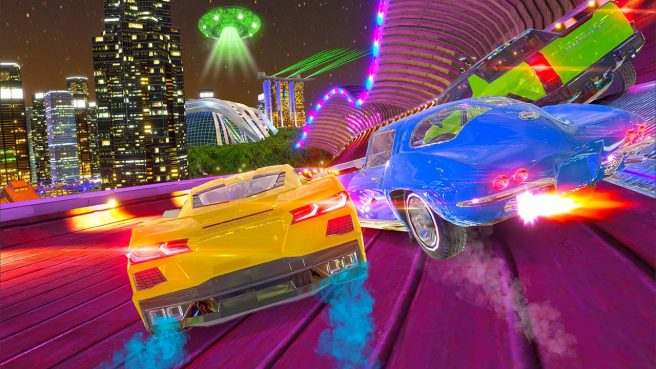 Ahead of Cruis’n Blast’s launch on Switch this month, we’re publishing a new developer interview with series creator Eugene Jarvis. Jarvis had much to say about putting the racer on the console, including how this new version came to be, why it’s an exclusive, and whether we could see online play supported in the future.

Our full discussion can be read in full below.

Going back to the origins of Cruis’n Blast, how did the game originally come to be?

Cruis’n came about from my addiction to the great drivers of the ‘80s – Pole Position, Turbo, OutRun, Hang-On, etc. I loved the sense of joy and speed, but I was always frustrated by the lack of head-to-head competition in the single-player games of that era. Then Namco’s Winning Run and Atari’s Hard Drivin’ blew everyone away with true 3D driving – and it was clear this was the future. It’s true that the pathetic solid color polygon graphics of these early 3D drivers was heinous, but there was this new texture mapping polygon tech that could make some sweet graphics, if it only could be accelerated to the 60Hz frame rate of arcade games, as opposed to spending minutes rendering a scene for motion pictures. I liked the challenge of Hard Drivin’s stunt course, but the super laggy steering response and anemic frame rate really frustrated me. You had to turn the wheel a quarter mile before the death turn to avoid going over the cliff! And this was supposed to be a simulator! I decided that I wanted to make a 3D texture mapped driving game that when you turn right – you actually turned right!

There was a pretty lengthy gap since the last entry in the series, so what was the spark that led to its creation?

Yeah so it’s been a while since Cruis’n USA (1994), Cruis’n World (1996) and Cruis’n Exotica (2000). It’s hard to believe, but sometimes you just wake up one morning and a couple decades slid past you! But the crazy thing is I still play the Cruis’n arcade games down in my basement, and when it’s pushing bedtime, I can’t get the kids off those old Cruis’n games. There’s just a timeless magic to those classic drivers that lasts and lasts. So after a gaping 20-year gap, I felt this pull to do a new Cruis’n game. I just can’t keep the old theme songs out of my head – “Cruis’n, Yeah Yeah, Cruis’n USA, Yeah!”.

Is it still the case that Nintendo owns the Cruis’n IP? Did you have to work with the company in any particular ways to get the ball rolling on the project originally?

Back in the early ‘90s we were working at “TV Games” – a video game startup – and the tough thing was we ran out of money developing the 3D texture mapping hardware and software for Cruis’n USA. Nintendo was super impressed by the game so they stepped in and bought the IP, providing the funding to complete the project for Midway’s arcade driver (including a full-motion simulator!) and the N64. And a big shout-out to Nintendo of America’s game guru back in the day, Ken Lobb, who really helped us in crafting the final cut.

Did the team look back on past entries in the series for inspiration? Is there anything specific from the previous games that Raw Thrills wanted to bring back or improve on?

Hell yeah! There is a treasure trove of crazy tracks in far out “real world” locations like the Amazon, Alaska, Mars, ancient Egypt, San Francisco, etc., and the super creative animations, backgrounds and awesome SFX in the classic Cruis’n games. And we especially wanted to bring back the user-friendly and responsive Cruis’n handling and sense of fun! The mind-bending head-on collisions, double-pump gas wheelies and stunts, jumps everywhere, giant drops, dueling for first place, you name it.

Cruis’n Blast is now set to appear on a console four years after its arcade debut. How did the Switch version come to be?

We were exclusively focused on the arcade market, and Cruis’n Blast was killing it in the arcades worldwide. Then Nintendo Switch came along, and I got ahold of the new Mario Kart 8 Deluxe, and damn if it wasn’t the coolest game ever! And the graphics were crisp and very responsive. After playing a ton of Switch games, I’m like – this system is great, and it’s so easy to use – just like an arcade game! I hadn’t had this much fun on a console since my Wii controller went flying into my plasma TV!

Since the Cruis’n series has a history of appearing first on arcades and then consoles, was that always the plan for Blast as well? How long has the Switch port been in the works?

To be honest we hadn’t really thought about consoles until the pandemic hit, and all the arcades shut down. And then we’re like – dude how do we make the payroll next week? So just for fun our ace Cruis’n Blast coder gets a Switch dev kit and has the thing up-and-running in like a week. The graphics and frame rate were impressive. Couldn’t believe it. So we decided to make it happen! Players have been hammering us for years to get a Cruis’n Blast on the Switch – so how about a new business model? – give ‘em what they want!

What’s it been like working with Nintendo for the new Switch release?

Nintendo has been amazing. We were stunned at how easy it was getting Blast up-and-running, but to pack in all the shaders and special effects and really hit frame rate proved to be a challenge. After a number of months of nose-to-the-grindstone coding and optimization, we got the game looking pretty sharp. The submission process was challenging dealing with all the technical requirements and massively serious play testing for submission. But since the game was really a lot of fun to play, the testers didn’t lose their sanity in the process. Finally getting accepted was super exciting and we were beyond thrilled to be a part of the Nintendo Direct reveal at E3!

Are there any particular reasons why Raw Thrills decided to make the console version a Switch exclusive?

We’ve always loved the tradition of Cruis’n being exclusive to Nintendo from day one, and the Switch is the ideal platform and audience for arcade-style gameplay. By just going with one console we could take the time to completely optimize performance and gameplay without the compromises required when porting to multiple platforms. John Vignocchi and the team at Nintendo of America were incredibly excited about bringing Cruis’n back, and were totally behind us all the way to make this happen. So we knew this was our destiny!

What has it been like adapting the arcade experience to the console space? Is there anything you can share about what the porting process has been like?

Switch games and arcade games are close cousins. They both need excitement, great action, easy controls and tons of fun, but you really need to pack a lot more content and depth into the Switch. In the arcade you have incredibly immersive cabinets with awesome sound, custom tactile controls and large monitors, and if you have an hour of killer content you’re going to rock it with the more casual arcade players. At home you get massive repeat play so you need hours and hours of challenging races and special cars because you want the kids to play a zillion times and never get bored. So we went from 5 to like 20-something tracks and added lots of shortcuts, secret vehicles, SFX and other goodies to keep the party going!

What will the frame rate and resolution be in docked and portable modes?

We do know that local multiplayer will be present, but are there any plans to support online play? If not, is there a possibility of adding in the feature after release? We’ve seen that some games continue to receive updates after release. Will Cruis’n Blast have any sort of post-launch support?

In order to hit the tight launch window, we couldn’t fit online play into this version. The Cruis’n vibe has always been head-to-head live play, true to its arcade roots. It’s just the most fun way to play! But we’re hoping the game goes into the stratosphere after launch – so then we can start working on these future goodies!

Now that we’re getting Cruis’n Blast on Switch, is there any interest in porting other Raw Thrills arcade games to the console?

Personally, I’m dying to get The Walking Dead on the Switch. We’ll see if we can pull it off.

As someone who’s worked on Cruis’n since the beginning and for so many years, what does the series mean to you personally?

It’s hard to imagine working on a series for a span of 30 years. It’s a total rush. After decades in video games you realize that creating a game that totally captures the spirit of players for even a moment in time is super rare! To be one of the first 3D texture mapped games, and then establish a new genre in real-world adventure driving, and see Cruis’n rockin’ on for decades is insane. I feel like we are taking off again!

What do you imagine for the future of Cruis’n?

There’s an old saying that in this forever disposable world, a game coder is only as good as your last line of code (or in the case of an artist, your last pixel!)! So who knows what might happen. One idea would be to do a Switch retro-cade type thing and bring back the classic Cruis’n arcade trilogy – at full HD arcade resolution and 60Hz frame rates on the Switch. 30+ tracks! All 3 theme songs!!!!! “Cruis’n, Cruis’n the World, Yeah Yeah!”. “Cruis’n Exotica – can you dig it?”. I can’t wait…

Nintendo Everything would like to extend its thanks to Eugene Jarvis for participating in our Cruis’n Blast developer interview. The game will be out for Switch on September 14. You can check out the latest trailer here.