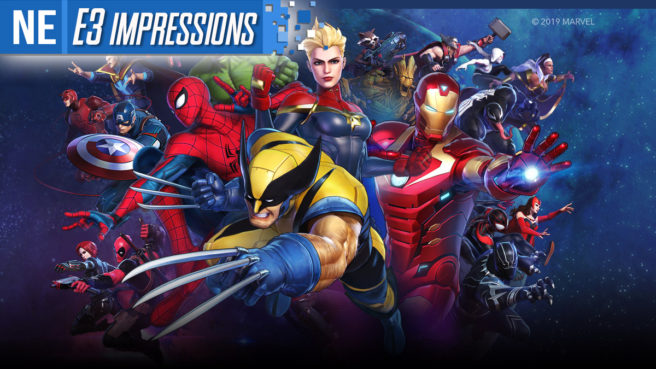 This month at E3 2019, Nintendo kindly invited us to their booths for a private look at their most important upcoming titles of the year. In part two of this series, we’ll be taking a look at the most unexpected game of the lot: Marvel Ultimate Alliance 3.

You can check out footage of Oni Dino playing games from E3 on our YouTube and hear Oni Dino chat about E3 impressions from the show floor on our weekly podcast (available on iTunes, Spotify, and many more platforms).

For more detailed impressions of Marvel Ultimate Alliance 3, check below the break.

The demo started off displaying the game’s controls with the Joy-Con Grip and Pro Controller, or the sideways Joy-Con. The sideways Joy-Con has a couple of control inputs noticeably absent due to the lack of buttons: camera control and Synergy Link. I’m not sure if this will affect play at all, and I had the pleasure of using a Pro Controller during the demo, so we’ll have to wait until more details come out. Also of note right out the gate, the initial loading screen took 40 seconds. It’s very unlikely that the opening of the demo will be the beginning of the proper game, and this could just be a rather unoptimized loading environment that was put together to create an E3 demo. Looking to give the game the benefit of the doubt, hopefully we’ll see shorter loading times upon retail release.

Once the game fired up, I was able to pick my poison from a large selection of superheroes: Storm, Black Panther, Captain America, Iron Man, Groot and Rocket Raccoon, Wolverine, Captain Marvel, Thor, Star-Lord, Deadpool, Venom, Miles Morales and Spider-Man. Honestly, the selection was so generous that I couldn’t try them all out in the short time I had with the demo. I didn’t want to waste any time, but I noticed from the team menu that there was bonus info, ability info, and team bonus info available to help pick my desired fighters. Team stat bonuses were applied depending on which selection of four heroes I chose from, adding an extra layer of strategy. I also noticed loading times from this menu were a bit of an issue, too; I did change all four of my characters up, which I anticipate caused the bulk of the delay, but it took 5 seconds of loading to leave the menu. Hopefully this gets shored up by retail release as well.

On the bright side of things, all of the superheroes I chose were nicely modeled with an excellent balance of textures and accessories. Colors were vibrant and very reminiscent of comics and cartoons, and even a bit of the aesthetic from Ultimate Marvel vs. Capcom 3. All of the game’s superheroes were exciting to look at and had impressive designs that made me look forward to playing as them. There were multiple areas throughout the demo where I could switch my heroes out for others waiting in reserve, but I’m not sure if that was for the demo only or if it’ll be something that carries over into the full game. Interestingly, these spots also served as a full heal for the party.

The story of the demo was just the right balance of giving me a mission, and introducing some side characters for personality. It took a page from the Defenders of Marvel Comics: Jessica Jones and Luke Cage acted as intel to direct me to where Iron Fist was fighting off The Hand in the Shadowland. It kept the pace and gave me a reason to get to the end. Level design throughout was a nice mixture of battle arenas that interconnected, puzzles/stealth sections and corridors. Traversal had some nice verticality to it, as well as some dynamic camera changes to highlight environments and vary up the visuals. Environments were also peppered with usable objects such as flaming trash bins that could be tossed at enemies.

On that note, let’s get to the real attraction of the Marvel Ultimate Alliance series: the combat – specifically the individual abilities and the team up abilities. Each hero in the demo started out with two specials, and by the end they had leveled up and gained another. Only a total of four abilities can be equipped at one time, but the demo lead me to believe that multiple abilities will be learned during heroes’ level progression that players can swap between as they see fit. Characters occasionally were able to perform combined special attacks together, but considering the brief time I had with the demo, I couldn’t figure out what triggered it. I’m sure it’ll be easy to understand once I can play the game on my own time. One of my favorite combined abilities was when Storm conjured up a tornado and Deadpool unloaded both clips of his handguns into it, creating a literal bullet storm.

After these team up attacks came the big special attacks. Each character had a yellow EX meter and once it was full, I could unleash an EX attack by pressing L + R which activated my player character’s ability. However, successive button inputs combined up to all four superheroes’ abilities together into a screen-clearing “Ultimate Alliance EXTREME” attack. This is probably the most satisfying combo attack where all my heroes’ zipped around and used their most powerful techniques for big damage and big numbers.

The game-feel when switching between my heroes was noticeably varied; characters felt different to play and had different methods of traversal. For example, Storm seemed to attack slower and more methodically while her “jump” allowed her to fly and gain ground above her enemies; Miles Morales was an agile king of close combat as he leapt around the stage and used his web swing to traverse. Interestingly, just a simple change like the dynamic camera that pulled in closer to my heroes made the gameplay feel even more like a 3D brawler than previous entries.

Enemies seemed fairly aggressive, as I found myself getting hit multiple times while fumbling with the controls for the first time. They’re certainly not Warriors fodder enemies who stand around in many of those games waiting for their pointless existence to be ended. Enemy variety was pretty run of the mill in the demo with smaller guys, bigger guys, guys with armor/shields, etc. I noticed there were two types of currency that dropped upon busting crates and defeating enemies: coins and something else that I’m quite sure what it was, perhaps some sort of electronic part. Enemies also drop health and special meter restores. There was no auto health regain across the board, but I did notice Deadpool had a slow health regen, which I assume was a passive ability for him which makes sense for his character and his powers. There also appeared to be the occasional rare item drop from a rare crate. Perhaps this indicates some form of crafting between missions? Given the state of modern ARPGs, I’d say it’s a safe bet.

Combat initially felt a little loose, but I can tell it’ll be easy to get the hang of for newcomers in particular. Simple combos and inputs in the form of light and heavy attacks plus abilities made for an exciting but fairly standard affair. Each attack landed with a bombastic sound effect that really gave the impression of impact and added a satisfying crunch to beating all the baddies up. It’s not all about shootin’ space lasers and throwin’ blows, though. Gameplay was given some variety when I had to avoid search lights in tight corridors in order to progress through the level. Once I was caught, I was punished with a flurry of bombs and an enemy surprise attack.

I was a bit disappointed when I reached the end with Iron Fist, though. There unfortunately wasn’t a supervillain to fight at the end of the demo – just an enemy rush to go wild on with all the skills and abilities my team had learned. It was a treat getting to fight alongside Iron Fist – the good one from the comics, not that wet noodle from the Netflix series. His intro scene was the most video gamey, comic booky thing ever. Pulpy yet endearing monologue about how he loves using martial arts, a great display of his abilities, and a flashy intro with his name included. It’s a chef’s kiss, for sure.

Overall, the controls felt great, and I can’t wait to get battling. The visual design was fun and full of vibrant colors in environments and characters, of which there was a great selection of heroes who play differently. I’m looking forward to really sinking my teeth into the full release and getting to know all the little systems and bonuses. Also considering the small amount of writing I’ve seen in the demo, I am eagerly anticipating all of these beloved superheroes interactions with each other. Each character has a wealth of lore and personality to draw from to satisfy the diehard and even the passing Marvel fan with little nods and story beats for their favorite characters.