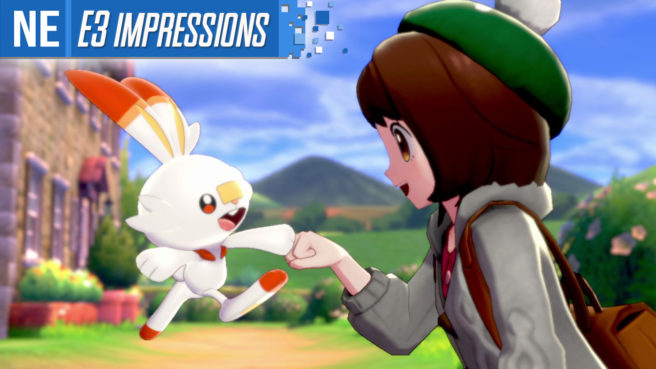 This month at E3 2019, Nintendo kindly invited us to their booths for a private look at their most important upcoming titles of the year: Luigi’s Mansion 3, Pokémon Sword and Shield, Marvel Ultimate Alliance 3 and The Legend of Zelda: Link’s Awakening. Oni Dino was lucky enough to greet Mr. Takahashi Tezuka and Bill Trinen, but the main focus was getting footage and impressions for our lovely readers and listeners here at Nintendo Everything. They’re not important – you lovelies are.

You can check out footage of Oni Dino playing games from E3 on our YouTube and hear Oni Dino chat about E3 impressions from the show floor on our weekly podcast (available on iTunes, Spotify, and many more platforms).

For more detailed impressions, check below the break.

Nintendo welcomed me to their booth on their second level lounge, where all the presenters and developers were relaxing and staying safe from the stampedes on the show floor. A PR representative and demo staff member ushered me to my private station where I had two hours to capture footage and experience demos from some of their biggest titles this year. Naturally, I kicked things off with Pokémon Sword and Shield.

Interestingly, this was the only game that Nintendo did not allow direct-feed capture for – only off-screen capture with a person in the shot. My best guess is considering it is some form of beta build, they don’t want much attention drawn to the imperfections that they intend to smooth out by the time the retail build is ready for release.

Getting down to things, the demo had me playing as the now internet-famous female Pokémon trainer, going off for a “cheeky Pokémon fight” to obtain the Gym badge from another internet darling, Nessa, leader of the Water-type Gym. The selection of Pokémon I had at my disposal was a great blend of types, assuring me an easy victory in each of the battles; I had Sobble, Scorbunny, Grookey, Wooloo, Corviknight and Yamper. I was particularly fond of the newly-revealed Electric Welsh Corgi with the heart on his butt. Enemies I fought against showcased the remainder of the Pokémon announced recently, which gave me a good feel for the new ‘mon, as I had plenty of time to fall in love with their idle and attack animations. However, I was a bit disappointed to see that character NPCs still have little variety in this entry. This is a tiny issue that I’ve had with past Pokémon games, though. In this demo, I ran into two of the exact same NPCs, which I found worrying.

The Water Gym itself had a puzzle to be solved in the form of colored valves that correlate to the same color pipes gushing with water. I had to explore and battle my way past other trainers in order to find the right combination of on/off valves, allowing me to progress through the Gym mission. This type of puzzle is tried and true, and we’ve seen this kind of gameplay mechanic in countless games before. There wasn’t anything innovative here, but it was comforting as it indicated to me that this Pokémon game will have puzzles to solve that require some critical thinking, just like past games.

Once I completed the Gym mission, my character entered the main arena where I dueled against the sassy Gym Leader, Nessa, in front of an excited crowd. Nessa minced no words with me and went straight into battle after a few cliché lines. Hopefully the dialogue gets more care in the retail build. I was very happy to see Nessa’s exaggerated Pokéball tossing animation that evoked mental images of Ash from the anime, though.

Gym Leader battles are where Dynamaxing becomes a factor. Now, even though they’re officially called “Dynamax” versions, I still insist on loving referring to these transformations as “Pokaiju”. Battle transformations are excessively animated and flashy which really drove home the impression that this is a very grand action in battle. Not only does the player character have a special animation, but the Pokémon do, too. Up until now, I tried to get balanced footage of every Pokémon on the team, but as my luck would have it, I chose to Dynamax Wooloo when facing off against Dreadnaw. Wooloo grew into a kaiju sheep and belted out the most beastly bleat I had ever heard. I wouldn’t dare sheer that, no matter how many rare candies you offered me. Despite his formidable appearance, he did next to no damage when I used my only attack against Dreadnaw: Max Strike. I couldn’t do much else but stick to my guns and go down fighting. Each attack animation when Dynamaxed is special with a lot of extra oomph behind it, and that second oomph that Dreadnaw hit me with when using Max Geyser not only took out my Wooloo effortlessly, but Wooloo actually exploded and went up in flames upon defeat. You still expect me to believe they “faint”, Nintendo?

Now, a personal gripe I do have with the Dynamax Pokémon is that blowing up the Pokémon models ends up showing off some flaws. For example, Dreadnaw’s eyes looked painted on his head since there was no depth to his ocular cavity or convex shape that would’ve required a few more polygons to the model. This kind of detail and lack of polygons really stuck out to me and gave me an “uncanny” feeling that I’m not looking at a humongous Pokémon creature, but rather an imitation of a creature like something you’d find on the Pokéfloat stage in Super Smash Bros. Melee.

Something else that did concern me: the demo staff told me that Dynamaxing is only allowed once per Gym Leader battle, and considering how powerful Pokémon seem to get when Dynamaxing, I wonder if my only option in the full game will be to counter a Dynamax with another Dynamax, lest my regular-sized ‘mon will get obliterated by the opponent’s colossal moves. This could still be something they’re working on balancing, though.

Despite my Wooloo literally going down in flames, I nabbed a victory against Nessa using my lovely simian son, Grookey. Upon Nessa’s defeat (which she took pretty hard, to be honest…) I could see a cute Pokéball mascot character on the big screen in the background that I can’t recall seeing in previous games (admittedly, I haven’t played some of the more recent titles much). I wonder if this cute little character will come into play more in the full release. Upon shaking hands in the most sportsmanlike manner, Nessa handed over her badge, which fit into a surprisingly small section of the larger circular crest that players will be trying to fill as they progress from Gym to Gym. I wonder if there’ll be a greater number of Gym Leaders to face in Sword and Shield.

Ultimately, I walked into the demo being a Pokémon fan in remission. I was an absolute diehard for the games back in junior high school the first and second generations were released. I continued to play most of the entries as they launched, but I never had that same fervor for it as I did in the beginning; one could say that I had my expectations low. With that being said, the demo did charm me and assure me that this is going to be a smooth and sleek Pokémon game. Overall, I’m excited for more things in this entry than I have been in recent past entries, even if this isn’t the big leap that I wanted so badly for the series. I still have some aspects of the game I’m underwhelmed by such as the Pokémon models in their Dynamax forms, but I’m looking forward to exploring a more immersive region in the world of Pokémon, all while talking to myself in an overly exaggerated Scottish accent.