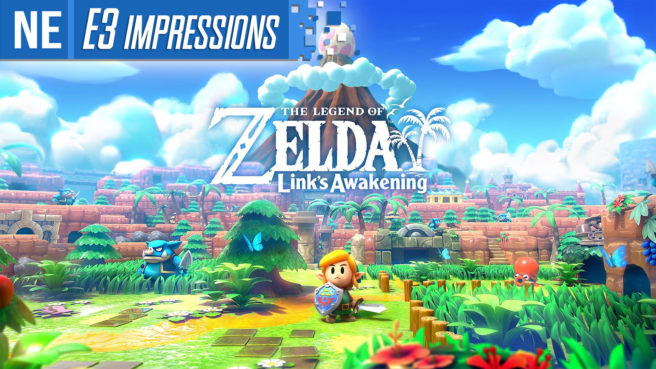 At E3 2019, Nintendo kindly invited us to their booths for a private look at their most important upcoming titles of the year. In part four of this series, we’ll be taking a look at a game I found to be a mixed bag… The Legend of Zelda: Link’s Awakening.

You can check out footage of Oni Dino playing games from E3 on our YouTube and hear Oni Dino chat about gaming and more on our weekly podcast (available on iTunes, Spotify, and many more platforms).

For more detailed impressions of Link’s Awakening, check below the break.

Before diving into my impressions, I must say that I haven’t played Link’s Awakening before. I downloaded the DX version on my Nintendo 3DS many moons ago, but only got a dungeon or two in. For years, I’ve been told that this is an incredible experience with an unsettling, yet fantastical narrative. Plus I heard that the developers were inspired by Twin Peaks when writing the characters and themes, so that’s an absolute snack for me. Ultimately, I hold no nostalgia for the original game, and I will not be unfairly comparing this remake to the original in my impressions. Now let’s get down to business.

Something I want to point out from the title screen. I had to press L + R to begin. Based on this in other Nintendo titles, I think this is indicative of sideways Joy-Con; I’ll bet there’s a multiplayer feature to this game that we’ll hear about in the future.

The demo started off with Link waking up in Marin and Tarin’s house on Koholint Island. And right away, I was pleased to see lots of excellent, small details around the home like pictures, collected driftwood and sand with seashells, gathered toadstools, etc. It already told me a bit about both characters’ personalities. Astute readers will recognize that I value environmental storytelling in very high regard. I found it particularly interesting that a palm tree that was planted in the corner of the room actually reached over the side of the walls with its leaves. Its a cute way of “breaking the fourth wall”, for lack of a better term. I do have to say that I did not like the generic light source background behind the environment, though. It reminded me of late 90’s computer classes and clip art design. Shudders.

As I got out of bed, I was given a Hylian Shield and I was on my way. As soon as I stepped outside, I instantly noticed the drop in frame rate. Inside Marin’s home it was an easy 60 FPS, and later in the demo I would notice this trend on single screen caves, as well. However, when I was on the overworld or forest, I noticed frame dips all over the place. My guess is it was jumping around and stuttering at 40 frames or something, back up to 60 in certain areas. Dips were also apparent when Link performed his signature circle slash and cut grass on all sides of him – maybe the individual blades of grass and particle effects caused this. Personally, all of those stuttering frames were pretty distracting. I find that in an action game such as Bayonetta, I’m not as sensitive to frame drops due to how busy the action is, but a leisurely paced game like this made me feel like I was blinking while playing. On the negative topic of visuals here, I also spotted some pop-in with shadows from trees at the edge of the screen when I walked upward toward them. I was surprised to see all of these little issues, but considering this is still in development, I’m giving the game the benefit of the doubt and hoping things get shored up by release.

When moving about the overworld there’s a pretty aggressive blurring effect around the entirety of the screen, and ample use of bloom lighting. For me, this worked well considering Link is on an island; in a similar vein to Wind Waker, it did give off a strong impression of the sun beating down on the land. Though not likely, I do hope there will be some sliders in the settings menu for these visual effects for those who find them a little too prevalent. I’m reminded of back when Octopath Traveler had its very first demo and asked for player feedback – one of the complaints was that the blur effect was egregious.

As for the aesthetic of the game, it really did have an incredible toy-like art style that made everything feel like clay. Seeing it in action is really charming. Some of the objects reminded me of Kirby and the Rainbow Curse – everything is vibrant and bright. Several design aesthetics in the fonts and menus felt like they were inspired by Breath of the Wild. I noticed the menu had a quest log, markers that I could place on the map, and more. Upon taking a peak at the map, I was very impressed by the amount of detail. It almost felt like a mini recreation of the whole world that showed entry and exit points among much more. Since I have a very visual memory, I really appreciate this level of detail; I can see myself making ample use of it late in the game when I’m trying to pinpoint a specific area that I want to return to. There was a lot of impressive visual trickery on objects in the environment, too. For example, the blades of grass had a heat haze effect on them that gave the impression that the grass was waving in the gentle breeze. Interestingly enough, trees seemed to have their own genuine movement patterns, though. All in all, the overworld had a great deal of nooks and crannies to explore, and I’m looking forward to taking my time to look around and inspect everything. All of these creative choices have fostered a very relaxing and pleasant world to just be in.

Getting down to the gameplay, there’s a lot of classic, top-down Zelda here to love. Combat was the tried and true one-two punch of swing the sword and raise the shield that we’re all familiar with. Enemies with projectiles and shields themselves helped to keep battles varied. I’d be surprised if it wasn’t included, but in the short time I had with the demo I couldn’t figure out how to hold my shield up and continue facing the same direction while I strafed or back-stepped, keeping me defended from enemy projectiles. The demo had the expected variety of Moblins, Chu-chus, Octoroks, Keese, and more. Link seemed to only have eight directions of movement, and not a full 360 spectrum. I found this a little distracting since it felt like his animations when switching direction were a bit rough, but this is something I’m really sensitive to in games – I think most players won’t even notice it. It stood out to me as a bit of a lack of polish in an otherwise extremely tight game, visually. Character and enemy animations were nuanced and lively just as I had hoped they’d be. Standouts for me were when Link fell down a whole, accompanied by a hilarious scream, and the raccoon’s disorientated reaction when I threw magic mushroom dust in his face.

I was surprised when equipping items that there seemed to only be two hotkeys: X and Y. Considering how many more buttons even the sideways Joy-Con have compared to the original Game Boy, I found this kind of strange. Hopefully I don’t have to constantly open the menu to switch out items in the full release… I have to imagine they’ve balanced this with modern sensibilities in mind, but only time will tell.

I must also mention the fishing mini-game I came across that reminded me of Breath of Fire (yes, “Fire”. Not “The Wild”). In the small lake in the village there were different sizes, types and colors of fish to catch. Sadly, I couldn’t nab the big guy swimming around. I’ll have to get my Breath of Fire techniques down and maybe even get a better “equip lod” in the future.

As I progressed through the demo, the mysterious Owl assisted me by emphasizing the story beats and keeping me on track for my next objective. He was a great accompaniment to remind me of the narrative with the Windfish, and he even added to the mystery. The importance of the story was reflected in the demo, as it didn’t even end with a boss battle, but rather upon completing a quest where I obtained a key to enter the upcoming dungeon. This brief and weird quest with Tarin turning into a mischievous Raccoon from eating bad mushrooms certainly told me that this might be a bit of an odd game… and I’m totally down for it.

Though I didn’t spend much time talking with NPCs, what I had seen of the dialogue was well written. There’s a particular thing that I really wish more games would do, and it’s in Link’s Awakening: localizing a character’s accent. As a translator myself, I read a lot of Japanese text that has plenty of personality in it by way of speech patterns. I sometimes see these little flairs mellowed or muted when translated, but the localization team has done a great job on Link’s Awakening in this regard. For example, when I woke Tarin up from his transformation, he said, “The last thing I kin remember was bitin’ into a big, juicy toadstool… Then, I had the darndest dream… I was a raccoon! Yeah, sounds strange, but it sure was fun!” With these speech patterns, I as the reader instantly got a feel for the character in just one sentence: he’s probably a loveable blue-collar guy who’s a little clumsy or prone to trouble.

I’ve been a little harsher on Link’s Awakening compared to my impressions of the other three Nintendo games in this E3 series, but I think it’s because I was most excited for this one out of Nintendo’s demo offerings. I was impressed by a lot of what the game had to offer in the demo, and most of my little problems are things Nintendo can fix in development. I do hope these things are remedied before the retail release, otherwise it will end up a marred experience for me on an otherwise excellent game. I certainly accept that the gameplay isn’t going to innovate the genre, but I’m excited to see how the dungeons are designed and how the dungeon “building” mechanic works out. Basically, everything that’s not in the demo…