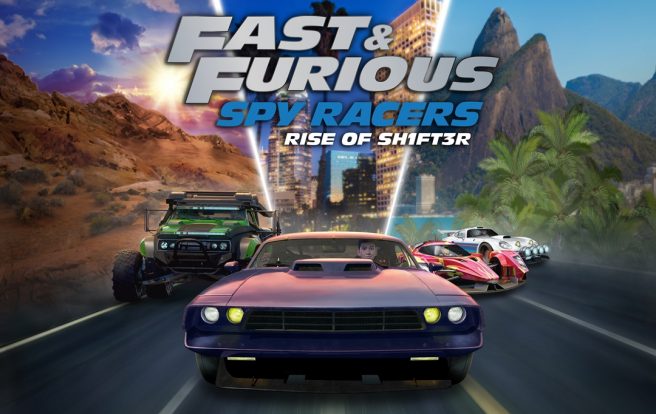 Below is some additional information and the announcement trailer:

Inspired by the Universal Pictures and DreamWorks Animation series Fast & Furious: Spy Racers, Fast & Furious: Spy Racers Rise of SH1FT3R brings the intense action from the show to consoles and PC for a thrilling, globe-trotting, racing tournament. Featuring show-stopping tracks set in five incredible locations including Los Angeles, Rio de Janeiro and the Sahara Desert, the game allows players to use high-tech spy gear to gain the upper hand in the game’s story mode and features online and split-screen multiplayer races for up to six players,

The elite criminal racing gang, SH1FT3R, returns in the game and it’s up to the Spy Racers team to stop them from winning the ultimate cutting-edge vehicle that will cause chaos in the wrong hands. Players will go undercover and race as their favorite characters, including Tony Toretto, Echo, Cisco, Layla Gray, or even race as the notorious SH1FT3R gang including Shashi Dar, Moray, Rafaela Moreno, and more. Fans can use spy weapons to speed through secret shortcuts and personalize customizable cars with a range of skins.

– SH1FT3R IS BACK – Race as fan-favorite Spy Racers characters, including Tony Toretto, Echo, Cisco, Layla Gray, or even race as the notorious SH1FT3R gang during multiplayer mode. Use innovative gadgets to gain the upper hand and tear up the tracks in a globe-trotting tournament in story mode, couch co-op, or online multiplayer.
– COUCH CO-OP AND MULTIPLAYER – The Spy Racers must show the whole world they’re the fastest, coolest, and most talented racers! Customize vehicles with unlockable skins and race against online opponents, AI-controlled drivers, and friends with couch co-op and online multiplayer.
– FIGHT TO THE FINISH LINE – It takes more than speed to win this racing challenge. Armed with 15 spy gear weapons inspired by the Netflix original series, the Spy Racers need to blast past rivals to earn victory.