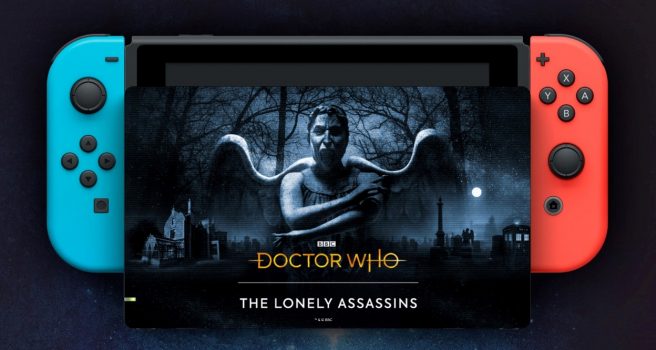 Update: Our giveaway has come to a close. Congratualtions to MilkyWay! We appreciate all of the entries. Stay tuned for more giveaways in the future.

Doctor Who: The Lonely Assassins, a mystery game featuring the terrifying Weeping Angels that was made by the developers of Sara Is Missing, recently saw its debut on Switch and other platforms. We’re now celebrating its release with a special giveaway.

One lucky reader will win a special edition Switch. The dock is wrapped in a skin featuring key art from Doctor Who: The Lonely Assassins, as pictured above.

We’ll be running the giveaway starting today through October 10. Those that are in the US and the UK are eligible, and to enter, simply leave a comment below that mentions which portrayal of the Doctor has been your favorite in the series thus far.

A winner will be selected on October 11. We’ll be following up with the winner in the comments, so please keep an eye out. If we don’t hear back within 24 hours, we’ll need to pick someone else.

For those that haven’t been keeping up with Doctor Who: The Lonely Assassins, check out the following overview and trailer:

Doctor Who: The Lonely Assassins is now available on Switch. You can access the game’s official website here.