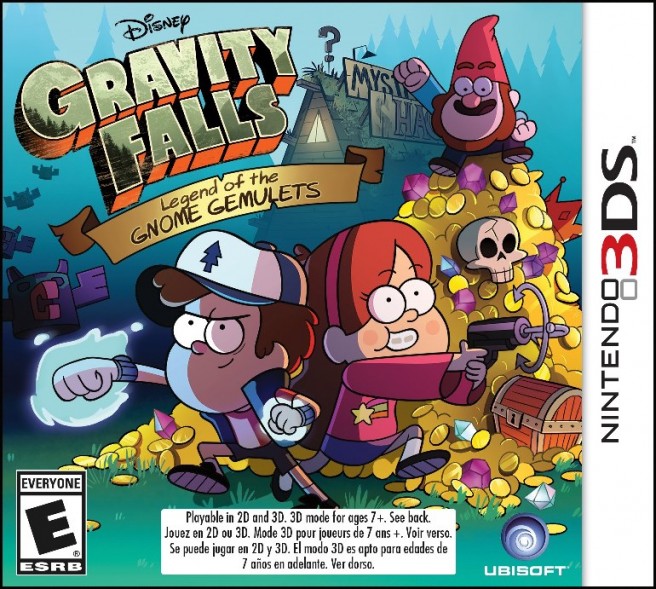 We have a whole bunch of content pertaining to the just-announced Gravity Falls: Legend of the Gnome Gemulets. The game’s boxart is above, and below you’ll find a fact sheet and screenshots.

For the first time ever on Nintendo 3DS™ handhelds, explore the strange and mysterious world of Gravity Falls! As the intrepid Pines twins, Dipper and Mabel, you must help Jeff the gnome retrieve the ancient Gnome Gemulets, which were stolen from the Gnome Forest.

Without the power of the Gemulets, the forest’s magic will die! Motivated further by the promise of gnome gold and equipped with enchanted gnome weapons, the kids will have to fight off strange new creatures, defeat monstrous bosses, and traverse all kinds of labyrinthine landscapes in their quest. Meet characters like Soos, Grunkle Stan, Old Man McGucket, and others along the way in this fun action-packed game for all ages.

ENTER THE WORLD OF GRAVITY FALLS
Gravity Falls: Legend of the Gnome Gemulets, powered by the acclaimed UbiArt Framework game engine, brings the look and feel of the show to Nintendo 3DS systems. Lush backgrounds and beautiful graphics allow you to explore your favorite places from the show, such as the Mystery Shack and the Gnome Forest, like never before!

PLAY AS BOTH DIPPER AND MABEL
Help the siblings work together, with dual character gameplay. Switch between characters at any time and use their unique powers and abilities to complement one another:
• Dipper is bestowed with Gnome Battle Cuffs which deliver powerful punches at close range, and keeps his trusty flashlight by his side to shed light on the many mysteries in Gravity Falls.
• Mabel wields the Fleece of Bedazzlement that lets her whip her sweater sleeves to attack monsters from afar, and her grappling hook is at the ready to help access areas otherwise out of reach.
Defeat enemies, solve puzzles, and explore new and mysterious areas with teamwork and cooperation!

SOLVE AN ALL-NEW MYSTERY
Gravity Falls: Legend of the Gnome Gemulets features a new, original adventure. Unravel the mystery to learn new lore about the inhabitants of Gravity Falls and unlock secrets of the town’s past.

MADE IN COLLABORATION WITH CREATOR ALEX HIRSCH
Creator and executive producer of Gravity Falls, Alex Hirsch, brings the show’s signature humor and fan-favorite elements to the game. Involved throughout the development of the game on character design, artwork, story, and script, Alex has helped to create an authentic experience for fans.