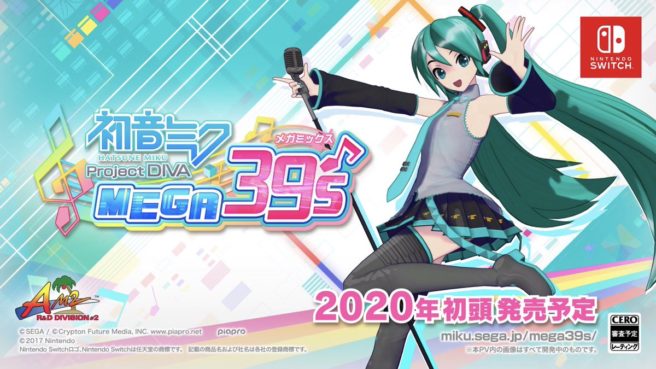 Earlier this month, SEGA unveiled Hatsune Miku: Project Diva Mega39’s. This will be the first entry in the rhythm series for Nintendo’s console.

Following the announcement, Japanese magazine Famitsu spoke with creative producer Makoto Osaki and producer / director Keiichi Matsunami to learn more about the game. The two developers spoke about the project’s origins, how they went about choosing songs, settling on the visuals, wanting to use the Joy-Con, and more.

You can find our full translation below.

Giving something back to the fans

First off, let me just say congratulations on the tenth anniversary of Project Diva. Mr Osaki, it has been a full ten years since the days when even you weren’t able to get a copy of the game due to shortages, but how do you feel about the state of the series now?

Osaki: I never thought it would still be going ten years down the line! Obviously Project Diva was only possible because of the Miku IP that Crypton Future Media own, but getting to the point ten years later where fans of the Miku IP are just as familiar with Project Diva is amazing and something I am really grateful for. It’s even more impressive given this isn’t a regularly releasing Sega title like Sonic, Phantasy Star or Yakuza. Our success is down to the loyal support of our fans and also the staff ensuring the games are high quality time after time.

When did Mr Matsunami get involved with Project Diva?

Osaki: When we were thinking about launching the arcade version of the game, the first person I talked to was Matsunami. I was like: “Can you lend me a hand?” (laughs) Then we went to went to Kataoka (Hiroshi Kataoka, executive manager, SEGA Arcade) and told him what we wanted to do. He told us: “the sooner you release the better.”

Matsunami: I’ve acted as director for a lot of the home console titles, but when I saw how popular the edit mode was when it first appeared on the PSP, I talked to Osaki about porting that aspect over to the arcades. So much has happened since then. There have been live performances and even videos produced for the NHK New Year’s show… All of that widening appeal being generated by our little rhythm action game is both surprising and exciting. Although the first live performance (Miku Fest, August 31, 2009) we did was really difficult, since we were making a game at the same time.

Osaki: True, we didn’t finish the video for that until around the 17th of August. And the email asking us to do it didn’t even come to us until the 12th of July. I still have it saved on my computer. (laughs)

Wow, that’s a tight turnaround. I can imagine doing that and making the game at the same time was a real pain.

Osaki: Those three years following the release of the arcade version were all pretty tough. We had to work really hard to keep up.

Matsunami: I always remember the conversation I had with Osaki as we drove back from playtesting one of the arcade machines. It was still before the arcade even opened but there were so many people already queuing outside. I turned to him and said: ‘we did it.’

Osaki: I was also happy to see so many women in that crowd.

Ten years on from that hectic development cycle, we were at the point where many fans were asking when the next title in the series would come out. Those questions have finally been answered. Can you tell us when this project began?

Osaki: With the Switch doing so well on the market, there were proposals early on to try making a new title… but it took us some time to decide exactly what type of game we should make.

Matsunami: Basically, we started work on the game at the beginning of last year.

Osaki: Since the response to the PS4 port of Future Tone was far more positive than we expected, there was an element of us making a new game as a way to give something back to those fans. And, since Project Diva was originally a portable game, we thought it really suited a console that had that ability, such as the Switch.

Matsunami: I also thought that, if we used the Joy-Con, we could invent new ways to play. But since that just doing that would not be enough to warrant a new title, we decided to give each song its own animated style rather than the old photo-realistic one. We also wanted to see the songs with this new non-photo realistic style.

While probably just porting the game over to the Switch as it is would satisfy many fans, also adding all of these new modes and visuals… I think maybe only AM2 would go to such efforts.

Matsunami: The idea of a straight port also came up, but we thought that would leave the fans feeling disappointed.

Osaki: We do have a tendency to take these things too far… (laughs) but that’s also fine with us. If we don’t put all of that thought into the game, then it will never reach the heights we want it to.