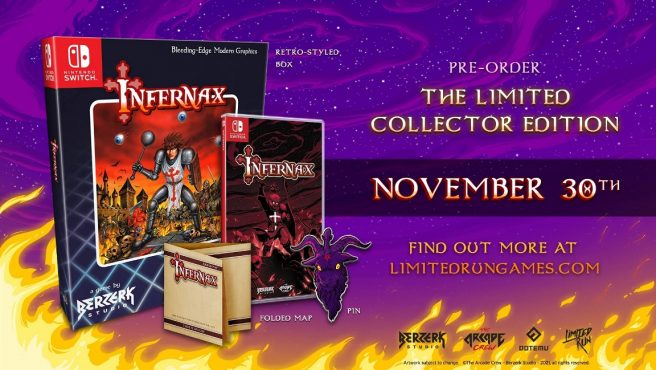 Infernax is getting a physical release, it’s been revealed.

Limited Run Games and Merge Games will be in charge of the boxed versions in North America and Europe respectively. Both are offering a standard version and collector’s edition.

Infernax follows Alcedor, a famed knight who discovers an unholy magic has spread throughout his land while he was away. Armed with a skull-splitting mace and a trusty shield, Alcedor vows to obliterate the grotesque beasts roaming his home in an epic side-scrolling quest recalling the essence of classically difficult action-adventure games.

Alcedor gains experience and gold vital for obtaining powerups as he slaughters foes, levelling up stats and learning new skills and weapons to help paint the screen red with blocky splatters of blood. Morality-testing decisions made during his quest prompt consequences later in the adventure and influence which of the game’s multiple endings players witness. Infernax’s open world-style design is packed with secrets awaiting discovery by its most kickass players, offering a satisfying reward for those skilled enough to endure a brutal challenge.

– Multi-endings based on player’s decisions.
– Challenging castle-dungeons and lots of boss battles.
– Ruthless bloodthirsty monsters that want you super duper dead.
– Level up system to tailor your experience to your liking.
– Buy new items and unlock skills to help you in your quest of reversing the curse.
– A dangerous and unique open world with many secret areas to uncover.
– Pucker up buttercup because it’s about to get gory.

You can pre-order the physical versions of Infernax from Limited Run Games here. Merge Games (as Signature Edition) has them here.