Inti Creates on Luminous Avenger IX’s development and why no Gunvolt 3, Bloodstained: Curse of the Moon talk 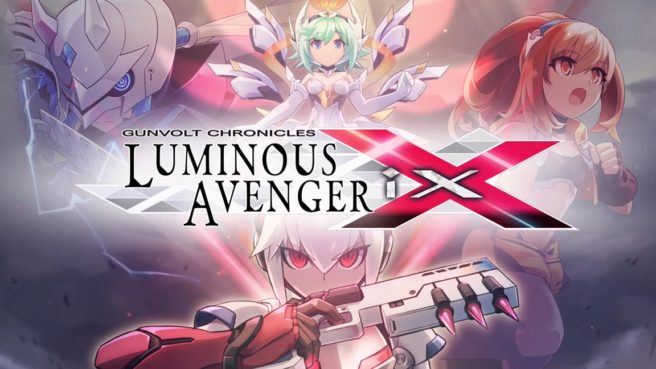 At BitSummit a few months ago, Inti Creates revealed a pair of notable projects. Bloodstained: Curse of the Moon was announced and subsequently released a couple of weeks later while Gunvolt Chronicles: Luminous Avenger iX is much further off.

Game*Spark caught up Takuya Aizu shortly after the two games were made known. Not many had the chance to ask Aizu about Luminous Avenger iX in particular, so the interview is pretty noteworthy. Aizu discussed the project’s development status and why we’re not seeing Azure Striker Gunvolt 3 yet, among other things. There’s some Bloodstained: Curse of the Moon talk sprinkled in as well.

You can read our full translation from Game*Spark’s interview with Aizu below.

So, Mr. Aizu, please tell us about why you decided to present two games at this year’s BitSummit.

Aizu: Well, to start, we presented Azure Striker Gunvolt at BitSummit 2014. BitSummit is where most of the Gunvolt announcements come from, in fact – things like new games, so on and so forth. To that end, we had decided that we wanted to present Luminous Avenger iX from the beginning, but Curse of the Moon was already so close to its release on the 24th that we decided to show it off together with Luminous Avenger iX. Announcing a release date and price would probably cause people to over-speculate when it comes to the content, so we presented Luminous Avenger iX as a title that development had just started for.

When did Luminous Avenger iX’s development begin, then? How long are you expecting it to continue?

Aizu: We started at the beginning of the year, so I’d say we’re probably about… Ten percent done. If you asked the director though he’d probably say something more like five percent. (laughs)

And about the iX in the game’s title… At any point did the similarity to Mega Man X occur to you?

Aizu: I actually hadn’t thought of that – the director might have been fairly conscious of it, though.

About how big is iX’s development, scale-wise?

Aizu: For Gunvolt games we usually have around six or seven people working on the characters, the world, the gameplay systems, etc. From there development only gets bigger, until we have around 40 people working on the final product. When iX was still in the conceptual stages of development, we felt like we should take the time to focus on strengthening the game’s core concepts. We’ll usually announce something after we have around two to three in-game stages done. It’d be quite unusual for Inti Creates to announce something that hasn’t even left the core stages of development yet.

After playing the demo I can’t imagine that it’s only ten percent done – it seemed so complete!

Aizu: We’re essentially co-opting Copen’s system from Azure Striker Gunvolt 2 for this game, but as development progresses we’re considering how we can make those new and fun to play, almost like an evolution from Gunvolt 2. That evolution is no small feat for a development team – we’re working off of the basic idea that you can “play as Copen,” and I think that desire to make it seem as if it’s almost a new series is where that five percent comes from. (laughs)

How long were the development cycles for your previous works?

Aizu: I think they were a little long due to how much time we spent in the conceptual stages – for Gunvolt it was around two to three years, and for Gunvolt 2 I think it was around two years as well. So, we basically put a game out every two years – but not all of that is strictly spent on the game’s development, however. For example, during that time we also had to put out a version for release on Steam. Considering that this – Luminous Avenger iX – is essentially a new series utilizing a new system, development may take a little longer than usual.

The Gunvolt series is known for its strong stories; how much time is actually devoted to writing?

Aizu: We come up with the story fairly early-on in development. Since it has to mostly be finished before we enter production, we spend about six to eight months at least to a year at most on fixing everything up. I personally haven’t heard whether the game will follow the same story as in the original series, but since it’s a new series I suspect that it’ll be noticeably different from Gunvolt’s story.

Gunvolt has appeared in various other titles as a guest; are there plans to have him make any more appearances in the future?

Aizu: Big-name developers aren’t so interested in Gunvolt, but I have gotten offers from other indie companies and developers! (laughs) When we get the first email, we usually reply, and if nothing comes of it then that’s that. If we keep talking with the other developer, however, we work off of that! We don’t refuse any offers that come our way, necessarily.

Regarding 2D side-scrollers, do you think there’s a large difference in interest between Japan and overseas countries?

Aizu: I don’t think so. I don’t really think it’s a niche genre compared to say, shooters, or something like that. The people who like it are going to like it to the end, and the people that don’t like it are a bit difficult to pin down. I find myself wondering things like “is it the side-scrolling action?” I’d imagine that the ratio of people who love 2D side-scrollers to the general gaming population doesn’t change much between Japan and overseas countries. I would say, though, that since there are more gamers abroad there’s got to be some kind of difference.

This is more domestic-focused, but what has the response been like from younger people, particularly those who started off with 3D games?

Aizu: Although it has been considerably less so since the move to the 3DS, we’ve released side-view action games like Crayon Shin-chan alongside Bandai Namco for systems like the DS. Every year we sell about 100,000 units; there’s no situation in which one of the games we made wasn’t played. In that sense, I think limiting ourselves primarily to Nintendo hardware has allowed us to cultivate a new userbase.

The fact that gaming hardware is losing sales to smartphones nowadays, and the fact that most smartphone-focused gamers have never even touched the buttons on a controller – much less played an action game – is kind of troubling to me. Right now, there are people who have been playing since anywhere from elementary to high school off and on, I think; to that end, most of our consumers are in their mid-to late-20’s. Those statistics are from about two or three generations ago, though, so the primary demographic may be in their 30’s now!

Luminous Avenger iX isn’t Gunvolt 3, is it? What’s your reasoning behind that?

Aizu: This may make him a bit angry, but the director of the Gunvolt series – Yoshihisa Tsuda – is having a bit of a tough time coming up with Gunvolt 3. I’d think it’d be difficult for anybody who isn’t Tsuda to come up with a suitable next entry, so to keep fans from having to wait forever, we’re busy working like ants to release a spin-off title. That’s not the whole of it, but it’s what we can tell you today!

Is Tsuda-san involved in the development of iX in any way?

Aizu: He’s mainly acting as an observer this time, so some of that special “Tsuda touch” is missing.

The Gunvolt series started out on the 3DS, but this new title is being developed for Nintendo’s newer hardware, right?

Aizu: That’s right – the biggest reason for that being that we just have a lot of Nintendo fans among our staff! Another reason is licensing, for example: if you make a game for a smartphone, you can release and sell it without receiving licensing from anybody, but to release it on a host of different consoles you’d also have to go through an equal amount of different companies to get the game licensed – it’s almost like counting calories! At the time of the first entries in the series it was hard to put our games on any hardware, but now its popularity has made it possible to put them on all kinds of hardware.

But, like the choices that go into counting your calories, we also have to make a choice as to where to put Gunvolt! For bigger companies, they can readily make games multiplatform, but for a smaller company like ours that kind of thing really isn’t possible. So, when we tried to narrow down on a platform, we realized a lot of the staff grew up on Nintendo consoles, so we directed our attention to Nintendo’s hardware.

During the development of Azure Striker Gunvolt, our company was being subcontracted to make 3DS games – we were basically accumulating know-how. More and more people would join our staff having seen our work on the 3DS, and a lot of people joined wanting to continue with that trend. So as more people joined that were invested in our work on the 3DS, we concentrated more on that! (laughs) Now that we’re making action games on the Switch, people will become invested in that and want to work with us on Switch games. So, we’ll keep on doing just that! Creators are people too, and we have our biases, so we tend to make things that we ourselves would want to buy, I think.