[Let’s Talk] Reflecting on the end of 3DS 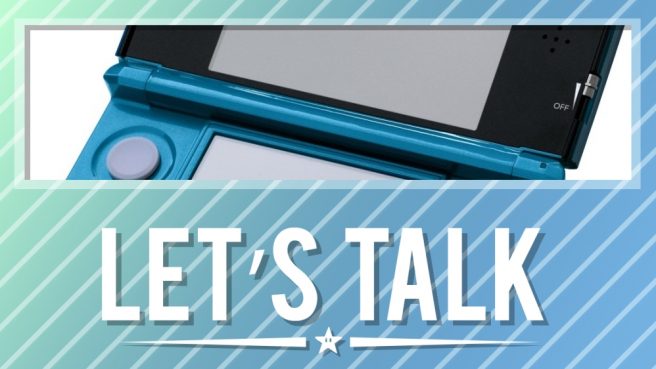 It was about a month ago that Nintendo announced that it’s sunsetting the 3DS. Production has discontinued, meaning no additional units will be shipped to stores. Developers can still technically release new games and the eShop will remain online, but for all intents and purposes, the 3DS’ life cycle is over.

The 3DS originally launched in 2011, so it’s been around for nearly a decade. A massive amount of titles have been released over that span. From Nintendo itself you’ve got games like Super Mario 3D Land, Zelda: A Link Between Worlds, Fire Emblem Awakening. Third-parties supported the system with Monster Hunter, the Bravely series, and Shin Megami Tensei IV.

In terms of hardware, after the original 3DS, we saw the 3DS Lite, New 3DS/New 3DS XL, 2DS, and 2DS XL. We can thank the 3DS for introducing us to portable gaming in 3D without the need for glasses, the eShop, StreetPass, and more.

With so much history behind it, we wanted to take a brief moment to reflect on the 3DS. What are your personal favorite games for the dedicated handheld? Do you have any particular memories you’d like to share? Let us know in the comments below.

Highlights from last week’s topic: Nintendo releases you’re buying for the rest of 2020

Finished up Final Fantasy Adventure just about an hour ago and starting Octopath Traveler finally. Having a lot of fun with SMB 35. It’s so fun to jump into a few times a day. I really hope they change course and make this game permanent.

I started Ys Origin today, up to the second boss on Hard. This style of Ys is just so smooth and addictive.

Got my Halloween list for this year set up. Going to actually play Luigi’s Mansion and The Missing on Switch, Man of Medan on PS4, and if time allows might do Resi 7 on GamePass.

I’ve dumped about 70 hours into Hades in the last two weeks. I believe it will join Celeste, Sayonara Wild Hearts, and Hyper Light Drifter on my list of “randomly turn on when I want to chill and zone out,” games. Which for me is like the tier immediately below Zelda games.

Been playing Smash with a friend from Mexico for a few months now. Recently his other friend joined and we play at least a few matches almost everyday. I’ve been playing as Terry because I always wanted to get good with him and learning the command inputs is really fun and satisfying to pull off. Still haven’t quite mastered the transition between jabs into Buster Wolf but I’m getting there. Jabs into Power Geyser is a lot easier to pull off though. Overall he’s awesome and I’ll definitely be picking up his amiibo.