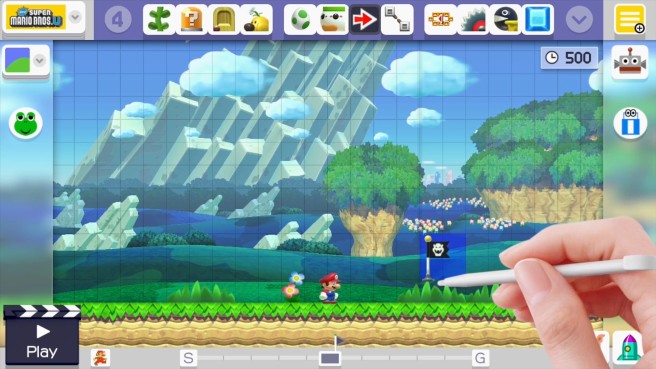 USGamer recently caught up with Super Mario Maker producer Takashi Tezuka and co-directors Yosuke Oshino and Yoshikazu Yamashita. Much of the discussion focused on the game’s brand new update. Topics include how the checkpoint system came about, whether or not we’ll see other updates in the future, and the possibility of extending the “Maker” idea to other series/concepts.

Head past the break for a roundup of these interview excerpts. You can also read up on the full talk here.

On what inspired the update…

Tezuka: Today’s update is actually something we had already been considering during the game’s development. We had an overall idea of wanting to increase people’s interaction with and enjoyment of the game after its release, and the update being released today was one of the ideas that came out of those discussions.

Regarding the specifics of today’s update, we have a feature called Costume Mario in the game and thought it would be a good idea to increase the number of Costume Mario characters available. Also, you’ll have hopefully noticed that we’ve introduced something called Event Courses with this update that allow us to promote courses with different partners that we hope people will be excited about. And a third element to the update is the addition of the checkpoint flag item. This checkpoint flag is something that will allow players to create save points in courses.

And finally, we have the conditional power-up item that allows small Mario become Super Mario if he hits the Question Block, but if he’s already Super Mario that same Question Block will give him a Fire Flower. This was something that was in the original Super Mario Bros. and was something designed by Mr. Nakago, a staff member here at NCL. He was somewhat persistent about making sure this was implemented in Super Mario Maker as well—going so far as to say, “It just wouldn’t be Super Mario without it.”

On how many additions are based on fan feedback vs. what they couldn’t work into the launch version…

Tezuka: The checkpoint flag’s inclusion was specifically to address voices in the community that we’ve seen calling for it—demanding it, really.

Oshino: Well, the event course and accompanying Costume Mario additions to the update were something that, as Mr. Tezuka also commented, we had been planning during the game’s development. But with the checkpoint flag, we weren’t sure if it was even possible. We did look into it, though, and right around the day the game was released we immediately began seeing user demand for it. So we looked more seriously into idea of including it and eventually were able to come up with a way to put it into the game.

Yamashita: As Mr. Oshino says, costumes and event courses were something we’d planned during development. But originally, with the checkpoint flag, this was something we thought wouldn’t be possible, too difficult to include. Once we saw the strong response on the Internet, we realized we needed to look into the issue again and press forward to make its inclusion possible.

As for the context-sensitive power-ups, as Mr. Tezuka mentioned, we had heard from Mr. Nakago about including it—especially for the 10 Mario Challenge mode in which you play through a series of 10 courses, as we felt it would be particularly important for that mode. But we felt it would be entirely too difficult to implement and therefore decided not to include it in the initial retail release. But we were surprised to hear from Japanese users in particular that this was something that they would enjoy having in the game. So it became an example of an inclusion in the update that we had an internal request for, from Mr. Nakago, but also because we saw so much user interest in it once the game was released.

On whether there will be other additions to Super Mario Maker…

Tezuka: We do expect to hear continued requests from the community and the player base, and one of our biggest goals is to get as many people as possible to enjoy Mario Maker. We definitely want to fulfill these requests, but we can’t promise anything at this time.

On whether the “Maker” idea only works for Mario, or if it could be applied to other series/concepts…

Tezuka: The concept for this game really started with Mario and the kinds of actions you do in Mario games, and we felt the Mario series was really well-suited to a game of this type. During development, we did hear opinions like, “Wow, a Zelda Maker or something like that would be a great idea!” But, in thinking about it, it didn’t seem like something that would be quite as easy to make or to play.

Yamashita: As a player and a user of Super Mario Maker myself, I have a lot of ideas and would love to see them all made. But as a developer of the game, I definitely have the same opinion as Mr. Tezuka. While a lot of these ideas are really appealing, the idea of implementing them and making sure they’re fun to play is a real challenge.

That said, also speaking as a developer, taking on difficult challenges like that has an appeal all its own!