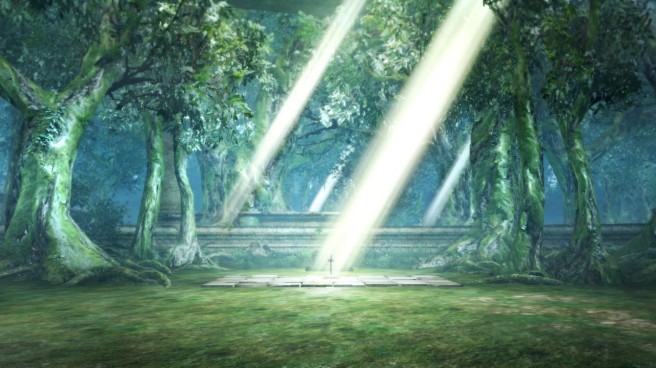 This week’s issue of Famitsu has another update on Hyrule Warriors. While Monday’s Hyrule Warriors Direct beat the magazine to the punch with new character reveals, there is an update on some other portions of the game such as stages. The official website provides more information as well.

There are three stages detailed this week worth mentioning: Gerudo Desert, Temple of the Sacred Sword, and Palace of the Mind. Each is an original stage for Hyrule Warriors, though they share the atmosphere of Zelda games. For instance, Twilight Princess has the Gerudo Desert, and the Temple of the Sacred Sword is a close image of the Lost Woods in A Link to the Past.

Gerudo Desert is located in the eastern part of Hyrule, in front of Death Valley. In the desert there is the Gerudo Tribe’s village, but it has turned more into a home for monsters.

At the Hyrule’s west end, there was once a beautiful city that has now turned into ruin. In those old ruins lies the Temple of the Sacred Sword where it seems like time has stopped. Link pulls out the Master Sword here which only heroes can wield. The sword soon starts to shine, almost like a sign of recognition.

The Palace of the Mind exists in a different space and suddenly appeared in this world. In the garden, there are roses that bloom in profusion with an eerie color regardless of the season. Strangely twisted trees with a tentacle-esque shape also grow here.

The palace itself has open holes which are connected to a deep abyss of a mysterious space. Some structures of the palace are also twisted. People who are present near the abyss holes will feel anxiety emerge from the bottom of their hearts.

It is implied, but not confirmed, that the palace isn’t real. Rather, it seems to be someone’s mental world that has taken the form of a building and it is realized in another space. The mind of the “palace owner” is riddled with obsession, hatred and jealousy, which in turn has given rise to the twisted madness that reigns him/her.

Famitsu has a couple of story bits as well. In the game, Ganondorf calls back both Zant and Ghirahim, who swear to obey him. The magazine also confirms that Link, Zelda, Sheik, Impa and Ganondorf are from the Hyrule Warriors universe and not from other Zelda universes.