Panic Button on the long wait for Switch version of Doom Eternal, most challenging port for the system so far 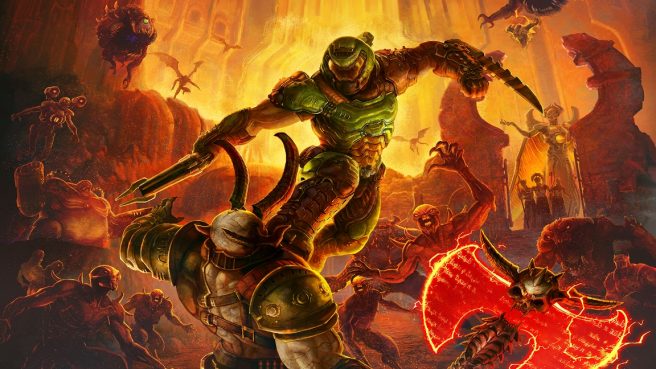 If everything had gone as planned, Doom Eternal would have launched on Switch a year ago. The game was originally planned for release on all platforms in November 2019. It was pushed to March 2020 on most systems, but the Switch version has long been missing in action. Now after a lengthy wait, it’s almost here and is scheduled for December 8.

We recently had the chance to speak with senior producer Cody Nicewarner and lead engineer Travis Archer at Panic Button about the new Switch version of Doom Eternal. When asked why the port took longer than some may have been expected, the two developers said:

“When we took on the project we knew that Doom Eternal was going to be a large undertaking that would require every ounce of experience we had. We’ve obviously had previous experience working with the idTech engine to bring games like Doom (2016), Wolfenstein 2: The New Colossus, and Wolfenstein: Youngblood to Nintendo Switch. But Doom Eternal is on another level entirely. Marty Stratton and Hugo Martin have both talked about Doom Eternal being one of the most ambitious projects in id Software’s history, and we couldn’t agree more. Faithfully recreating that ambition for Nintendo Switch players took a little extra time. We’re confident it will be worth the wait!”

We also asked if any factors impacted development such as the coronavirus. In response, Nicewarner and Archer explained:

“Other than the sheer size and ambition of the game we did not encounter any unique factors that impacted development.

However, like many other companies, we face the challenges of a work-from-home environment. Our company reacted early and has kept the health and safety of our employees as a top concern. With that transition, we were forced to deal with an unfamiliar work environment, but with some collaboration and support from id Software and Bethesda, we were able to quickly adapt and accomplish the goal of bringing Doom Eternal to Nintendo Switch. We are very excited about it and look forward to launch!”

It should be clear based on these comments that bringing Doom Eternal to Switch wasn’t an easy task. Panic Button did confirm to us that this has been the team’s most challenging port for the system so far.