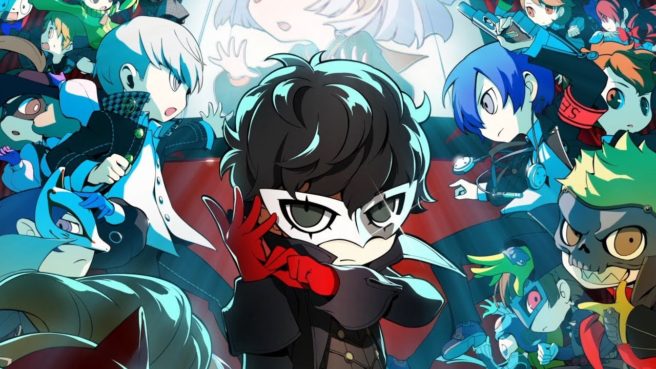 We’ve readied a full translation of both interviews. You can read the talks in full below.

Aihara-san, this is your first time appearing in our magazine, isn’t it? What kind of things are you responsible for managing in the Persona Q series?

Aihara: Well, Etrian Odyssey IV (2012) – which Kanada directed – was the first Atlus game I had a hand in; for that game I helped out with its events. Throughout Persona Q’s development, though, I was responsible for the game’s dungeons and quests (which are equivalent to this game’s “special screenings”). After that, I helped planned Persona 5’s “confidant” relationships; when Kanada had announced that there was going to be a sequel to Persona Q, I told him I wanted to be the director and he made it happen!

Kanada: We’ve been working together ever since Etrian Odyssey IV! I could tell Aihara wanted to work on the game, partly because of the fact that our seats are close together – he could look over and see what I was working on while I was planning PQ2’s proposal. (laughs) I knew he had the experience for the job, and more than anything else, I think I could really sympathize with him when he told me he wanted to do it. As the producer, this time I could mostly leave the game’s actual contents to Aihara and the others.

It’s as if the Persona Q tag-team came back to tackle PQ2! How did the fans’ reactions make you feel following the game’s announcement?

Kanada: I’ve been paying attention to a variety of things since the announcement, but the biggest thing must’ve been the fans’ reaction to the game featuring the female protagonist from Persona 3 Portable. We left her for the end of the game’s initial commercial on purpose, but the reaction from the fans was a lot bigger than we had expected! It caused a bit of a stir on social media too – there were a lot of people who were congratulating her on being in the game and showing their love for her.

Including her in the game though, that was you flexing your developer muscles, wasn’t it?

Kanada: Indeed. I’m sure you’d like to know what kind of role she’ll play throughout the story, and how she got lost in the cinema labyrinth in the first place… She appears in the first “movie world,” though, so how deeply she’s involved in the story will naturally unfold over the course of the game. That being said, when she reunites with her friends from Persona 3, they’re not exactly sure who she is… That’s the kind of development that’s in store for players; just a little information I was able to pass along in advance. That also includes a meeting with P3P’s male protagonist, so look forward to it!

Aihara: Not even just with P3P’s female protagonist, though – we can really feel the fans’ appreciation for the series as a whole. Even at TGS 2018, the character goods centered around PQ2’s cast were also met with a considerably warm reception. With 28 Persona users gathered together in one place, it was a bit difficult for us to implement them all within the story – that’s where the “special screenings” come in. In completing these “special screenings,” the player will come to make use of a variety of combinations of characters and techniques from throughout the series. They really are what helps the game feel more like a crossover, and it’s my hope that you can all enjoy them as a supplement to the game’s main story.

Everything from the Previous Game Has Been Improved

So, in the previous game, the game’s structure was based around the casts of Persona 3 and Persona 4’s viewpoints of a shared story – you had to take two “laps” through the game to experience all the content. In this game, though, there’s only one story based primarily around Persona 5.

Kanada: Right – when trying to come up with a story that merges multiple viewpoints without any discrepancies, you have to make the scenario more versatile. This time, though, we’re focusing more on the bonds between the Persona users and ensuring the depth of the story and other content more so than before. Especially when compared with the first game (which required two playthroughs), I think that this game’s overall playtime might feel a bit shorter. That being said, the sheer amount of content – events, character voices, animated cutscenes, music, etc. – is much greater when you set it beside the previous game. In terms of animation, there’s around twice as much as in the previous game, including previews for each movie world from the game’s main story. The game’s animation director – Takashi Kojima-san – went to great lengths to make sure everything from the storyboarding and onwards was suitable. (Pictured)

Aihara: That all applies to the game’s soundtrack, too. The previous game’s OST came on two CDs, while this game’s is spread out over three. Kitajō (the sound team’s Atsushi Kitajō) put in a lot of effort in working on the soundtrack for sure.

Kanada: When he was composing the soundtrack, us in planning would first send over a list of necessary songs over to the sound team. There were a lot of times where – while he was test playing – he’d say, “this scene needs a song that’s exclusive to it, don’t you think?” and would make it and add it in. We won’t know how many songs are actually on the soundtrack until development is over because of him… (laughs)

Aihara: One example of BGM being added in later would be during the “special screenings.” Despite it being the same dungeon, if a different BGM plays during a special screening there’s more of a unique feeling to it – whether the objective is to “explore” or “subdue,” I feel like it’ll affect the player’s tension. When I brought the idea up to Kitajō, he simply said “I’ve already thought about it!” (laughs)

That sounds fun! From beginning to end, this game sounds dense!

Kanada: Data-wise, proportionally we feel like it’s huge compared to the last game! (laughs) If I’m not mistaken, there were around 220 kinds of Personas in the last game…

Aihara: And this time there’s about 300!

Kanada: There are plenty of things that fans of the series will enjoy; Nagi, Hikari, and Doe – three incredibly important characters within the context of the game – will also make their first appearance! It’d make me happy if everybody could play this game to exhaustion; please, explore every nook and cranny!